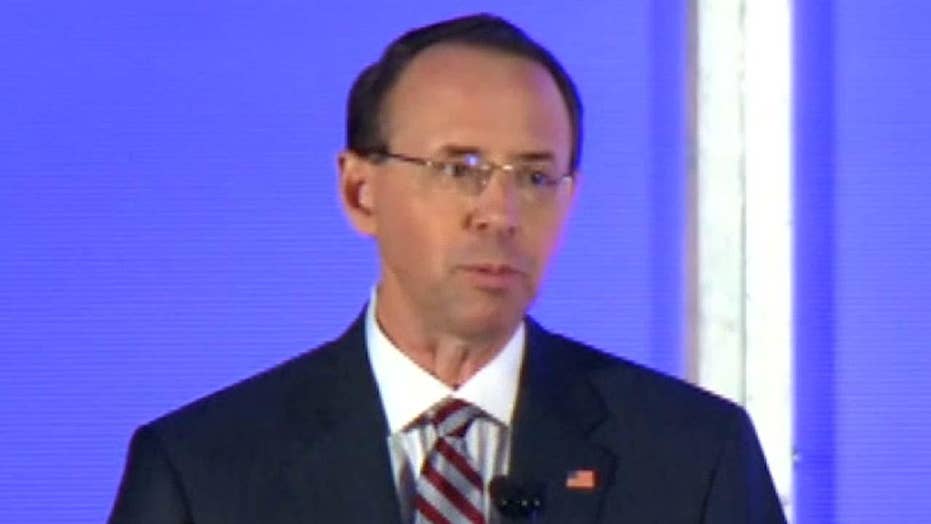 Rosenstein discusses his actions within the Department of Justice, Former Attorney General Jeff Sessions and the reaction to the sudden firing of James Comey.

Rod Rosenstein unloaded on former FBI Director James Comey in remarks to the Greater Baltimore Committee (GBC) on Monday evening, slamming Comey's turn as a "partisan pundit," reiterating that he deserved to be fired, and faulting him for trampling "bright lines that should never be crossed."

Comey also derided Rosenstein's "character" and suggested his "soul" had been consumed "in small bites." The former FBI boss, who has taken to posting numerous photographs of himself in nature staring wistfully at trees and roadways since leaving public office, had been showered with media attention in recent months, and his memoir earned him over $2 million.

"Now, the former director is a partisan pundit, selling books and earning speaking fees while speculating about the strength of my character and the fate of my immortal soul," Rosenstein said. "That is disappointing. Speculating about souls is not a job for police and prosecutors. Generally, we base our opinions on eyewitness testimony."

Although Rosenstein emphasized that he "did not dislike" and even "admired" Comey in the past, he asserted that the former FBI head's handling of the Hillary Clinton email investigation in 2016 was a grievous and defining professional error.

"The clearest mistake was the director’s decision to hold a press conference about an open case, reveal his recommendation and discuss details about the investigation, without the consent of the prosecutors and the attorney general," Rosenstein said. "Then, he chose to send a letter to the Congress on the eve of the election stating that one of the candidates was under criminal investigation, expecting it to be released immediately to the public."

Comey later said he felt compelled to hold the dramatic July 2016 news conference -- in which he said that "no reasonable prosecutor" would charge Clinton, even though he said she had been "extremely careless" in handling classified information -- because then-Attorney General Loretta Lynch had compromised the DOJ's appearance of impartiality by allowing Bill Clinton to meet her privately on an airport tarmac as the investigation was ongoing.

Rosenstein added: "Those actions were not within the range of reasonable decisions. They were inconsistent with our goal of communicating to all FBI employees that they should respect the attorney general’s role, refrain from disclosing information about criminal investigations, avoid disparaging uncharged persons, and above all, not take unnecessary steps that could influence an election."

WHY DID FBI SUBMIT FISA WARRANT APPLICATIONS THAT COPY-PASTED FROM WASHINGTON POST, CITED STEELE DESPITE SIGNS OF BIAS?

Rosenstein called his memorandum supporting Comey's firing "reasonable under the circumstances," and said he would have provided a more fleshed-out analysis of the "pros and cons" of terminating the FBI director had he been "asked to make a recommendation before the removal decision was made."

But, Rosenstein emphasized, Trump "did not tell me what reasons to put in my memo." The president repeatedly has suggested that Comey's refusal to acknowledge publicly -- as he had privately -- that Trump was not under investigation ultimately played a role in his termination.

Still, Rosenstein sounded a note of sympathy for the manner in which Comey was fired. The ex-FBI director reportedly learned of his fate from TV reports.

"If I had been the decision maker, the removal would have been handled very differently, with far more respect and far less drama," Rosenstein said, "so I do not blame the former director for being angry."

But, in another shot at Comey's deeply personal criticisms, Rosenstein went on: "My soul and character are pretty much the same today as they were two years ago. I took a few hits and made some enemies during my time in the arena, but I held my ground and made a lot of friends. And thanks to them, I think I made the right calls on the things that mattered."

The speech to the GBC -- a nonprofit association of business leaders that Rosenstein has credited with helping law enforcement, including when he was a U.S. Attorney -- was his second in as many years. It followed Rosenstein's remarks hours earlier to the University of Baltimore School of Law, in which he quoted Special Counsel Robert Mueller and urged graduates to stick to principles despite external pressure.

"So, that is some of what was going on when you gave me that award for courage in government service two years ago," Rosenstein concluded. "I probably did not deserve it at the time. I do not know whether I earned it since then. But I tried my best. It is nice to be home. Thank you very much."

Congressional Republicans have accused Rosenstein of intentionally withholding documents and information from Congress, failure to comply with congressional subpoenas and abuse of the Foreign Intelligence Surveillance Act (FISA).

In particular, Rosenstein was at the DOJ in June 2017 when the third renewal of the government's FISA warrant to surveil ex-Trump aide Carter Page was submitted. The FISA applications flatly accused Page of conspiring with Russians and included citations to media sources that traced back to British ex-spy Christopher Steele -- who was funded in part by Hillary Clinton and the Democratic National Committee (DNC).

The FISA applications did not state these connections clearly, nor did they mention new revelations that Steele apparently confided in the State Department that he wanted his since-discredited, now-infamous dossier to go public before Election Day in 2016.

A DOJ watchdog review of the department's FISA practices, among other issues, is expected to be completed within weeks.