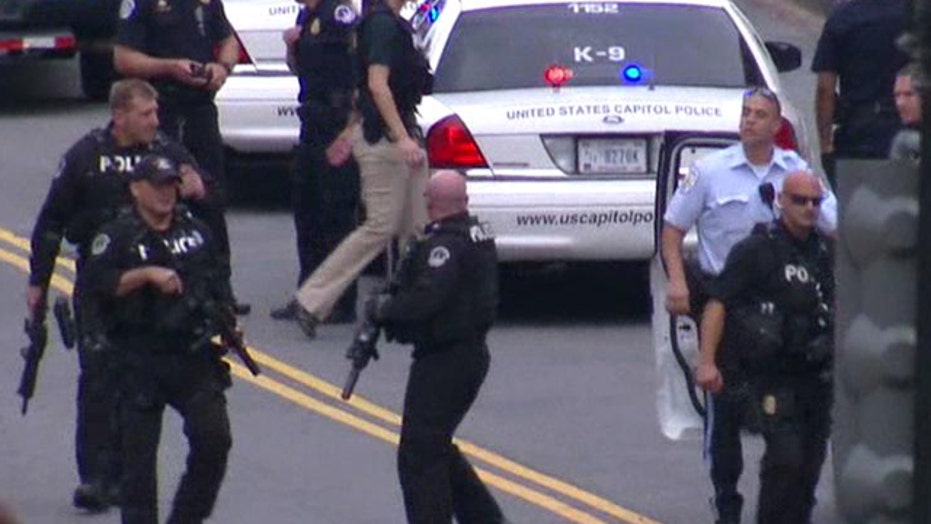 US Capitol on lockdown after reported shooting

A chaotic car chase that began when a woman tried to ram a security barrier near the White House ended with the suspect being fatally shot near the U.S. Capitol, in an incident that put the Hill temporarily on lockdown and caused what one witness described as "mass panic."

Police confirmed late Thursday that the suspect was killed after being struck by officers' gunfire.The Secret Service said she had a 1-year-old girl in the car, who was not injured.

D.C. Police Chief Cathy Lanier said officers acted "heroically." She said two officers were injured -- one from the U.S. Capitol Police, the other from Secret Service -- but "both will be okay."

Rep. Michael McCaul, R-Texas, chairman of the House Homeland Security Committee, told Fox News that the woman originally tried to run down a Secret Service agent near the White House. The Secret Service later confirmed the officer was struck by the woman's car.

In a statement, it also said multiple gunshots were later fired at two locations near the Capitol.

According to U.S. Capitol Police, its officer was injured in a related car crash.

The chase and subsequent stand-off near the Capitol went down as lawmakers were debating under the dome about the partial government shutdown. Officials said it appears the incident had "no nexus to terrorism."

Terrance Gainer, the Senate sergeant at arms, told Fox News that this appears to be an "isolated incident."Gainer also said the injured Capitol Police officer crashed a police cruiser while trying to join the chase. The cruiser "seriously clipped" a barricade, he said, but the injuries are "not life threatening."

The chase and stand-off caused panic on Capitol Hill, with sirens blaring inside the building and lawmakers and their staff being ordered to stay in place. The lockdown was later lifted. Returning to the floor late Thursday afternoon, lawmakers thanked Capitol Police and other security officers and gave them a standing ovation.

Officials said the incident began with a car chase, which started when the suspect, driving a black sedan with Connecticut plates, tried to ram a barrier near the White House.

Several police cars pursued her to a location near the Capitol building.When they boxed her in, sources said, the driver got out and five or six shots were fired.

David Loewenberg, who witnessed the incident, said he saw an officer "hugging a child and taking that child away."

"We were definitely caught off guard, we were scared," said Matt Knuppeo, who said he was touring the Capitol building when the stand-off unfolded. "It was mass panic for a while."

The developments come as lawmakers were debating a series of small spending bills, amid the ongoing partial government shutdown.

The violence follows the mass shooting last month at the Washington Navy Yard, where a gunman killed 12 people. The gunman also died.