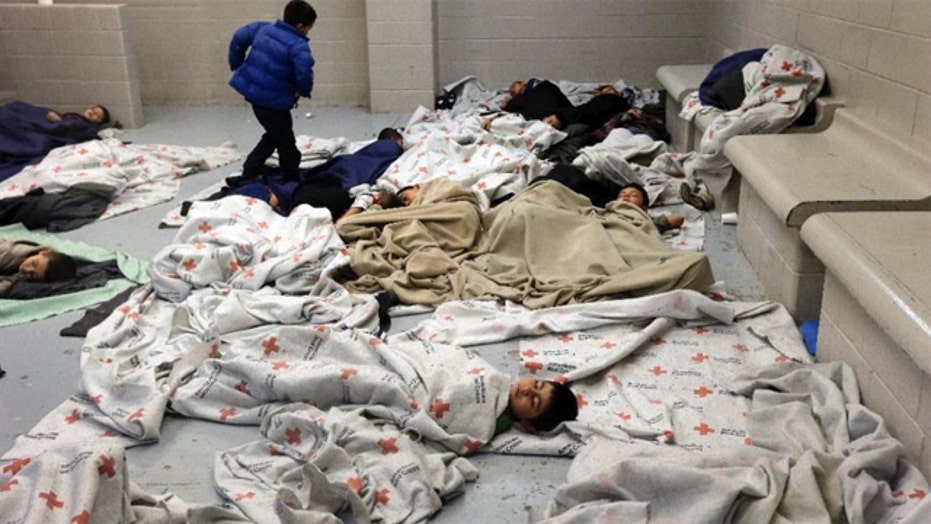 Inside the 'babysitting' and influx at the border

One Congressman reports what he found and talked to overwhelmed border agents when he visited the southern border, illegal immigrant facilities

The Obama administration, scrambling for billions in emergency funding to address the surge on the U.S.-Mexico border, is facing yet another accusation that it was asleep as a crisis evolved -- this time, the influx of illegal immigrant minors.

Federal statistics show that the number of unaccompanied children making the dangerous trek from Central America -- specifically Honduras, El Salvador and Guatemala -- began to pick up in 2012. It has steadily accelerated since. More than 50,000 total illegal immigrant children have crossed since last October, mostly from those countries. By one count, the estimated number of expected apprehensions this year would mark a 1,381 percent increase since 2011.

The administration is now elevating the response to a "crisis" level, tapping a central coordinator, sending Vice President Biden and Secretary of State John Kerry to meet with Latin American leaders and, now, requesting $3.7 billion in additional funding.

But House Judiciary Committee Chairman Bob Goodlatte, R-Va., claims the administration knew about the problem "for some time," and suggests the president should have been dealing with the governments of the Central American countries earlier.

"There is a lack of leadership, I think, on the part of the president in getting ahead of this issue, starting with dealing with the Mexican government and the governments of these three Central American countries and asking for their help," he told Fox News.

Rep. Henry Cuellar, D-Texas, in an interview with Fox News, even invoked the specter of Hurricane Katrina, and the George W. Bush administration's response to that disaster.

Reacting to Obama's decision, so far, not to visit the border during his trip to Texas on Wednesday, Cueller said he hopes this doesn't become his "Katrina moment."

The White House says the administration is now working closely with the Mexican and Central American governments involved to try and address the "root causes" of the problem and stem the tide.

"The steps that this government has announced ... over the last week or so are indicative of a pro-active approach to dealing with the situation," he said.

But Goodlatte, at a hearing called in late June to examine the roots of the surge, suggested the administration effectively waited until now to deal with the growing problem.

"It is often said that Nero fiddled while Rome burned. Unfortunately, it seems that Obama fiddles while our borders implode," Goodlatte charged, citing one account that the administration previously "hid" the crisis for fear it would imperil immigration legislation.

As for what is driving the surge, it's impossible to point to a single factor. Democrats and Republicans point to several, as they try to account for how a trickle of unaccompanied minors from Central America became a flood.

At the same June hearing, Democratic Rep. John Conyers, D-Mich., called the surge "a symptom of the real humanitarian crisis that's going on every day in ... Honduras, El Salvador and Guatemala," where he noted violence is "sky high."

"Honduras has the highest murder rate in the world and has had it for the last four years. El Salvador and Guatemala are close behind at fourth and fifth," he said.

But violence has been high in those countries for decades, and analysts point to other policy factors in Washington.

A Congressional Research Service report in June pointed to a landmark settlement in 1997 -- called the Flores agreement -- that set certain standards for how unaccompanied children caught crossing the border could be treated. Congress passed two laws addressing this, first in 2002 and then in 2008. Among the requirements in the law, minors from countries other than Mexico and Canada were to be transferred to the care of the Department of Health and Human Services.

This has led to a situation involving numerous agencies at different stages, each subject to certain laws and restrictions.

Republicans say the Flores agreement isn't the only factor, and point to a series of unilateral actions taken by the Department of Homeland Security easing deportations, particularly for those who came to the U.S. as children.

Media reports show that rumors have surged in Central America that women and minors can get a free pass in the U.S. While there is no such policy -- and the White House insists those crossing cannot expect to stay -- Goodlatte said the administration's executive actions have sent a message that enforcement is lax.

"So many of them are just coming and turning themselves in very willfully, knowing that, after they are held for a few hours, they are going to be released into the interior of the United States," Goodlatte told Fox News, faulting the president for letting the issue fester.

"He hasn't done anything during that time, it has magnified. We have now a 1,300 percent increase in the number of people since last year."