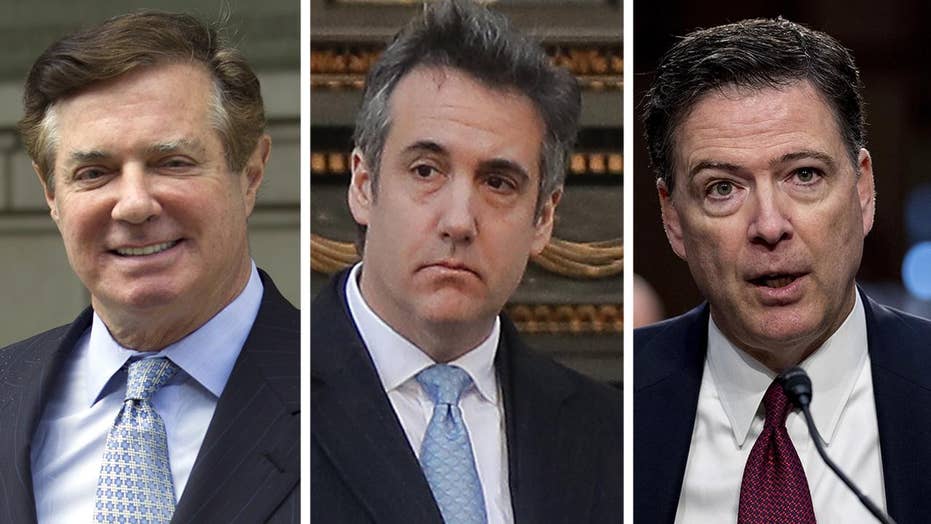 With multiple reports and other indications suggesting the long-running Russia probe that began in May 2017 is nearing its conclusion, Mueller faces court-imposed Friday deadlines to file potentially revealing memos outlining how Manafort allegedly broke his cooperation agreement with the government, as well as how Cohen should be punished for lying to Congress in 2017 about an abandoned Trump real estate project in Moscow.

Meanwhile, Comey is slated to testify behind closed doors before the House Judiciary Committee, after dropping his longshot legal challenge to congressional Republicans' subpoena earlier this week when they agreed to make public a transcript of his remarks.

Fox News has confirmed that a key focus of questioning will be Comey's decision to write the July 2016 statement recommending against filing criminal charges in the Hillary Clinton email probe before the former secretary of state was even interviewed, as well as the apparent political bias demonstrated in a slew of text messages and leaks by top FBI officials.

More than a dozen federal agents raided the home in search of documents on the bureau's failure to investigate Hillary Clinton. What is the FBI hoping to accomplish by keeping American people in the dark?

Republicans are also expected to ask about the comparably favorable treatment afforded by the FBI to Clinton advisers. In October, U.S. District Court Judge Royce Lamberth said he was "shocked" and "dumbfounded" when he learned that FBI had granted immunity to former Clinton chief of staff Cheryl Mills during its investigation into the use of Clinton's server, according to a court transcript of his remarks.

On four occasions, the FBI told the FISA court as part of its application to surveil former Trump aide Carter Page that the agency "did not believe" former British spy Christopher Steele was the direct source for a Yahoo News article implicating former Page in Russian collusion.

But London court documents later revealed that Steele -- who worked for a firm hired by the Clinton campaign and Democratic National Committee (DNC) -- was, in fact, the source for the Yahoo News article that the FBI suggested provided an independent basis to monitor Page. Page has not been charged with any wrongdoing despite the lengthy surveillance, and he is now suing the DNC for defamation.

"The FISA abuses and whether or not the world's premier law enforcement agencies should be relying -- even in a in a marijuana case -- on information that you have not vetted corroborated or contradicted" were among the "salient" issues, Gowdy said. "So what is the threshold for the reliability and credibility of the information?"

Rep. Trey Gowdy on his plans going into the hearing with James Comey.

He added that he wants to ask Comey on Friday whether the agency later tried to corroborate facts in its FISA application to surveil Page.

"The FBI had a criminal investigation into a presidential candidate, and then less than a month after that ended, they launched a counter-intelligence investigation into the campaign of the other major presidential candidate," Gowdy told Bream. "So that's a lot of power that we have given an entity -- it's not too much to ask for the former head of that entity to come explain to Congress the decisions made and not made during the relevant time period."

Trump fired Comey in May 2017, prompting Comey to leak memos documenting statements by the president in which he purportedly demanded Comey's loyalty and suggested Comey curtail the investigation into Flynn.

The leaked memos led to Mueller's appointment, and fueled Republicans' claims that Comey was unfit to lead the FBI.

The president made clear early Thursday that the pending developments were on his mind, characterizing Mueller's investigation as "Presidential Harassment" that is undermining his poll numbers.

For Manafort, the sentencing document requested by Obama-appointed U.S. District Judge Amy Jackson in Washington, D.C., could be electronically filed at any time on Friday. Mueller's team said in a court filing late last month that Manafort -- who avoided a trial in Jackson's courtroom in September by pleading guilty and vowing to cooperate with prosecutors -- had instead lied to the FBI and Justice Department "on a variety of subject matters."

Manafort's defense team, which has rejected prosecutors' claims that he violated the terms of the plea agreement, will have two weeks to respond to Mueller's filing on Friday. Jackson could schedule a hearing before she rules on whether to throw out Manafort's plea deal -- which could expose Manafort to further charges. Jackson has set a tentative sentencing date of Mar. 5.

Manafort was convicted on several bank and fraud charges in a separate Virginia federal case in August overseen by Judge T.S. Ellis III. A sentencing date of Feb. 8 has been set in that case.

Manafort could have yet more involvement in other ongoing federal probes. A separate investigation referred to DOJ prosecutors by Mueller earlier this year into possible criminal activity by Clinton-linked Washington insider Tony Podesta and former Obama White House Counsel Greg Craig is reportedly heating up, as prosecutors increasingly reach out to potential witnesses.

Podesta's firm previously did work for Manafort, raising the possibility that the ex-Trump campaign chairman will be involved in yet another potential prosecution. Podesta was offered so-called "use immunity" by Mueller this summer that would have compelled him to testify in Manafort's planned D.C. trial, which did not occur as scheduled because of Manafort's plea deal.

"Use immunity" is a limited form of immunity that only protects Podesta from prosecution based on his own statements on the witness stand. Even if Podesta ultimately provides testimony, he would still be open to potential prosecution based on materials that prosecutors might uncover independently from his testimony.

Meanwhile, U.S. District Court Judge William Pauley has imposed a 5 p.m. EST deadline for both Mueller and prosecutors in the Southern District of New York to hand-deliver separate sentencing submissions on Cohen, the former Trump attorney and right-hand man who has pleaded guilty in cases handled by both offices.

In the Mueller probe, Cohen pleaded guilty late last month to lying to Congress about a Trump real estate project in Russia. And in August, Cohen pleaded guilty in a separate case that Mueller referred to prosecutors in the Southern District of New York because it fell outside the scope of his congressional mandate to probe possible Russia collusion.

Rep. Biggs: We will learn more on Comey’s inconsistencies

Arizonan Republican Rep. Andy Biggs says former FBI director James Comey will be made to answer questions about leaks, inconsistencies in his testimony and the appointment of a special counsel. His testimony will be released within in 24 hours.

And after Cohen's plea last month, the president swiftly fired back, blasting Cohen as a "weak person," and claiming his former attorney was "lying" to get a reduced sentence. Cohen is set for sentencing the morning of Dec. 12.

Other potential former Trump associates and prominent conservatives seemingly remain in the crosshairs. At a speech at the American Priority Conference in Washington, D.C., GOP operative Roger Stone said he was "proud" to have Trump's public support as he vowed to never testify against the president.

Roger Stone: Mueller has examined every aspect of my life

"Few Americans, I think, could withstand the kind of legal proctological examination that I have been under for the last two and a half years," Stone said. "Mr. Mueller and his strike force have examined every aspect of my personal life. My family life. My social life. My business life. My political life. My sex life. FBI agents have been seen rummaging through my garbage. My cleaning lady was interviewed by the Federal Bureau of Investigation.

"Yet I ask this question," he added. "What does any of that have to do with Russia collusion?"

Stone this week invoked his Fifth Amendment right against self-incrimination in refusing to testify and produce documents before the Senate Judiciary Committee in a closed-door setting.

Raising an objection similar in some ways to Comey's concerns about offering testimony before the House Judiciary Committee, Stone said he wanted to avoid a "replay" of the situation in September 2017, when he testified privately before the House Intelligence Committee but remains unable to see a transcript of his own remarks.

"I will not testify unless I am allowed to testify in public so the American people can hear every word," Stone said to applause. He said the Russia probe is focused not on collusion, but on "perjury traps and trumped-up process crimes."

Late Thursday, Trump tweeted a comment on Fox Business Network by former Infowars editor Jerome Corsi, who has alleged that Mueller is attempting to bully him into providing false testimony in the Russia probe.

The president also again derided Mueller's team as "17 Angry Dems," referring to prosecutors in the Special Counsel's office who donated to Democratic candidates.