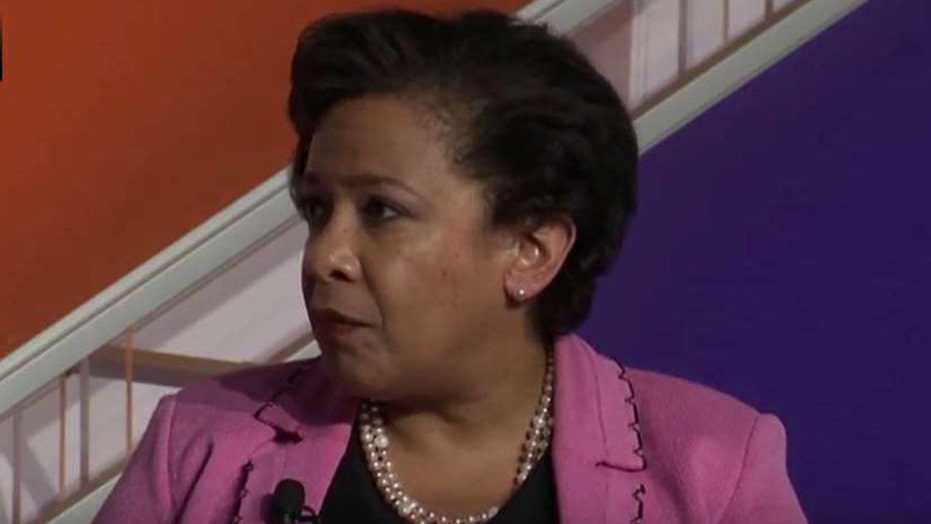 Attorney general will not recuse herself from the investigation

Attorney General Loretta Lynch said Friday she will fully accept the recommendations of an FBI-led investigation into whether to bring charges against Hillary Clinton and her use of a private email sever while she was secretary of state.

I don’t have a role in these findings,” Lynch said at a summit in Colorado. “They are acting independently.”

Lynch acknowledged an impromptu meeting with former President Bill Clinton earlier this week “cast a shadow” on public perception of the email investigation into his wife.

“I certainly won’t do it again,” Lynch said. “It has cast a shadow over this.”

Lynch’s comments highlight the intense scrutiny surrounding the probe into the past use of an exclusive email server by Clinton, the presumptive Democratic presidential nominee.

The move to defer action to the findings of career prosecutors and investigators comes amid an uproar over Lynch’s meeting this week with the former president.

The Justice Department had been planning on such a course for months, Lynch said, and her move did not have to do with growing criticism following reports that Lynch met with the former president on her government plane.

Although Lynch claims the two discussed golf and grandchildren, legal watchdogs have called the meeting highly improper and called for the Department of Justice’s Inspector General to investigate.

“No matter how I viewed it, I understand how other people view it,” she said, acknowledging the meeting raised eyebrows over the impartiality of the investigation into Hillary Clinton.

A law enforcement source close to the investigation tells Fox News the probe into Clinton's email practices is ongoing but that investigators are "very close" to reaching a determination.

The FBI is probing whether Clinton or her aides violated the law by setting up a private email server for her to conduct government business while serving as President Obama’s Secretary of State. More than 2,000 emails that passed through the server have been deemed top secret, which could represent a violation of the federal Espionage Act. In addition, as many as three foreign governments may have hacked the server, according to reports.

Earlier, Lynch defended the chat with the former president, who appointed her as U.S. Attorney for the Eastern District of New York, as a cordial meeting between old friends.

“He did come over and say hello, and speak to my husband and myself, and talk about his grandchildren and his travels and things like that,” Lynch said at a news conference in Los Angeles on Wednesday, where she was promoting community policing. “That was the extent of that. And no discussions were held into any cases or things like that.”

Critics were not convinced, and pointed out that rules governing Lynch’s conduct prohibit even creating the appearance of impropriety.

“In light of the apparent conflicts of interest, I have called repeatedly on Attorney General Lynch to appoint a special counsel to ensure the investigation is as far from politics as possible,” Sen.  John Cornyn, R-Texas, said.

It's certainly not the first time the ex-president's missteps, often on behalf of his wife, have attracted attention. In February, for instance, he compared supporters of Clinton opponent Sen. Bernie Sanders to GOP tea party activists and recently described the controversy over his wife's private email server as a "game."

Congressional Republicans seized on the meeting between the former president and the attorney general.

Rep. Steve Scalise of Louisiana, the third-ranking House Republican, said Lynch should recuse herself entirely from the case and appoint a special prosecutor. Lynch had said she would still be briefed on the investigation and review the results, but let the career officials make the call on whether a prosecution should go ahead.

"The notion that the prosecutor, the person who runs the Justice Department, would spend 30 minutes in a private conversation with the spouse of someone her department is investigating raises all sorts of red flags and even Democrats have admitted it," GOP Sen. Marco Rubio of Florida told Miami 610 WIOD Radio.

Lynch says the meeting was unplanned and happened while the former president was waiting to depart on another plane. She said he walked over and boarded her plane after she landed.

She said Clinton talked about his grandchildren and told her he had been playing golf in Arizona. She said they discussed former Attorney General Janet Reno, whom they both know.

"We basically said hello, and I congratulated him on his grandchildren as people tend to do," she said Friday. "It really was a social meeting," she added. "He spoke to me, he spoke to my husband."

Orlando, Florida, attorney John Morgan, a longtime Clinton fundraiser, said that's the Bill Clinton he knows. "If, in the plane next to his was me, he would come over and come up, because that is what he does," Morgan said. "It doesn't matter if it's Loretta Lynch or Loretta Lynn. He's coming over if he knows you."