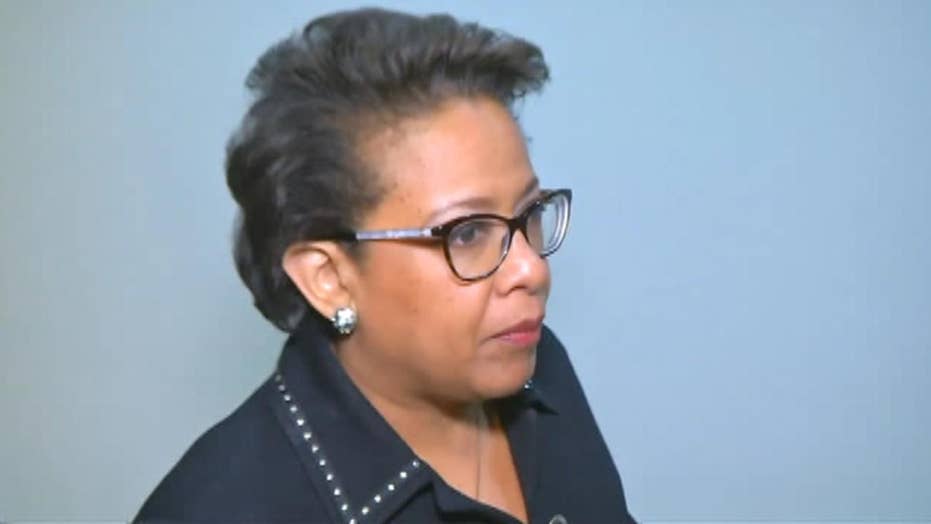 Chief intelligence correspondent Catherine Herridge tries to get answer on tarmac meeting from Lynch as she entered meeting.

Former Attorney General Loretta Lynch met with members of the House Intelligence Committee on Friday as part of the probe looking into Russian meddling in the 2016 presidential election.

Lynch is one of several former Obama officials who have been called to Congress for closed-door questioning over the Russia accusations.

But sources close to the investigation told Fox News that questions over her infamous tarmac meeting with President Bill Clinton also may have been on the agenda. That June 27, 2016 meeting with Clinton on an airport tarmac in Phoenix raised questions about whether Lynch – or the Justice Department – could be impartial in the Hillary Clinton email investigation.

The first was whether Lynch instructed Comey to call the Clinton email probe a “matter” versus an “investigation,” as he claims. Lynch also ignored questions on whether she sought permission from anyone in the White House before the tarmac meeting, and whether she could address any of the issues raised by Comey during his appearance before the Senate Intelligence Committee earlier this year.

In his closely watched Senate testimony that otherwise was devoted to discussing the circumstances of his firing by President Trump, Comey said the tarmac meeting was a "deciding factor" in his decision to act alone to update the public on the Clinton probe.

"Her meeting with President Clinton on that airplane was the capper for me, and I then said, you know what, the department cannot, by itself, credibly end this,” Comey told the committee.

"There were other things, significant items," Comey added, citing how "the attorney general directed me not to call it an investigation and call it a matter—which confused me."

The tarmac meeting has become a subject of scrutiny once again, as conservative watchdog group Judicial Watch confirmed the FBI has located 30 pages of documents related to the meeting.

The meeting also was referenced in a Senate Judiciary Committee hearing earlier this week, when Sen. Lindsey Graham, R-S.C., asked Attorney General Jeff Sessions if there was a phone call between Lynch and the White House on whether Lynch should have taken the meeting with former President Clinton.

Sessions responded to Graham by saying any inquiries on the matter should be made to the deputy attorney general.

Friday’s closed-door appearance also was a potential venue for questions on “unmasking.”

Samantha Power, Obama’s ambassador to the United Nations, recently told the House Intelligence Committee that other people made a rash of so-called unmasking requests in her name.

“Her testimony is they may be under my name, but I did not make those requests,” Rep. Trey Gowdy, a member of that committee, said of Power during an interview with Fox News on "Special Report with Bret Baier."

Power is among the Obama administration figures who made requests to identify Americans whose names surfaced in foreign intelligence reporting, known as unmasking.

Last month, Fox News reported that Power was unmasking at such a rapid pace in the final months of the Obama administration that she averaged more than one request for every working day in 2016 – and even sought information in the days leading up to Trump’s inauguration.