Capitol Hill Police form a line around protesters gathered in the atrium of the Hart Senate Office Building on Capitol Hill, Thursday, Oct. 4, 2018 in Washington.

An anti-Kavanaugh protester who brought her children to confront Sen. Bill Cassidy, R-La., this week on Capitol Hill ended up receiving a talking-to of her own from the senator.

"Senator Cassidy, can you please apologize to my children for ruining their futures?" the protester called out to Cassidy in a video uploaded to Facebook on Tuesday.

Her question was an apparent reference to the uncorroborated sexual misconduct allegations against now-Supreme Court Associate Justice Brett Kavanaugh. President Trump's pick for the nation's highest court was confirmed last week by a narrow 50-48 margin in the Senate, with Cassidy among the "yes" votes.

"Hey, guess what?" Cassidy immediately replied after removing his earphones and turning to two young children sitting in a hallway inside the Hart Senate Office Building, near the Capitol. "I know your parents are using you as tools. In the future, if somebody makes an allegation against you, and there's no proof for it, you'll be OK."

"What about black men, if you're going to use that analogy?" one protester nearby called out.

That protester, Triana Arnold James, told Fox News on Friday that she opposed the confirmation of Kavanaugh and advocates for women veterans suffering sexual trauma.

James said she felt Cassidy supported Kavanaugh purely for partisan reasons. "Republicans need to take a lesson from this and be more attentive, and apply the law, and represent all people, and not just Republicans," she said.

"Why is it that [Kavanaugh] gets the benefit of the doubt ... but black men get the presumption of guilt?"

Another demonstrator told Cassidy on Tuesday that women are entitled to "a full due process."

"Shame on you, for not believing women and for ruining my daughters' lives," Shaprio said as Cassidy headed to a nearby elevator. (A demonstrator incorrectly suggested he was going to a restroom).

The Daily Caller identified the anti-Kavanaugh protester who brought her children as Alethea Torrellas Shapiro. In Twitter and Facebook posts over the past several weeks, Shapiro documented her efforts to protest Kavanaugh's confirmation to the Supreme Court.

"I'm at the back of scotus [sic] waiting for Kavanaugh with my kids and a bunch of other protesters does anyone know if he's inside yet?" Shaprio wrote on Twitter on Tuesday. She deleted the post Friday night, after this article was published.

"Being in Collins office for that long hour was like watching the most torturous depressing rose ceremony ever," she wrote on Monday, referring to a lengthy speech on the Senate floor by U.S. Sen. Susan Collins, R-Maine, justifying her vote to confirm Kavanaugh.

In a Facebook post on Monday, Shapiro described her intention to bring her children to "birddog" in the Senate hallways and basement to protest the "horrible atrocious men" there.

The confrontation wasn't Cassidy's first run-in with anti-Kavanaugh protesters. Earlier this month, Cassidy was videotaped asking a protester if she would like the life of her husband or son destroyed by an "uncorroborated" charge.

While once-pervasive anti-Kavanaugh demonstrations at the Capitol and other sites have subsided in the days since the new justice's confirmation, as senators return home to their constituents until after the mid-term elections, top Republicans say so-called leftist "mob tactics" will become a hallmark of this election cycle.

Liberal protesters – egged on by Democratic politicians – have openly embraced a more confrontational and aggressive approach, banging on the doors of the Supreme Court, confronting lawmakers outside their offices and chasing GOP officials and their wives out of restaurants.

This week, former presidential candidate Hillary Clinton said it's not possible to be civil with Republicans any longer, and former Attorney General Eric Holder said it's time to "kick" Republicans. He later clarified he was speaking metaphorically.

“We saw the lack of civility and the angry mobs even before the comments from Hillary Clinton and Eric Holder, so we fully expect leftwing activists will continue to harass members of Congress up through Election Day," a senior Republican aide told Fox News on Friday. 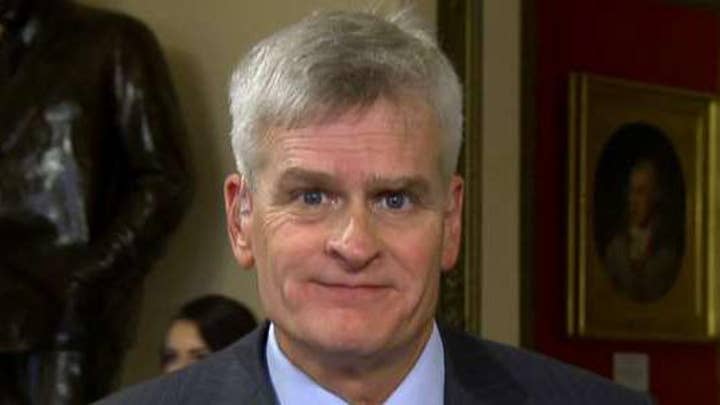 WATCH: RAND PAUL WARNS OF DANGER IN D.C.: 'I FEAR SOMEBODY'S GOING TO BE ASSASSINATED'

"The radical Democrats have turned into an angry mob," President Trump said at one of many recent campaign-style rallies. The Republican National Committee released a video Thursday calling the left “an unhinged mob,” showing recent comments from Democrats encouraging protests.

"There is going to be an assassination if this doesn't ratchet down," Sen. Rand Paul, R-Ky., told "Fox & Friends" this week. Paul was one of the senators on the baseball field when a leftist gunman opened fire last year, nearly killing House Majority Whip Steve Scalise, R-La., and wounding two others.

"The other side needs to really calm the rhetoric down," he said.