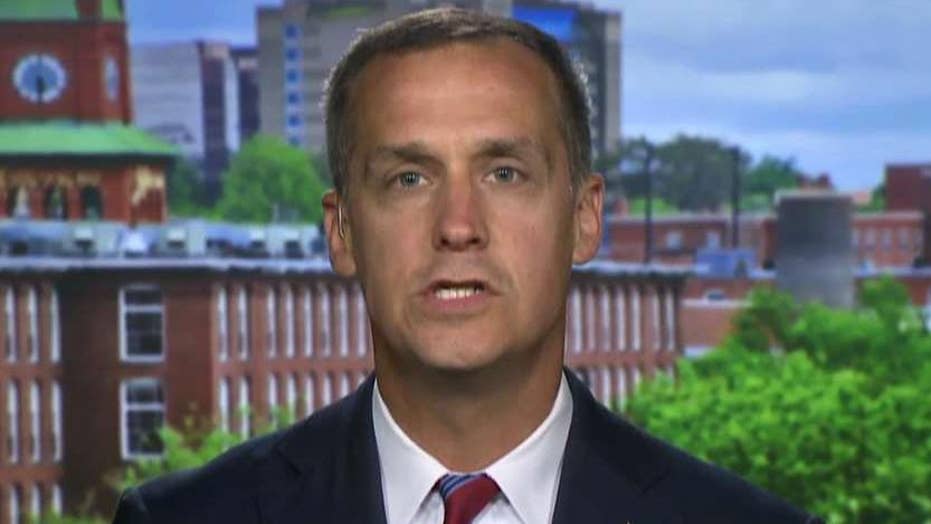 WINDHAM, N.H. – Corey Lewandowski says if he runs for the Senate in his home state of New Hampshire, his ability to fundraise thanks to his close relationship with President Trump would make him the most formidable Republican to face off next year against Democratic Sen. Jeanne Shaheen.

“If I decide to get into this race, I think you’ll see my fundraising prowess come to fruition very quickly,” Lewandowski argued in a sit-down interview this week with Fox News.

The ability to raise large sums of campaign cash would come in handy against Shaheen, who is already building up a formidable war chest as she runs for re-election in 2020.

LEWANDOWSKI GENERATES BUZZ AS HE MULLS SENATE RUN IN NH

Lewandowski – who managed Trump’s White House campaign from its start in 2015 through the 2016 primaries and who remains a close outside adviser to the president – generated plenty of buzz last week when he said he was seriously considering a 2020 run for the Senate in New Hampshire.

Asked if a Senate run was his idea or if Trump nudged him, Lewandowski declined to comment on his private conversations with the president.

But he stressed “that if I were to run, I don’t think somebody else could be the Trump guy in New Hampshire.”

And with the president’s approval rating sky-high among Republicans in the Granite State and across the country, his close ties to Trump would obviously be a major factor in a GOP primary that already has two declared candidates in the race.

If Lewandowski does run, he expressed hope that he would clear the primary field.

“What I would prefer,” he explained, “is to have one unified candidate who has the opportunity to run a longer campaign to focus directly on the general election….For the good of goal of defeating Jeanne Shaheen, of course, we’d want to have some cohesiveness and support among one candidate.”

Both of the Republican candidates in the race – former state House of Representatives Speaker Bill O’Brien and retired Army brigadier general Don Bolduc – say they have no intentions of dropping out of the race if Lewandowski declares his candidacy.

Lewandowski’s message: “Both of them need to decide what’s best for them and their ability to raise money to generate support within the state to hone their message of why they should be the best candidate if they decide to stay in the U.S. Senate. They can’t run as the Trump campaign person. They can’t run as somebody who supported Donald Trump three years ago because neither of them did that.”

He emphasized “I will run as the Trump candidate….I think in a Republican primary that’s a very difficult thing to beat if I choose to get in.”

Lewandowski said he would ask for Bolduc and O’Brien to support him if runs. And he predicted, “I don’t know if either of those two candidates, if I get in the race, stay in the race.”

While Lewandowski could be tough to beat if he runs for the GOP nomination, the general election’s a different story.

Shaheen, a former governor who’s running for a third six-year term in the Senate, remains popular among Democrats and independent or undeclared voters – who make up around 40 percent of New Hampshire’s electorate.

While Trump came extremely close to winning the state’s four electoral votes in the 2016 election – he lost to Democratic nominee Hillary Clinton by less than 3,000 votes – his poll numbers in the Granite State remain underwater.

And Lewandowski, like Trump, is known as a very controversial and polarizing figure.

Asked how he could win over moderate voters who will likely determine the outcome, Lewandowski said, “look, I’m unapologetic about my beliefs.”

“I think the people of New Hampshire want someone who stands up and believes in what they say, fights for their values, and look, people in New Hampshire know I’m a fighter," he said. "There’s no question about that. I fight for what I believe in.”

Lewandowski was interviewed at his lakeside home in Windham, an affluent community in southern New Hampshire. He grew up in a working-class family in nearby Lowell, Massachusetts, but has profited in recent years thanks to his success as a political operative and commentator for cable news networks and through his lobbying firms.

Before the interview began Lewandowski and this reporter watched the president’s nationally televised address on Monday in the wake of the mass shootings last weekend in El Paso, Texas and Dayton, Ohio.

Saying “I have been the biggest advocate of the Second Amendment,” the potential candidate emphasized that “we have to make sure we’re doing a better job on background checks, we have to diagnose mental health issues and we have to do a better job on tracking social media.”

New Hampshire is viewed as a key battleground state and saw competitive Senate races in both the 2014 and 2016 cycles. Republicans see Shaheen's seat as a potential pick-up as they play defense elsewhere in 2020 as they seek to hold their 53-47 majority in the chamber.

Lewandowski argued that “the people of New Hampshire have been ill-served by Jeanne Shaheen for the last 12 years.”

And he pledged that if he were to win the seat, “it would probably be a one-term or two terms maximum…I believe in term limits for senators and congressmen.”