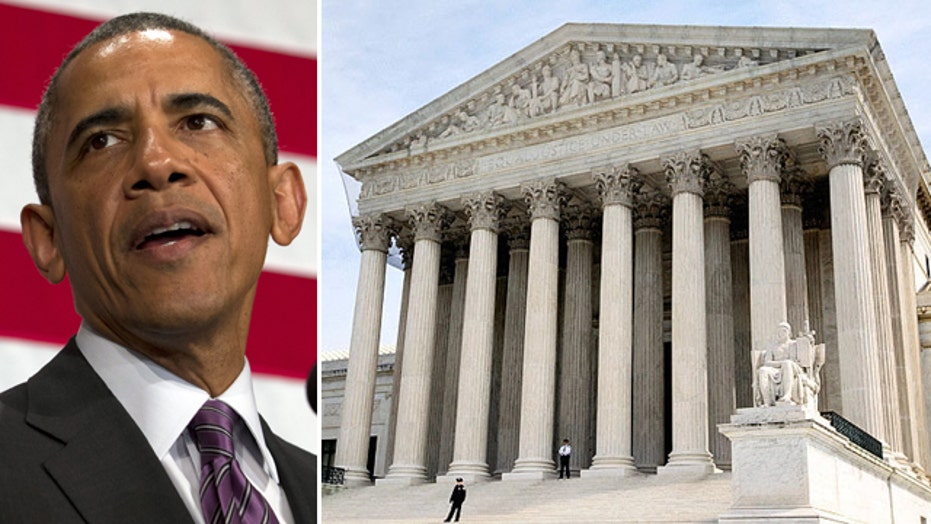 The Supreme Court ruling on Thursday that invalidated three appointments made by President Obama to the National Labor Relations Board has thrown hundreds of the board's decisions into question.

The board that rules on labor disputes is now scrambling to determine the impact of the high court decision. At issue is whether board decisions made when the now-invalid appointees were participating will have to be re-decided under the current NLRB.

By one count, more than 430 cases could be in doubt, including a decision to protect workers from being fired for complaining about their companies on social media sites.

Board Chairman Mark Gaston Pearce put out a brief statement on Thursday acknowledging the possibility these cases will have to be revisited.

"We are analyzing the impact that the Court's decision has on Board cases in which the January 2012 recess appointees participated," he said. "The Agency is committed to resolving any cases affected by today's decision as expeditiously as possible."

He noted that the board, as it's now constituted, has five Senate-confirmed members. But that was not the case between January 2012 and mid-2013, when the board contained members whom the Supreme Court has determined were improperly appointed.

In a blow to Obama, the court unanimously ruled Thursday that the president exceeded his authority when he made the temporary appointments to the board during a brief Senate break.

The National Right to Work Legal Defense Foundation claims the ruling means "all decisions, published and unpublished, absent settlement during the interim, must be reconsidered."

Sen. Tim Scott, R-S.C., told Fox News that he hopes every case decided during that period will come back before the NLRB for another hearing.

"I think we need to hear each and every case and understand the merits," Scott said.

Scott acknowledged that even if the cases are heard again, the results could be the same given the partisan makeup. "My fear is that you will see the new board rubber-stamping, perhaps in totality, all of these decisions and that would be bad," he said.

But the Supreme Court decision nevertheless threatens to sideline the NLRB's current work so that it can revisit the past cases.

According to The Wall Street Journal, 436 cases were decided during the 18-month period when two of the three appointees in question were there. The third served only a short stint before stepping down.

Many of them may not be controversial, but the Journal reported that 100 of those decisions were challenged in federal court -- meaning the board could be pressed to at least revisit those cases.

Among the 436 cases was a decision protecting workers from being fired for complaining about their jobs on social media; decisions that struck down employer policies barring workers from discussing private matters involving other employees or discussing their own internal investigations; and a decision telling employers to give unions a chance to bargain before imposing certain disciplinary actions.

AFL-CIO President Richard Trumka, in a written statement, looked for the silver lining in Thursday's ruling, saying it "clears up the legal landscape on a question both Democratic and Republican presidents have faced for decades -- the circumstances under which the United States Constitution allows them to make temporary recess appointments to executive branch positions."

As for the NLRB's past decisions, he said, "We are confident the NLRB will handle the pending cases impacted by [the ruling] efficiently and expeditiously."