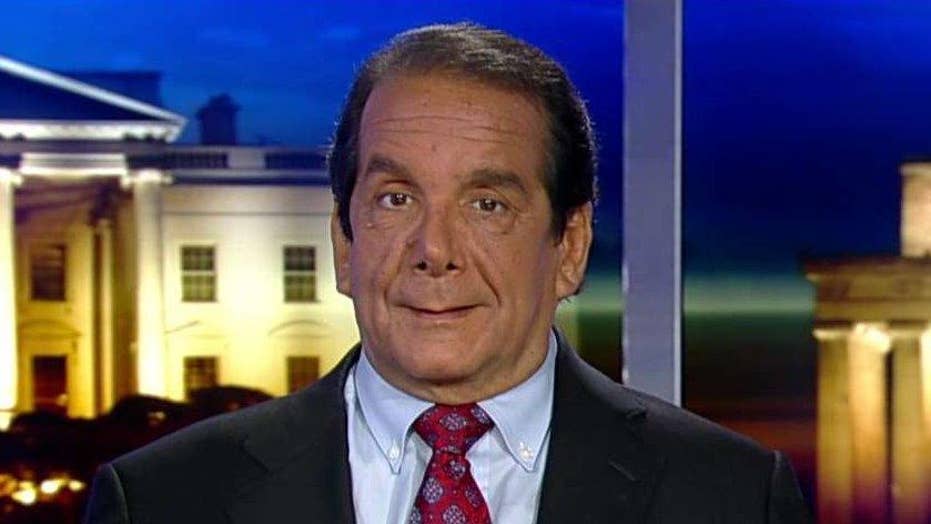 Conservative commentator Charles Krauthammer labeled President Donald Trump’s rally in West Virginia on Thursday night a “very important demonstration” by the president to reaffirm that his base still had his back.

“Here’s a guy whose numbers are down in the 30s,” Krauthammer said on “Tucker Carlson Tonight.” “He’s got this grand jury, reports of a grand jury being convened, he’s got the walls kind of closing in on him in Washington. And here he’s going out into the country and saying ‘These are my people. These are real people. Forget about the numbers. Forget about the chatter in Washington. Forget about the stories about Russia – which he spent a lot of time on - but I represent a huge constituency of tremendous support and enthusiasm.’”

Special Counsel Robert Mueller impaneled a grand jury in Washington as part of an investigation into potential coordination between the Trump campaign and Russia, The Wall Street Journal reported on Thursday.

Krauthammer said that Trump wasn’t “very specific on policy” but was able to appeal to those in attendance at his rally anyway. “He said, ‘I’m bringing you guys back. I’m the only one who listened. You were abandoned,’” Krauthammer said. “That’s his appeal. That’s how he won the election and he’s reminding the elites that that appeal is still there.”

That attraction, the commentator said, could prove to be consequential if Democrats continue to aim to bring the president down.

“I think we’re really headed into very choppy and dangerous constitutional waters,” Krauthammer said. “We know what the Democrats want to do. They want to get control of the House and on day one they’re going to start impeachment. Now I happen to think, as you know, I opposed the Trump candidacy. I don’t think he’s very well fit for the presidency. But fitness is not a reason for impeachment and removal. High crimes are. Here, we have a prosecutor looking for high crimes. With Watergate you started with a crime and then you try to find out how it happened. Here, they’re looking for a crime. Perhaps they’ll find one, I don’t know. As of yet I haven’t heard of one. Collusion is unseemly but it ain't a crime.”

“So, you’ve got a political establishment, mostly Democratic but there are some Republicans, who would like to see him taken out of office,” Krauthammer continued. “I think that would be a catastrophic mistake. It would cause a rupture in the country where people would say ‘When we people, the ones who’ve been abandoned, elect somebody we like, our guy gets taken out? I thought we had a stable democracy.’”

“Again, I think he’s unfit but that’s not the grounds for removal,” Krauthammer stated. “What it means is, if you think a man is unfit, you vote against him. But you don’t remove him from office and that’s where I’m afraid we are headed given the forces that are surrounding the president. I just hope that cooler heads prevail. There will be another election – there always are – people can make their choices.

“I think this appearance that he did in West Virginia tonight is a way of saying my numbers may be down but I command a formidable army.”