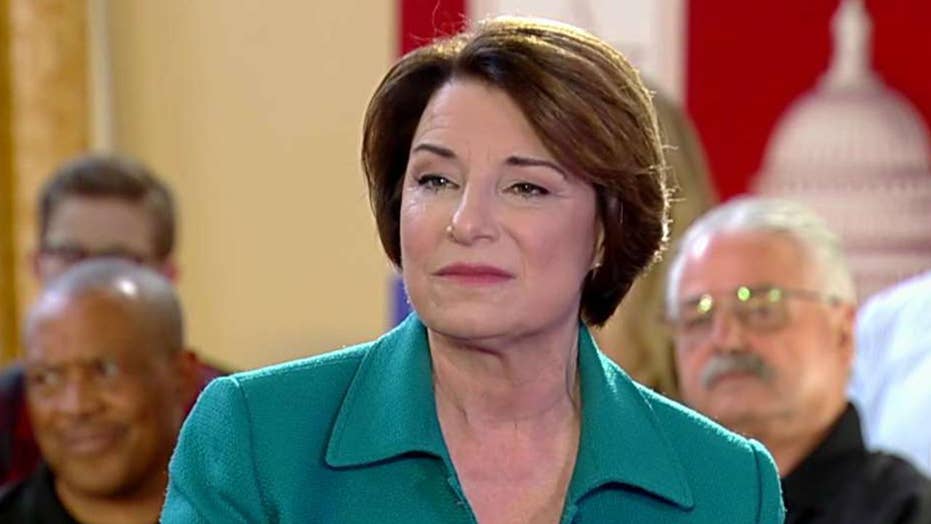 Sen. Amy Klobuchar, D-Minn., defended both former Vice President Joe Biden and Sen. Kamala Harris, D-Calif., in their war of words over the former’s comments about working with segregationist lawmakers in the past.

Klobuchar, who launched her bid for the White House earlier this year, refused on Sunday to take sides in the battle between two other Democratic presidential hopefuls that spilled onto the debate stage two weeks ago.

“I think fair to say if you are dealing with segregationist like he was, you have to call him out,” Klobuchar said of Biden during an appearance on NBC News’ “Meet the Press.” “He has apologized for not doing that at the time, but I want to move our country forward.”

Biden apologized on Saturday over the pain he caused people with comments he made about his ability to work with segregationist senators.

"I regret it and I'm sorry for any of the pain or misconception they may have caused anybody," Biden said during a campaign event in South Carolina. Biden said that he was "wrong" to "give the impression" that he was somehow praising segregationist senators.

His apology came after Harris highlighted race during the first round of Democratic primary debates -- pointing to his comments about segregationist senators and his position on federally mandated busing.

After that debate, polling showed Biden's lead narrowing among Democratic contenders while Harris saw a dramatic rise in support.

During her interview on Sunday, Klobuchar also defended her stance as the Democratic Party’s main moderate in the 2020 presidential race – a fact that she has continued to highlight despite some criticism from her more liberal colleagues and a shift in the party to the Left.

“I tell them I look people in the eye and I tell them the truth,” she said of her critics. “A lot of people making promises. I am not going to make promises to get elected.”

Klobuchar, who launched her campaign in February, has stumped on her ability to work across the aisle with Republican colleagues and her ability to get legislation passed, but her campaign has run into some speedbumps – most notably accusations of harsh treatment to former staffers – and polling consistently puts her drawing just 1 percent of the vote.