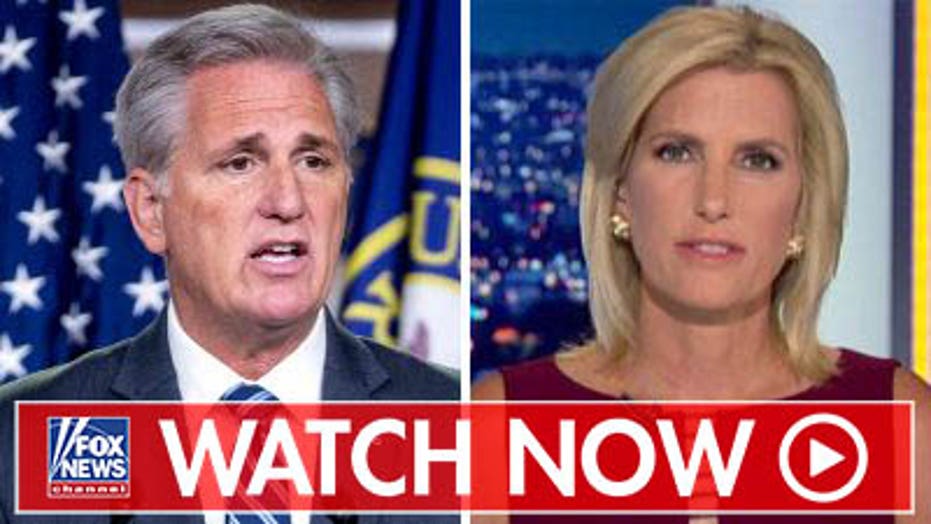 Kevin McCarthy on the state of the Democratic Party

Kevin McCarthy on the state of the Democratic Party

The clash also shows the left wing of the party is becoming more prevalent, McCarthy claimed Thursday on Fox News' "The Ingraham Angle."

"This is internal war. This isn't a family feud, this is beyond what anyone thinks," he said.

"They're challenging these Democrats in primaries," he said of the progressives' actions against moderates in the party.

"The socialist Democrats are taking over. Not only are they taking over the party, they're going to take on any Democrat in that process as well."

Referring to Ocasio-Cortez, McCarthy said the Democrat -- whose district includes parts of the Bronx and Queens in New York City -- is a strong voice in the party, but only until another party member stands up to her.

"She'll fight until you fight back," he said. "Then, she wants to play a race card or something."

Ocasio-Cortez's disagreement with caucus leadership led to a rebuke from a longtime House member from St. Louis.

Rep. William Lacy Clay, D-Mo., added to the mounting Democratic criticism of Ocasio-Cortez, slamming her "inappropriate" suggestion that Pelosi is singling out the New Yorker and her "squad" of fellow freshman because of their race.

"It was such a weak argument to say she was being picked on and that four women of color were being picked on by the speaker," he said. "It tells you the level of ignorance to American history on their part as to what we are as the Democratic Caucus.

"It is so inappropriate. So uncalled for. It does not do anything to help with unity. It was unfair to Speaker Pelosi."

Clay continued his broadside, saying the comment exposed how much Ocasio-Cortez and Reps. Ilhan Omar, D-Minn.; Rashida Tlaib, D-Mich.; and Ayanna Pressley, D-Mass., have to learn when it comes to being "effective legislators."

"It’s going to take a process of maturing for those freshman members," Clay said. "They will have to learn to be effective legislators."