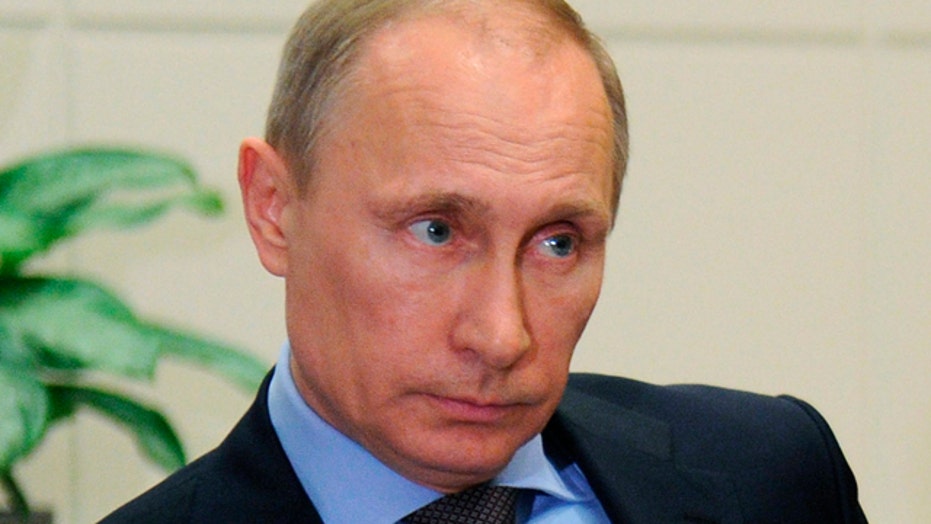 Secretary of State John Kerry and his Russian counterpart were unable to reach an agreement Friday to resolve the Ukraine crisis ahead of this weekend's referendum in Crimea, with rhetoric from Russia heightening concerns about Vladimir Putin's potential play for the disputed peninsula.

The strategic region is set to vote Sunday on whether to join Russia, a decision that could further escalate the stand-off and open the door for Moscow to formally annex Crimea. Kerry, calling that referendum "illegal," met with Russian Foreign Minister Sergei Lavrov for five hours in London on Friday in an attempt to "de-escalate" the stand-off.

Kerry, speaking with reporters afterward, said he came in "good faith with constructive ideas" to address the concerns of both Ukraine and Russia. But he said Putin is not backing down.

"I presented a number of ideas on behalf of the president which we believe absolutely could provide a path forward for all the parties," Kerry said. "However, after much discussion the foreign minister made it clear that President Putin is not prepared to make any decision regarding Ukraine until after the referendum on Sunday."

As the Obama administration has made clear before, Kerry said the U.S. won't recognize the results of the referendum and warned "there will be some sanctions" if it goes forward. Further, he said, "there will be consequences if Russia does not find a way to change course."

But Lavrov, speaking separately after the meeting, reiterated that Russia will "respect the will of the Crimean people." In a provocative statement, Lavrov also argued that the peninsula is more important to Russia than the Falklands are to Britain -- Britain went to war over the Falklands in 1982 to prevent them from falling under Argentine control.

It is unclear what Moscow will do if Crimea votes to join Russia. Kerry said a day earlier that if Russia does not back down, it will face "very serious" consequences by Monday.

The White House announced Friday that Vice President Joe Biden will travel Monday to Poland and Lithuania. The trip is part of the effort to pressure Russia against any further military intervention in Crimea.

The U.S. message was also echoed during a meeting of the U.N. Security Council. U.S. Ambassador to the U.N. Samantha Power decried the looming referendum as potentially "destabilizing."

"Sunday's referendum in Crimea is hastily planned, unjustified and divisive," she said.

Ukraine Prime Minister Arseniy Yatsenyuk, in New York, declared at the U.N. meeting that Crimea will remain a part of Ukraine.

Russia's U.N. ambassador, though, has remained defiant, blasting those who dispute the legitimacy of Sunday's vote.

"What is unacceptable is manipulating individual principles of international law," Vitaly Churkin said, arguing that the Crimea referendum is a matter of "self-determination."

Asking a question that many nations have also asked of Russia, he said: "Why such blatant interference in the domestic affairs of a state?"