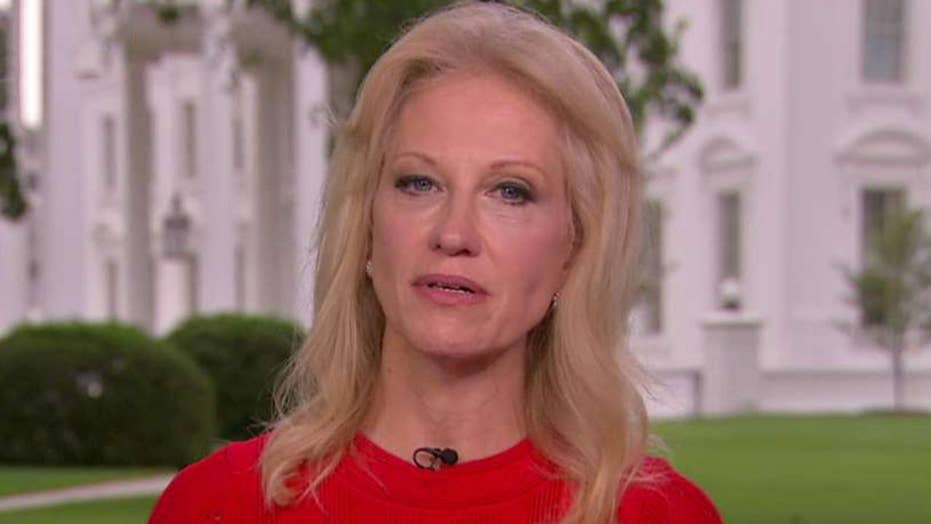 Conway: People are bending to the will of President Trump

The senior counselor to the president talks diplomacy with North Korea and taking on 'bad' trade deals.

"I certainly don't want anyone to use these kids as leverage," Conway said on NBC's "Meet the Press."

"I'd like to know who that is, by the way," she added, referring to the leaker, who spoke to The Washington Post. "I want that person to say it to my face, I really do. I'll meet them at the White House today, because I think that is a disgrace."

Conway added that, "As a mother, as a Catholic ... nobody likes this policy" of separating illegal immigrant children from their parents at the border.

"It’s zero tolerance. I don't think you have to justify it."

DEMS GAIN ENTRY TO IMMIGRATION CENTER AFTER ARGUING WITH COPS, BANGING ON DOOR

By law, children are generally separated from an accompanying adult upon crossing the border only if officials cannot determine their relationship with the adult, if the child is in danger, or if the adult is charged with a crime.

President Trump's administration has implemented what it calls a "zero-tolerance" policy for crimes at the border, leading to a spike in prosecutions that had resulted in more separations.

But Trump and his advisers have repeatedly expressed their regret that children are sometimes sent to separate detention facilities, and the president has called on Congress to solve the issue with legislation.

"The president has told folks that in lieu of the laws being fixed, he wants to use the enforcement mechanisms that we have,” the leaker, identified only an anonymous administration official, told The Washington Post last week. “The thinking in the building is to force people to the table.”

But also on Sunday, former top White House strategist Steve Bannon told ABC's "This Week" that the administration doesn't need to justify separating children from their parents at the border.

"It’s zero tolerance. I don't think you have to justify it,” he said, in a notable contrast to Conway's messaging.

He added that the administration had an electoral mandate to enforce the law unapologetically.

"We ran on a policy -- very simply -- stop mass illegal immigration and limit legal immigration, get our sovereignty back to help our workers, and so he went to a zero tolerance policy," Bannon said. "It's a crime to come across illegally and children get separated. I mean, I hate to say it, that's the law and he's enforcing the law.”