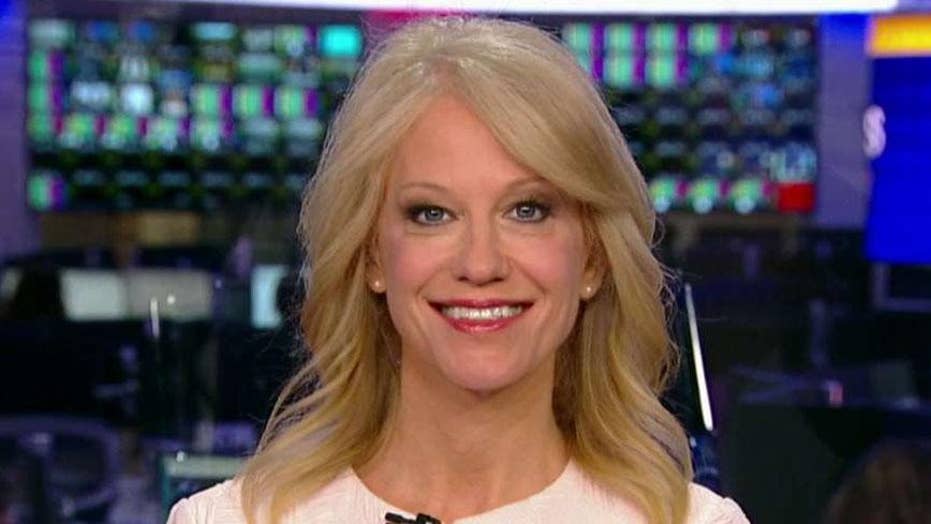 White House adviser Kellyanne Conway told "Fox News Sunday" that Adam Schiff, the top Democrat on the House Intelligence Committee who spent months claiming to have evidence of Trump-Russia collusion, is "completely compromised" and must step aside.

In the wide-ranging interview, Conway also charged that her husband George Conway, who has publicly exchanged highly personal insults with the president, used to be a big Trump fan -- and even "cried in his MAGA hat" on Election Night.

Trump has called George Conway a "husband from hell" and a "stone cold loser," following Conway's repeated attacks on the president's personality and mental health.

Schiff, for his part, has vowed to press on with more investigations of the White House despite Special Counsel Robert Mueller's long-awaited report finding no such collusion. But the California Democrat repeatedly and improperly used his position for political purposes, Conway told anchor Chris Wallace, and has lost the objectivity needed for the job.

"They used the taxpayer dollars and people’s anxiety, got into their lives. By the way, Adam Schiff is completely compromised," Conway said. "You want to find one person who is compromised? He’s the head of the House Intelligence Committee, and he spent more time on TV than at that committee over the last however many years."

In this Thursday, Jan. 19, 2017 photo, President-elect Donald Trump adviser Kellyanne Conway, center, accompanied by her husband, George, speaks with members of the media as they arrive for a dinner at Union Station in Washington, the day before Trump's inauguration. (AP Photo/Matt Rourke)

“The next thing that’s going to happen, is the different intelligence entities are going to say, ‘You know what, Chairman Schiff, if you don’t believe the information we provide to you … and you continue to leak like a screen door on a submarine, we’re going to quit giving you information,'” Gowdy said.

At an explosive rally in Michigan on Thursday, Trump mocked Schiff as having the "smallest, thinnest neck I've ever seen," and someone who is "not a long-ball hitter."

Every Republican on the House Intelligence Committee on Thursday demanded Schiff step down as chairman. In a letter, obtained by Fox News and signed by each Republican on the committee, the lawmakers slammed Schiff for his claims in the media that there was “more than circumstantial evidence” of collusion between the Trump campaign and Russia. They repeated their demand in person during a feisty hearing Thursday morning.

"And all nine Republican members [on the panel] have asked for his resignation," Conway continued. "I certainly did it a week ago and the president has done it. He cannot be fair -- that is one of the most important positions in the United States House… And he needs to step down."

Separately, Conway said President Trump's repeated threats to close the southern border with Mexico were serious. On Saturday, Trump made good on his threat to cut aid to three Central American countries he said haven't done enough to curb advancing caravans making their way to the United States.

"It certainly isn’t a bluff; you can take the president seriously, and here’s why," Conway said. "What he’s looking at is that [there were] 4,000 migrants apprehended in one day recently. We’re on track this month for close to 100,000. We have never seen a surge like this."

"By the way, Adam Schiff is completely compromised."

Conway also slammed Democrats' health care proposals, telling Wallace, "If the Democrats actually liked ObamaCare, they’d all be running on ObamaCare. Instead they’re running on "Medicare-for-All," which is the health care version of the Green New Deal, which got exactly zero votes in the Senate this week."

And, responding to her husband George Conway's recent public spat with her boss, Conway declined to answer whether she felt her husband was bullying her to get her to quit. Conway told Wallace that the "first line of protection in this world is and will always be my four children. So I don’t really like to discuss this publicly."

Still, Conway went on: "What I will tell you is that George was very supportive of President Trump, cried on election night in his MAGA hat blocks away from here at the Hilton in New York, wanted to take a job in the Trump administration and changed his mind, and was a guest of the President and First Lady months after he withdrew himself from consideration at the White House.

"And when he withdrew his name, he said that he would still support the President and his agenda, and quote, 'his wonderful wife’s work.' So if that’s changed, I haven’t changed," Conway continued. "So if that’s changed, I haven’t changed, but I will tell you that it’s unusual for Washington too, because I think that many women tend to get their power and their position through the men in their lives, and this is a little bit different, and I’m sure the feminists are going to throw me a parade at some point."