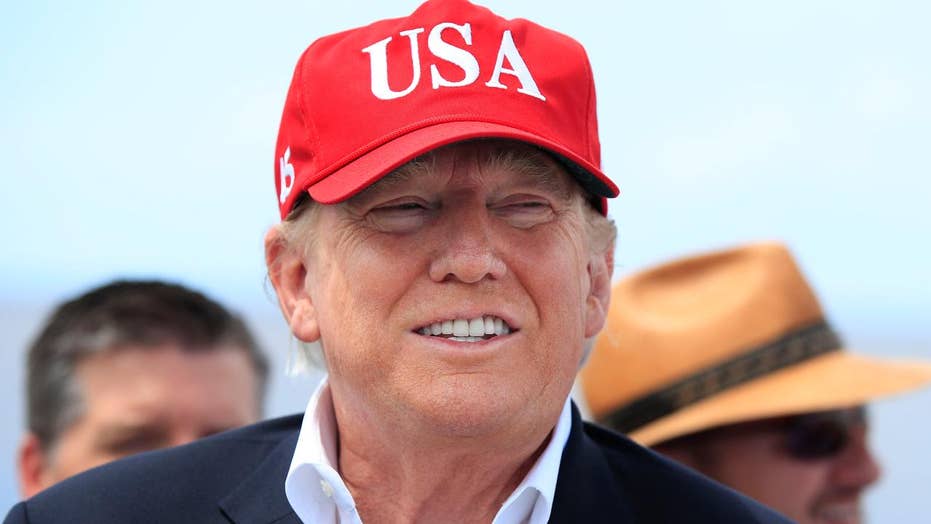 Making good on a longstanding threat, President Trump moved this weekend to cut direct aid to El Salvador, Guatemala and Honduras, whose citizens are fleeing north and overwhelming U.S. resources -- including as part of organized caravans that the White House has warned may eventually lead to the closure of the entire southern border with Mexico.

The dramatic step comes just days after Mexican Interior Secretary Olga Sanchez Cordero warned ominously that "the mother of all caravans" could be coming soon from the three nations.

"We have information that a new caravan is forming in Honduras, that they're calling 'the mother of all caravans,' and they are thinking it could have more than 20,000 people," Sanchez Cordero said Wednesday. A much smaller group of approximately 40 migrants left over the weekend, and a separate caravan of nearly 2,500 is currently making its way through Mexico.

And former Homeland Security Secretary Jeh Johnson acknowledged Saturday that America has a “crisis” at the southern border, and that the number of apprehensions exceed anything he encountered during his time serving under former President Barack Obama.

Last December, the U.S. pledged more than $10B in aid to Central America and Mexico to help keep migrants put. Later that month, Trump tweeted: "..Honduras, Guatemala and El Salvador are doing nothing for the United States but taking our money. Word is that a new Caravan is forming in Honduras and they are doing nothing about it. We will be cutting off all aid to these 3 countries -- taking advantage of U.S. for years!"

On Saturday, the State Department put those words into action, and notified Congress that it would look to suspend 2017 and 2018 payments to the trio of nations, which have been home to some of the migrant caravans that have marched through Mexico to the U.S. border.

In tweets posted Saturday, Trump blamed Democrats and Mexico for problems at the border and beyond, saying progressives are concerned only with changing domestic demographics to ensure more liberal voters.

"It would be so easy to fix our weak and very stupid Democrat inspired immigration laws," Trump tweeted Saturday. "In less than one hour, and then a vote, the problem would be solved. But the Dems don't care about the crime, they don't want any victory for Trump and the Republicans, even if good for USA!'

As far as Mexico's role, he tweeted: "Mexico must use its very strong immigration laws to stop the many thousands of people trying to get into the USA. Our detention areas are maxed out & we will take no more illegals. Next step is to close the Border! This will also help us with stopping the Drug flow from Mexico!"

The move comes as Trump, newly vindicated after the conclusion of Special Counsel Robert Mueller's Russia collusion probe, vowed to secure the borders and halt incoming caravans during a fiery rally earlier in the week.

When reporters asked Trump on Friday what closing the border could entail, he said "it could mean all trade" with Mexico and added, "We will close it for a long time."

Trump has been promising for more than two years to build a long, impenetrable wall along the border to stop illegal immigration, though Congress has been reluctant to provide the money he needs. In the meantime, he has repeatedly threatened to close the border, but this time, with a new group of migrants heading north, he gave a definite timetable and suggested a visit to the border within the next two weeks.

A substantial closure could have an especially heavy impact on cross-border communities from San Diego to South Texas, as well as supermarkets that sell Mexican produce, factories that rely on imported parts, and other businesses across the U.S.

The U.S. and Mexico trade about $1.7 billion in goods daily, according to the U.S. Chamber of Commerce, which said closing the border would be "an unmitigated economic debacle" that would threaten 5 million American jobs.

New Jersey Democrat Sen. Bob Menendez, the ranking member of the Senate Foreign Relations Committee, spoke out Saturday against cutting off aid to Central America, declaring that "foreign assistance is not charity; it advances our strategic interests and funds initiatives that protect American citizens."

And a group of House Democrats visiting El Salvador denounced the administration's decision to cut aid to the region.

"As we visit El Salvador evaluating the importance of U.S. assistance to Central America to address the root causes of family and child migration, we are extremely disappointed to learn that President Trump intends to cut off aid to the region," said the statement from five lawmakers, including Rep. Eliot L. Engel of New York, who chairs the House Foreign Affairs Committee. "The President's approach is entirely counterproductive."

Central American migrants, part of the caravan hoping to reach the U.S. border, take a break in Acacoyagua, Chiapas State, Mexico, Thursday, March 28, 2019. A caravan of about 2,500 Central Americans and Cubans is currently making its way through Mexico's southern state of Chiapas. (AP Photo/Isabel Mateos)

The Trump administration has threatened before to scale back or cut off U.S. assistance to Central America. Congress has not approved most of those proposed cuts, however, and a report this year by the Congressional Research Service said any change in that funding would depend on what Congress does.

MEXICO WARNS OF IMPENDING 'MOTHER OF ALL CARAVANS'

Short of a widespread border shutdown, Homeland Security Secretary Kirstjen Nielsen said the U.S. might close designated ports of entry to re-deploy staff to help process parents and children. Ports of entry are official crossing points that are used by residents and commercial vehicles.

Many people who cross the border illegally ultimately request asylum under U.S. law, which does not require asylum seekers to enter at an official crossing. Most people who make asylum claims are eventually rejected, because asylum applicants must show a specific and credible fear of persecution -- it is not enough to merely claim that conditions back home are economically dire.

Border officials are also reportedly planning to more than quadruple the number of asylum seekers sent back over the border to wait out their immigration cases, from 60 to nearly 250.

"We want to have a good relationship with the government of the United States," Lopez Obrador said. He added: "We are going to continue helping so that the migratory flow, those who pass through our country, do so according to the law, in an orderly way."

Marcelo Ebrard, Mexico's foreign relations secretary, tweeted that his country "doesn't act based on threats" and is "the best neighbor" the U.S. could have.

Alejandra Mier y Teran, executive director of the Otay Mesa Chamber of Commerce in San Diego, said the mere threat of border closures sends the wrong message to businesses in Mexico and may eventually scare companies into turning to Asia for their supply chains.

"I think the impact would be absolutely devastating on so many fronts," said Mier y Teran, whose members rely on the Otay Mesa crossing to bring televisions, medical devices and a wide range of products to the U.S. "In terms of a long-term effect, it's basically shooting yourself in your foot. It's sending out a message to other countries that, 'Don't come because our borders may not work at any time.' That is extremely scary and dangerous."