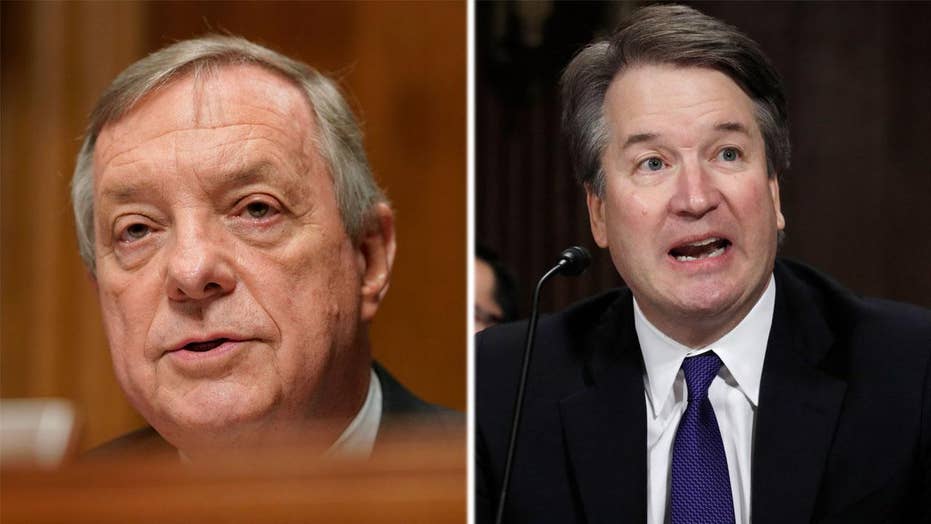 Supreme Court nominee Judge Brett Kavanaugh engaged in a fiery exchange with Democratic Sen. Dick Durbin over calls for an FBI investigation into the sexual misconduct allegations leveled against him by three women.

Durbin, as part of his questioning of Kavanaugh Thursday, challenged the Supreme Court nominee to himself request an FBI investigation of the allegations.

“I’ve got a suggestion for you. Right now, turn to your left, in the front row, to [White House Counsel] Don McGahn,” Durbin said. “Ask him to suspend this hearing and nomination process until the FBI completes its investigation of the charges made by Dr. Ford and others.”

Kavanaugh said in his opening statement that he was open to “any kind of investigation.”

“Senate, FBI, or otherwise. The committee has now conducted a thorough investigation,” Kavanaugh said in his opening statement. “I know any kind of investigation—Senate, FBI, Montgomery County Police—will clear me.”

In response to Durbin’s suggestion, though, Kavanaugh said: “I will do whatever the committee wants to do because I’m telling the truth,” maintaining, however, that the FBI does not reach conclusions.

“I’m innocent of this charge,” Kavanaugh said, adding that the committee is responsible for coming to conclusions of the investigation.

“If there is no truth to her charges, the FBI investigation will show that,” Durbin said.

Kavanaugh responded that he was “telling the truth.”

Senate Judiciary Committee Chairman Chuck Grassley, R-Iowa, interrupted the exchange, and said they were not going to do anything to interrupt the hearing.

“Any senator who’s brought up this issue could have asked for an investigation. The FBI gathers information for the White House, which is sent to the committee,” Grassley said, adding that the FBI found that there was “no federal crime alleged to investigate.”

A spokesman for Biden blasted Republicans for taking Biden’s comments “out of context.”

"There is clearly an effort on the part of the White House and Senate Republicans to take out of context then-Senator Biden's statements about the role of the FBI in the judicial nomination process to create a smoke-screen for their unprecedented refusal to have the FBI conduct an investigation into credible charges,” the spokesman said.

"Senator Biden made those comments in response to Senator Hatch's attempts to frame the FBI's 1991 report on Clarence Thomas as exculpatory. His point was that the FBI plays an investigative role in the nomination process; they do not make recommendations," Biden's spokesman said. "That is the sole responsibility of the Senate -- to advise and consent.  Vice President Biden believes that the FBI should have investigated this case in advance of Dr. Blasey Ford's courageous testimony today, just as they did in 1991."

In a statement released by the White House late Thursday, in an effort to “set the record straight” on the FBI process, they noted that it is “the job of the Senate to assess and investigate a nominee’s qualifications when deciding whether to consent a nomination.”

“The Committee’s standard procedure for supplemental background investigations is to conduct phone or in-person interviews with the relevant parties to discuss the underlying issues,” the White House statement read. “In this case, an FBI investigation would not involve an investigation into the facts surrounding a 36-year-old party.”

The statement added: “That would be outside the FBI’s regular jurisdiction. Instead, the FBI would obtain statements from the alleged participants and pass along those statements to the White House and the Senate Judiciary Committee.”

Alleged participants, according to the White House, have provided statements on the matter to the Committee, which Grassley acknowledged Thursday, listing the names of those Ford claimed were at the gathering where the alleged sexual assault occurred.

“The FBI would not make a determination of the credibility of these allegations, or of Judge Kavanaugh’s guilt or innocence in this matter,” the White House said.