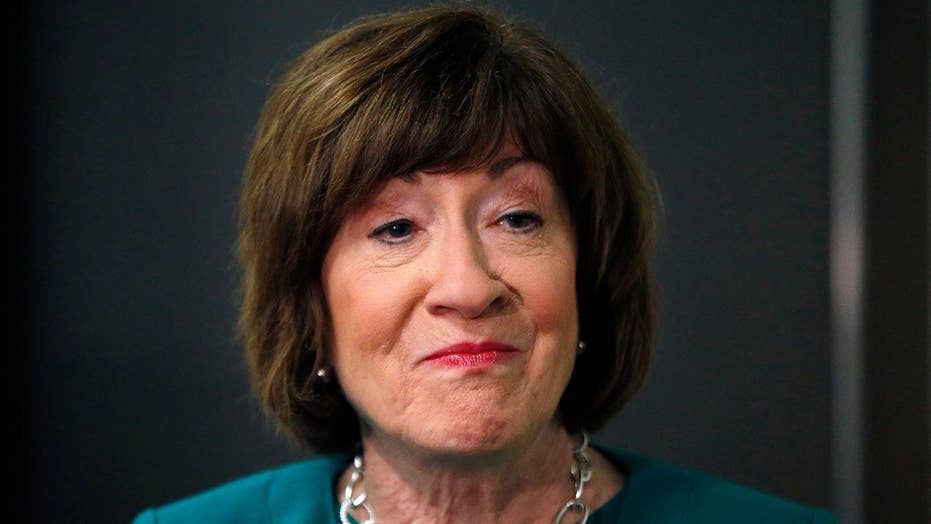 Jonathan Turley on Susan Collins and the mob mentality

Critics of Sen. Susan Collins, R-Maine, renewed their attacks Monday on the perpetual swing-vote senator after Supreme Court Justice Brett Kavanaugh -- whom she helped confirm -- dissented on a decision that effectively incorporated gay and transgender people into a protected class under the Civil Rights Act of 1964.

A 6-3 majority of the court, led by Trump-appointed Neil Gorsuch, who was joined by Chief Justice John Roberts and the four liberal justices, ruled that firing someone because they identify as gay or transgender falls under the ban in Title VII of the act on employment discrimination "because of sex."

But the other three conservative justices dissented, including Kavanaugh, largely saying that because Congress did not take gay or transgender status into consideration when writing the law, the Supreme Court could not reinterpret the law to make that the case. That's a "separation of powers" argument which is very common at the Supreme Court level on a number of topics.

Collins has historically been supportive of gay rights, and lauded Monday's ruling in Bostock v. Clayton County as "a major advancement for LGBTQ rights." She also pressed Congress, in a separate tweet, to "pass the Equality Act & amend the Civil Rights Act to expressly prohibit discrimination on the basis of sexual orientation & gender identity."

But despite Collins' personal comments on the ruling, liberal court-watchers used the fact Collins voted to confirm Kavanaugh as a battering ram against the senator, who is up for reelection this year.

"Susan Collins voted to confirm Brett Kavanaugh, who just voted to allow companies to fire employees for being LGBT. She is a right-wing hack and needs to go," Zac Petkanas, a former senior adviser to Hillary Clinton, said.

"Susan Collins will likely find it very 'troubling' that Brett Kavanaugh is *to the right of Neil Gorsuch and John Roberts* when it comes to discrimination against LGBTQ workers," said Brian Fallon, also a former Clinton staffer and currently the executive director of Demand Justice, a liberal group that opposes Trump judicial nominees.

Demand Justice itself also got in on the anti-Collins action, angrily quote-tweeting two posts by Collins.

"You put Brett Kavanaugh on the bench even after he wouldn't say whether he supported same-sex marriage. He tried to stop this landmark ruling. Delete this," one post said.

"You voted to confirm Brett Kavanaugh. Today he voted to allow the kind of discrimination you claim to be working to overturn. What are you really working for?" said another.

"Susan Collins fave Brett Kavanaugh also dissented from the Supreme Court’s majority in the matter of certain gun laws," he added in another.

Collins' critics, however, did not delve into the substance of Kavanaugh's dissent in Bostock, which actually celebrated the ruling he opposed.

"Notwithstanding my concern about the Court’s transgression of the Constitution’s separation of powers, it is appropriate to acknowledge the important victory achieved today by gay and lesbian Americans," Kavanaugh wrote. "Millions of gay and lesbian Americans have worked hard for many decades to achieve equal treatment in fact and in law. They have exhibited extraordinary vision, tenacity, and grit—battling often steep odds in the legislative and judicial arenas, not to mention in their daily lives."

Kavanaugh added: "Under the Constitution’s separation of powers, however, I believe that it was Congress’s role, not this Court’s, to amend Title VII. I therefore must respectfully dissent from the court's judgment."

Additionally, Collins has voted for all six Supreme Court justices who have been considered since she entered the Senate, four of whom were in the majority Monday.

Collins voted for Chief Justice John Roberts, as well as Justices Sonia Sotomayor, Elena Kagan and Gorsuch. Only Justices Samuel Alito and Kavanaugh got votes from Collins and were in the minority here.

This is not the first time Collins has come under fire for reasons relating to Kavanaugh -- or the most severe. In a December 2018 interview on "The Story" with Martha McCallum, she revealed what the left-wing pressure campaign against her during Kavanaugh's confirmation battle looked like to her and her staff.

"There were protests at my home for six weeks in a row, protests at my home here in Washington, death threats, threats of sexual assault against me and my staff," Collins said. "But, what I'll never understand is why anyone would think that I would be intimidated by those tactics and that they would be successful in converting me or causing me to vote against Judge Kavanaugh."

Nevertheless, Collins' detractors persisted targeting the lawmaker whose seat could be key in deciding the Senate majority in November.

"Today's Supreme Court decision is a victory for LGBTQ Americans and an overdue step towards equality under the law for all," Sara Gideon, Collins' Democratic opponent, said in a tweet. "But make no mistake—Susan Collins played a key role in Trump & McConnell's plan to remake the judiciary with far-right, unqualified, anti-LGBTQ nominees."

She added in a separate post: "Judge Kavanaugh voted against banning companies from firing employees for being gay or transgender. It's clear that Senator Collins will continue to be a reliable vote for Trump’s anti-LGBTQ+ nominees."