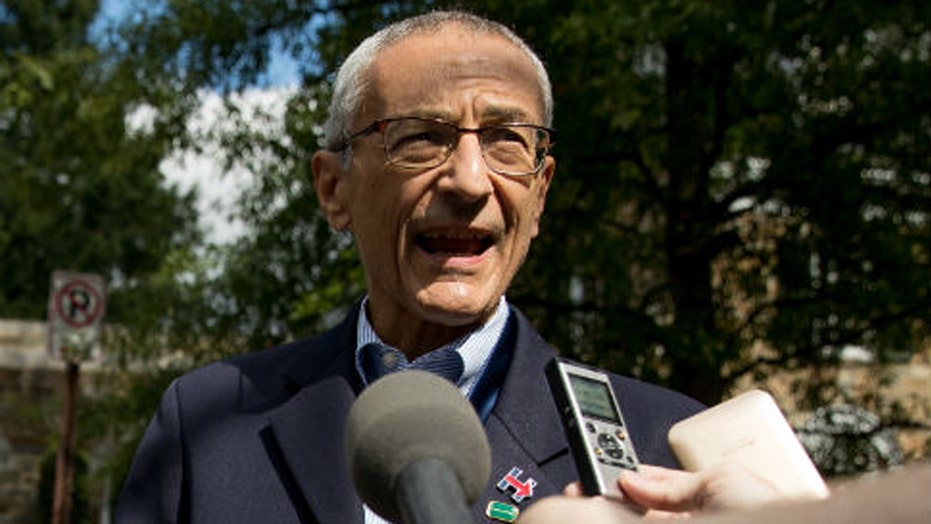 A Justice Department official with close ties to Hillary Clinton Campaign Chairman John Podesta sent him a "heads up" last year to warn that lawmakers might question witnesses about the presidential candidate's private emails, messages released Wednesday by WikiLeaks show.

Assistant Attorney General Peter Kadzik, the official now in charge of informing Congress about the revived Clinton email probe, gave a personal status update to the Clinton campaign in the email sent May 19, 2015.

The message from his Gmail account to Podesta was titled: “Heads up.”

“There is a [House Judiciary Committee] oversight hearing today where the head of our Civil Division will testify,” Kadzik wrote. “Likely to get questions on State Department emails.”

The warning came just two weeks after Kadzik’s son had written to Podesta asking for a job on Clinton’s presidential campaign. Clinton spokesman Glen Caplin told Fox News that Kadzik's son did not ever work for the campaign.

In the same May 19 message, Kadzik also gave an update about a separate filing in a related Freedom Of Information Act case.

PODESTA: DOJ OFFICIAL 'KEPT ME OUT OF JAIL'

“Another filing in the FOIA case went in last night or will go in this am that indicates it will be awhile (2016) before the State Department posts the emails,” he wrote.

Kadzik likely was referencing a brief submitted on May 18 in which the State Department proposed releasing 55,000 pages of Clinton’s emails in January 2016. Podesta forwarded Kadzik’s message to a group of top Clinton aides – including Press Secretary Brian Fallon and adviser Cheryl Mills – with the cryptic comment: “Additional chances for mischief.”

Republican presidential nominee Donald Trump referenced the email during a rally in Miami on Wednesday. He said Kadzik was “feeding information to the Clinton campaign.”

“These are the people that want to run our country folks,” he said. “The spread of political agendas into the Justice Department … is one of the saddest things that has happened to our country."

The relationship between Kadzik and Podesta goes back nearly two decades. When prosecutors were eyeing Podesta for his alleged role in trying to secure a job for then-Bill Clinton mistress Monica Lewinsky, Kadzik successfully represented Podesta. Later, Kadzik took a job lobbying for a presidential pardon for tax cheat Marc Rich. A congressional report indicated Kadzik got the job in part because of his rapport with Podesta.

A Justice Department spokesman, though, downplayed the significance of Kadzik’s 2015 email, saying it was “about public information” and sent “in his personal capacity, not during work hours.”

Lewis, who would not characterize the substance of the email, said officials in the department do not typically provide campaign advice.

“It is not department practice to provide any strategic guidance to any campaign,” said Lewis, who did not answer when asked if Kadzik’s behavior was acceptable to the Justice Department.

Kadzik's "heads up" may have been of limited use to the Clinton campaign.

Benjamin Mizer, a deputy assistant attorney general in charge of the Civil Division, did end up testifying before a House subcommittee hearing at 1 p.m. on May 19. However, it doesn’t appear the email topic came up in his questioning.

And it seems the Clinton camp already was well aware of the State Department FOIA case filing.

On May 18, Fallon received a copy of the filing from someone inside the Justice Department and forwarded the document to Mills, Podesta and others. It’s unknown who the original sender was because the person’s name was stripped before Fallon forwarded the message. Lewis told FoxNews.com he also didn’t know “who Brian spoke to.”

Fallon gave another update to Clinton’s most-trusted aide, Huma Abedin, on May 19.

“DOJ folks inform me there is a status hearing in this case this morning, so we could have a window into the judge's thinking about this proposed production schedule as quickly as today,” he wrote.

Most of the 55,000 pages of emails Clinton turned over were eventually released, with redactions, by March 2016.

The Clinton campaign disputed that Kadzik had alerted them to anything about the email release or the House hearing.

"Without authenticating the email itself, the idea the campaign wasn’t aware of a public hearing and a public notice in real time is nonsense," Caplin told Fox News in an email.