The Justice Department’s internal watchdog is probing James Comey's handling of classified information as part of the memos he gave to a friend documenting discussions with President Trump.

A source familiar with the probe confirmed to Fox News the inspector general is looking at whether classified information was given to unauthorized sources as part of a broader review of Comey's communications outside the bureau -- including media contact.

The developments put the ex-FBI boss in the crosshairs of an investigation just as his former deputy, Andrew McCabe, faces a criminal referral over a separate leak.

The Wall Street Journal reported that at least two of those Comey memos have been to found to contain material now deemed classified, prompting the inspector general investigation.

A broader set of memos detailing Comey’s conversations with Trump were handed over to Congress Thursday evening. 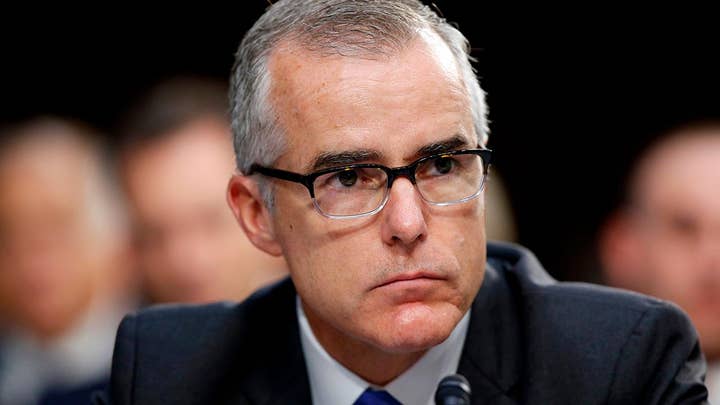 Comey has maintained he didn’t release any memos containing classified material. In his testimony last year before the Senate Intelligence Committee, Comey said he made the decision to document the interactions in a way that would not trigger security classification.

But the newly released memos could cause problems for Comey.

The Journal noted that Comey himself redacted classified elements in one of those memos, and another memo had material later upgraded by the FBI to “confidential” (a low classification level).

They apparently were among the four memos Comey gave to friend Daniel Richman, a professor at Columbia Law School.

In the seven total memos handed over to congressional committees, eight of the 15 pages have redactions under classified exceptions. They include classified information at one of the most sensitive levels -- SECRET -- as well as the lower level of confidential.

In one memo documenting his January 2017 Trump Tower meeting, Comey wrote that the material should be classified at the SECRET level unless the intelligence agencies thought otherwise.

“I am not sure of the proper classification here,” Comey writes, “so have chosen SECRET. Please let me know if it should be higher or lower than that.”

This, too, could be at odds with Comey’s June 2017 Senate testimony that he avoided classified material in the memos so that they could be widely shared.

The scrutiny of Comey comes as his former deputy McCabe faces potential legal complications from another IG probe that found he lied about a leak to The Wall Street Journal. The IG referred the findings to the U.S. attorney for Washington, D.C., to determine whether to seek charges.

Comey has backed the IG’s findings and said Thursday that he "could well be a witness" in a criminal case against McCabe.