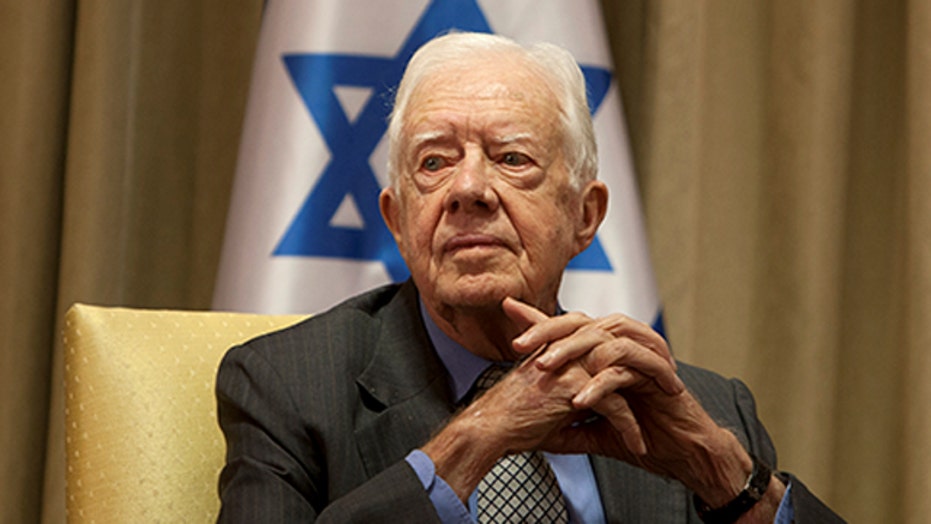 Former President Jimmy Carter once again is getting way out in front of the U.S. government on the Middle East, co-authoring an op-ed in which he calls for Washington to recognize designated terror group Hamas as a legitimate "political actor" -- while blasting Israel for its military campaign in the Gaza Strip.

The scathing column on ForeignPolicy.com was written by Carter and Ireland's former president Mary Robinson.

The article called the current conflict a "humanitarian catastrophe," and while acknowledging Hamas' "indiscriminate targeting" of Israelis, focused its criticism on Israel.

"There is no humane or legal justification for the way the Israeli Defense Forces are conducting this war," they wrote. "Israeli bombs, missiles, and artillery have pulverized large parts of Gaza, including thousands of homes, schools, and hospitals."

They said "deliberate attacks on civilians" constitute "war crimes" on both sides, though noting far fewer Israelis have been killed in the fighting.

The two "elders" (a group of former statesmen and activists) also pushed the West to formally recognize Hamas, which controls the Gaza Strip but is considered a terror group by the U.S. They lauded the recently announced unity agreement between Hamas and Fatah, which controls the West Bank -- an agreement that Obama's State Department has voiced serious concerns about.

"The international community's initial goal should be the full restoration of the free movement of people and goods to and from Gaza through Israel, Egypt and the sea. Concurrently, the United States and EU should recognize that Hamas is not just a military but also a political force," Carter and Robinson wrote. "Hamas cannot be wished away, nor will it cooperate in its own demise. Only by recognizing its legitimacy as a political actor -- one that represents a substantial portion of the Palestinian people -- can the West begin to provide the right incentives for Hamas to lay down its weapons."

Carter has voiced support for Hamas in the past, and in 2009 visited with Hamas leaders on a high-profile trip.