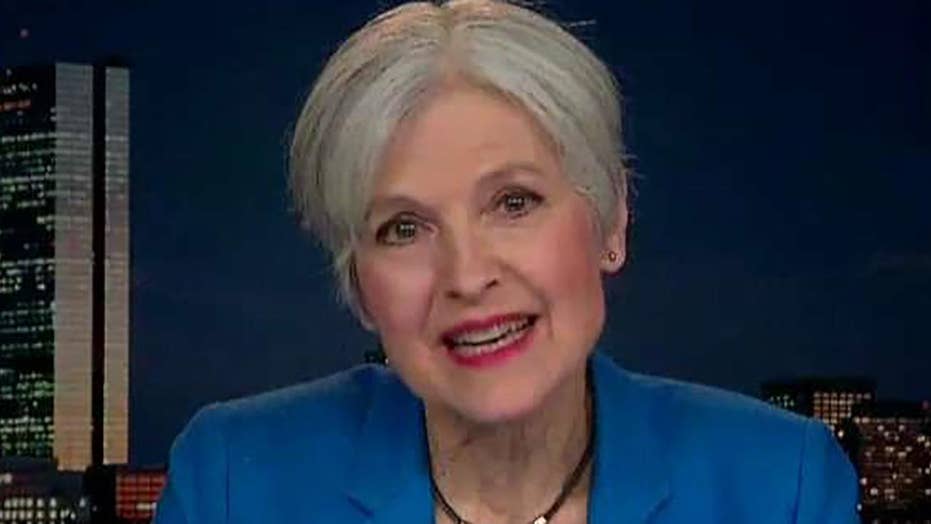 Stein: Russia probe is punishment for running for president

Former Green Party presidential candidate Jill Stein fires back at allegations of Russia collusion for just being at the same conference as Putin. #Tucker

Stein confirmed earlier this week that the Senate Intelligence Committee had contacted her campaign to request documents, including emails, as part of its investigation into Russian activities and alleged collusion between campaigns and foreign interests.

"I think there are legitimate aims here in the investigation," Stein told Fox News' "Tucker Carlson Tonight." "Interference in our election is much bigger than the Russians and ... I would like to see the evidence of Russian culpability here."

Stein compared the Russia investigation to the run-up to the Iraq War, saying, "We didn’t get to really see the evidence [then] ... We are still paying that price -- $5.5 trillion and counting. Fool me once, shame on you. Fool me a gazillion times, shame on all of us."

Stein also addressed her attendance at a now-infamous dinner in Moscow marking the 10th anniversary of RT, a Russian state-run news and propaganda channel. She was photographed sitting at a table with Russian President Vladimir Putin and future national security adviser Michael Flynn, who is now cooperating with Special Counsel Robert Mueller's investigation.

"The dinner ... was really a non-event," Stein said. "At one point, Putin came in with a couple of guys that I assumed were his bodyguards. Turns out they were actually his inner circle, but you would have never known it. Nobody was introduced to anybody ... At one point, Putin made a very rapid turn around the table and shook everybody’s hand, but without any exchange of names, so that’s about as significant as this was."