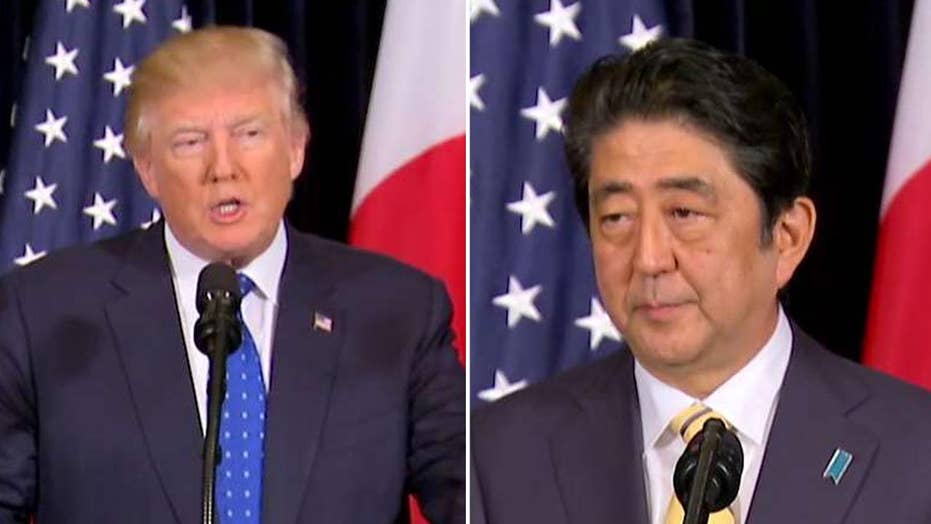 The United States and Japan held a joint press conference on Saturday night following reports that North Korea fired a ballistic missile in what would be its first such test of the year.

President Donald Trump assured Japan that the U.S. stands behind the country completely.

“The United States of America stands behind Japan, its great ally, 100 percent,” Trump said during the conference at Trump’s south Florida estate.

Abe read a brief statement in which he called on North Korea “to fully comply with relevant U.N. Security Council resolutions.” He said Trump has assured him of U.S. support and that Trump's presence showed the president's determination and commitment.

North Korea reportedly fired a ballistic missile early Sunday in what would be its first such test of the year and an implicit challenge to President Donald Trump's new administration.

The missile splashed down into the sea between the Korean Peninsula and Japan, according to the U.S. Strategic Command. Japanese Chief Cabinet Secretary Yoshihide Suga told reporters that the missile did not hit Japanese territorial seas.

The appropriate officials “remain vigilant in the face of North Korean provocations and are fully committed to working closely with our Republic of Korea and Japanese allies to maintain security,” the spokesman said in the statement, adding that the launch was from “a medium- or intermediate-range ballistic missile.”

The missile launch reports come as Trump was hosting the Japanese leader and just days before North Korea is to mark the birthday of leader Kim Jong Un's late father, Kim Jong Il.