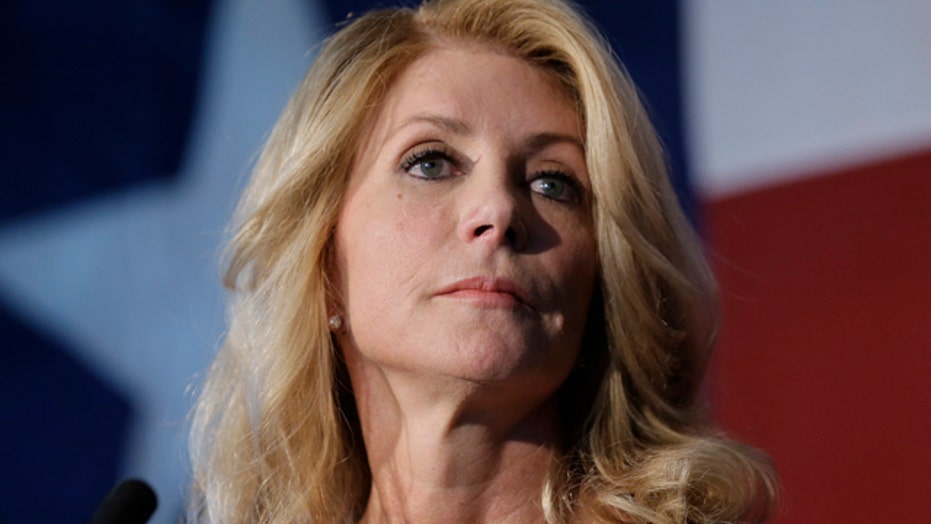 As a feisty state senator with pink sneakers and a fist in the air, Wendy Davis captured both the love and the ire of America last year when she pulled an 11-hour filibuster of anti-abortion measures in the Texas Capitol.

But after using that star power to win her party's nomination for governor, Davis is still struggling to take a lead over Republican Attorney General Greg Abbott, and some say party confidence in her race is waning.

"I think the frustration in some Democratic circles is that, despite her star power and substantial war chest, she has not been able to move the dial against Greg Abbott after a year on the campaign trail," Mark Jones, political science professor at Rice University in Houston, told FoxNews.com.

Even the high-profile, abuse-of-power indictment of Republican Gov. Rick Perry, whom Davis hopes to replace, didn't seem to hurt Abbott or raise the Democrat's profile over the media din.

Larry Sabato, director of the University of Virginia Center for Politics, said the Perry indictment might even give Abbot "a bit of a boost since Republicans are so angry that it happened."

In an illustrative moment, Davis, 51, was forced to hit back against the head of the Democratic Governors Association back in April when he suggested publicly that her race wasn't competitive enough to be considered a top-tier priority. "We're hopeful in Texas, but we all understand that Democrats haven't won Texas in a long time," DGA Chairman and Vermont Gov. Peter Shumlin told reporters.

It didn't take long for Davis, an attorney who has been serving in the Texas state Senate since 2008, to respond. She called Shumlin "uninformed" and a "Washington, D.C., desk jockey." But by then, the media narrative that Davis's campaign was on an impossible journey was on its way.

It's been a tough narrative to break.

"For Wendy Davis, Filibuster Goes Only So Far in Race to Be Governor of Texas," blared a headline in The New York Times in June, along with an accounting of the campaign's alleged weaknesses, including the hiring of a Washington, D.C., operative instead of a Lone Star State political veteran for her campaign manager. "She didn't have any Texas experience," Jones said of campaign manager Karin Johanson, who has since left.

Others say the Davis campaign did a poor job of "controlling her own story." A Dallas Morning News profile back in January, for instance, poked holes in what had ostensibly been a rags-to-riches journey. "I hated that piece," Cenk Uygur, co-host of the progressive "Young Turks" said at the time. "It was a hatchet job ... and of course the conservatives loved it and went to town on it."

Jones said "the bubble was burst" by some of the revelations in the story, like that Davis pursued her law degree at Harvard, which her husband had paid for by liquidating his own 401k fund. They later divorced.

Analysts cited a recoil from that story, and shortly afterward a poll was released showing that her unfavorability ratings were actually going up among women.

Until August, state polls generally had her trailing Abbott, by between 10 and 15 points on average. Analysts say any Democrat would have a difficult time winning in a Republican-dominated state that President Obama lost by 16 percentage points in 2012.

"Media hype does not produce votes most of the time," Sabato said. "Wendy Davis received enormous amounts of state and national coverage, but the Democratic base in Texas is nowhere near a majority of the electorate."

Not everyone agrees. The media narrative is so bound to the notion that no Democrat can win the red state -- much less a left-of-center liberal who during the debate over new abortion restrictions accused Perry of "demonizing women" -- that some are ignoring the latest poll.  An Aug. 8 survey by  Rasmussen showed Davis only trailing Abbott by 8 points. (As for the abortion restrictions, they passed anyway even after the filibuster, but they were recently put on hold after a federal judge found them unconstitutional.)

"The intelligence you have is not correct at all -- the level of excitement for Wendy this summer has been tremendous," exclaimed Jan Soifer, chairwoman of the Travis County Democratic Party in Austin, in an interview with FoxNews.com.

"In the heat of the summer in Texas we never get this level of enthusiasm, but we are," she added. "It's amazing."

Political analyst Liz Chadderdon agrees that the whole story is not playing out in press. "She has energized people that have not been energized for Texas governor's races," she said.

According to recent reports, Davis has raised $27 million, while Abbott has raised $35 million.

Davis' campaign did not return repeated requests for comment.

Reaching out for the women's vote is part of the strategy as Davis recently released an ad accusing Abbott of dissenting in a ruling that made a vacuum company liable for a rape of a woman by a door-to-door salesman in 1998. Abbott was a state Supreme Court justice at the time. Fact-checker PolitiFact called the ad "mostly true."

Analysts say Abbott has kept his powder dry by not spending as much on ads, which means he could unleash a barrage of ads against her in response, and in the last crucial weeks of the campaign, if he wishes.

"Her campaign has been far too concerned with why Greg Abbott wouldn't be a good governor and not why Wendy Davis would be a good governor," Jones said. "She is not giving women a good enough reason to vote for her."

That's just not so, said Soifer, who claimed Davis is poised to bring women, who are historically low-turnout voters in Texas, to the polls in November.

That's what Austin resident Mary Patrick, a volunteer for Davis, says too. "I think all kinds of people can win here, including Democrats," she told FoxNews.com.