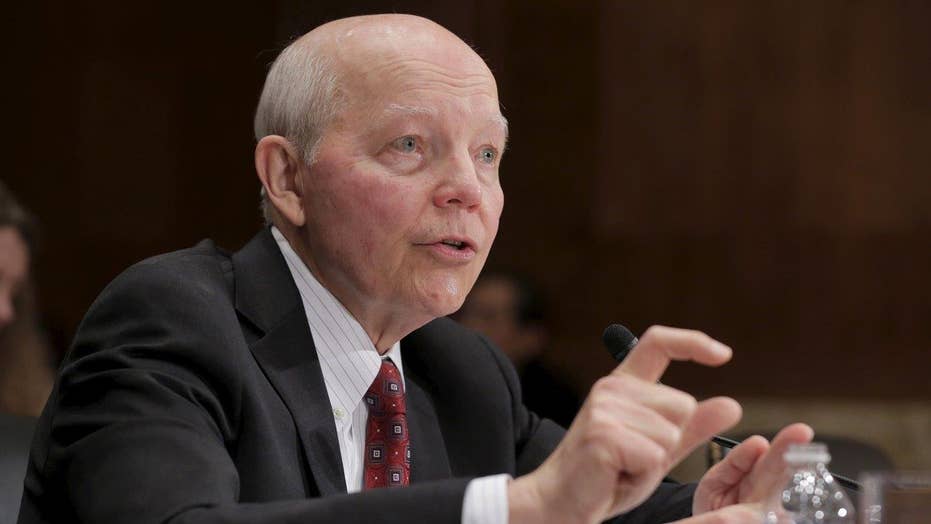 Rep. Louie Gohmert, (R-Texas), with the latest on the investigation into the IRS targeting scandal.

IRS Commissioner John Koskinen faced tough questioning Wednesday from Republicans at his Capitol Hill impeachment hearing, where he admitted “failings” in responding to congressional probes into his agency’s targeting of conservative groups – but seemed unable to satisfy some lawmakers’ concerns about 2014 testimony that later turned out to be false.

The commissioner maintained that he had not committed the offenses he’s accused of, and that impeachment would be “improper.”

But his 2014 testimony quickly emerged as a focal point. Koskinen, who was brought in to lead the agency after the targeting scandal flared, had told lawmakers in June 2014 that no emails had been destroyed since congressional investigations began. Yet backup tapes containing numerous emails had been erased by IRS workers in March of 2014.

Koskinen says he didn’t learn about that until later, and reiterated Wednesday he believed his June 2014 statement was true at the time.

“The statement was not correct in light of that evidence,” he acknowledged Wednesday before the House Judiciary Committee.

But Rep. Jim Jordan, R-Ohio, noted that a top official in senior management had learned about missing emails in early 2014, shortly before the backup tapes were destroyed.

Jordan said Koskinen’s explanation feeds a perception of a “double-standard.”

“All we're asking is this guy no longer hold this office, that's all we're asking,” Jordan said. “And in light of this fact pattern, I think that's the least we can do.”

In his opening statement, Koskinen said: "The truth is that we did not succeed in preserving all of the information requested and some of my testimony later proved mistaken. I regret both of those failings."

Besides opposition from Democrats, though, the push has divided Republicans and stands little chance of garnering the votes Congress would need to oust him.

The hearing Wednesday was scheduled as a result of negotiations inside the Republican ranks.

Many GOP lawmakers want to avoid an impeachment showdown in the shadow of November's elections. That would force them to choose between opposing impeachment and angering conservative voters who want Koskinen's head, or backing it and alienating independents who could consider the effort overly partisan and confrontational.

Despite numerous probes by Congress, the Justice Department and the IRS' independent inspector general, no proof has emerged that the IRS's treatment of conservative organizations was politically motivated or that any documents were purposely destroyed to hide evidence.

The Constitution provides impeachment for "treason, bribery, or other high crimes and misdemeanors."

Last week, members of the conservative House Freedom Caucus, which has pushed the impeachment drive, agreed to Wednesday's hearing after dropping plans to force an immediate House impeachment vote. Caucus members conceded they would have likely lost.

However, one lawmaker in that group, Rep. Tim Huelskamp, R-Kan., has not ruled out forcing an impeachment vote before the November elections.

In May 2013, the IRS conceded that during the 2010 and 2012 elections, it subjected conservative groups seeking tax exemptions to excessively harsh examinations. Many groups with those tax-exemptions play major roles in political campaigns, and they are not required to reveal donors.

Koskinen joined the agency in December 2013, after the improper actions occurred. A focus of congressional investigations was Lois Lerner, who had led the IRS office that processes applications for tax exempt status. She refused to answer lawmakers' questions and later retired.

In June 2014, the IRS told Congress that it lost an unknown number of Lerner's emails when her hard drive crashed in 2011. Then in June 2015, the IRS inspector general said the agency had accidentally erased 422 backup tapes in March 2014 that could have had up to 24,000 of Lerner's emails.

Koskinen and Democrats have complained that Republicans have skirted Congress' normal impeachment procedures, which in recent decades have usually begun with a formal, in-depth committee investigation, not just hearings.

Rep. John Conyers, D-Mich., the panel’s top Democrat, said Wednesday that the impeachment push is “destined to fail” – and warned that if it does hit the floor, it would set a “terrible precedent.”

The House needs a majority vote to impeach an official, in effect formally charging them. The Senate holds a trial and needs a two-thirds majority to remove the official from office.