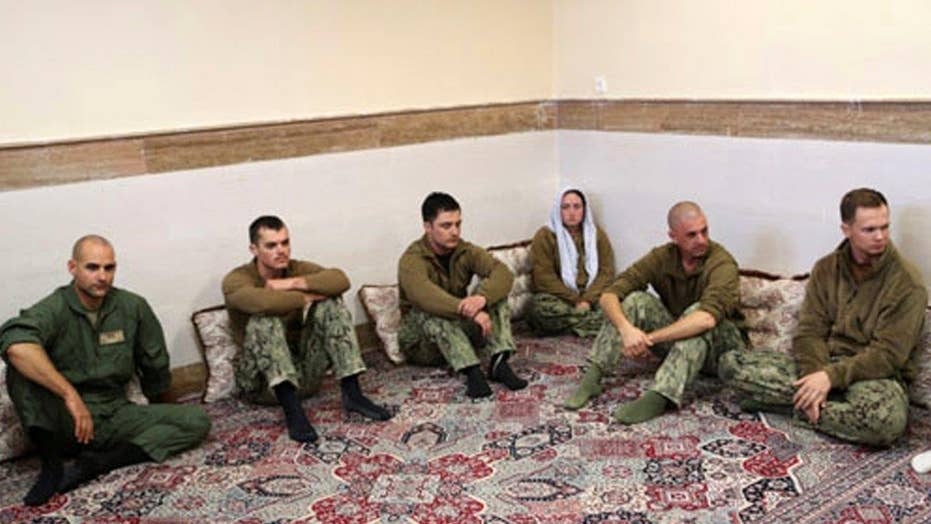 Growing concerns in DC over detention of US sailors by Iran

Within hours of releasing 10 U.S. sailors who apparently had drifted into their territorial waters, the Iranian government was using footage from the incident as a propaganda tool – including images of sailors on their knees with their hands behind their heads and a video showing a sailor apologizing.

“It was a mistake. That was our fault. And we apologize for our mistake,” the sailor said, in a brief state TV clip posted on Twitter by a journalist with Iran’s Tasnim News Agency.

#Iran state TV showed a footage in which the commander of #US sailors made an apology. #navy #Pentagon pic.twitter.com/VCdjEZiY54

Secretary of State John Kerry and others have cited the peaceful resolution as a “testament” to diplomacy and the new U.S.-Iran relationship, as they welcome Iran into the “community of nations.”

But the various images and clips of the sailors since circulated by Iranian media could prove embarrassing.

Images purported to show the sailors with their hands over their heads when they were arrested, and Iranian officials boarding their ships.

In the video clip of the apology, a sailor identified as the “commander” is being interviewed about his team’s actions. He apologizes, and also seems to acknowledge they drifted into Iranian territorial waters.

In response, State Department spokesman Mark Toner said Wednesday that the department would assess whether the video is authentic. He noted images of prisoners are not supposed to be shown under the terms of the Geneva Convention.

But Toner said the initial assessment is that the sailors were treated well.

There were earlier indications such a video might exist.

Speaking with Fox News earlier Wednesday, a U.S. defense official could not completely rule out an apology at lower levels.

“If I say no and some iPhone video emerges from Iran with a 20-year-old sailor apologizing, I will look silly,” the official said.

However, a senior State Department official told Fox News that there was “no apology from Kerry” to the Iranians.

White House Press Secretary Josh Earnest also said Wednesday that a formal apology never occurred, and he wasn’t aware that one was ever even discussed.

Rep. Duncan Hunter, R-Calif., a Marine veteran, warned about the implications of the video apology from the sailor, though.

“In the Marine Corps, we were lectured about the strategic corporal—meaning any American can have an impact on American foreign policy. This apology—regardless of context—is going to be misused to diminish American power in the world and to bolster the terrorist state of Iran,” he told Fox News.

U.S. military officials at the Pentagon said the State Department was in the lead on negotiations with Iranians.

A Pentagon statement said the Navy would "investigate the circumstances that led to the Sailors' presence in Iran."

Officials are still uncertain of how Iranian forces managed to commandeer the two boats. A U.S. official told Fox News that a mechanical problem on at least one of the boats could not be ruled out, but could not explain how both boats were able to get underway in such a short time if one did have a propulsion issue, which would have caused it to stop running and drift into Iranian territorial waters.

According to a senior State Department official, the department first learned of the incident Tuesday at noon. Kerry spoke at least five times with his Iranian counterpart to secure the release of the crew.

According to the official, Kerry told the foreign minister, “If we were able to do this, we will make this into a good story.”

The U.S. Navy actually has come to the aid of Iranians in the Gulf before; in 2012, a Navy destroyer rescued an Iranian fishing boat taken over by suspected pirates.