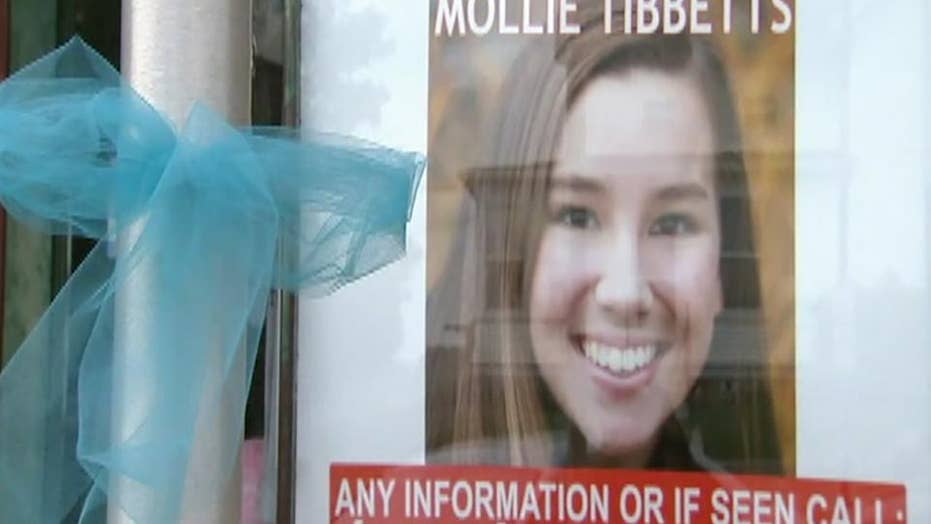 The killing of Iowa college student Mollie Tibbetts, allegedly at the hands of an illegal immigrant, has placed a spotlight on the state's Democratic party, which this summer denounced federal immigration laws and called for local officials not to enforce them.

But Iowa Democratic party officials on Wednesday would not say whether they stood by their immigration platform, and instead characterized the matter as a "partisan fight."

The national uproar over Tibbetts' slaying also threatens to upend two key House races underway in the state, which are considered potentially pivotal to Democrats' chances of retaking the House in November's midterm elections.

The platform was adopted at a state convention in June. It goes on in a "Statement of Principles" to "affirm the Democratic Party’s contributions to our nation’s heritage, accomplishments, and diversity."

Asked directly whether Iowa officials still did not want local police to enforce federal immigration law, Price did not respond. Abby Finkenauer and Cindy Axne, the two candidates Democrats have nominated to take on vulnerable Republican congressmen in the state, did not immediately respond to Fox News' inquiries as to their positions on the party platform.

On Wednesday, an Iowa judge ordered Cristhian Rivera, the 24-year-old illegal immigrant accused of killing Tibbetts, held on $5 million cash-only bond. Rivera was mostly stoic and looked straight ahead in the courtroom. He wore headphones and used an interpreter when the judge spoke, only answering "Yes" when asked if he understood the proceeding.

A body believed to be Tibbetts was discovered Tuesday hidden in a corn field beneath several corn stalks after Rivera led authorities to the location.

Tibbetts' killing has fueled Republican calls to strengthen border security, while raising questions as to how Rivera was able to enter and remain in the country.

Rivera worked at a dairy farm, Yarrabee Farms, for the past four years -- less than three miles from where the 20-year-old University of Iowa student was staying the night she vanished in July. The company said he was in good standing as a worker and was shocked to learn of his alleged involvement in Tibbetts' disappearance and murder.

The suspect told law enforcement he approached Tibbetts while she was running, according to authorities. He claimed to have blacked out and realized later that he had put Tibbetts in his trunk. Investigators said they believed Rivera had been in the area for four to seven years.

"Molly Tibbetts, an incredible young woman, is now permanently separated from her family.  A person came in from Mexico Illegally and killed her.  We need the wall, we need our immigration laws changed. We need our border laws changed. We need Republicans to do it because the Democrats aren’t going to do it. This is one instance of many," the president said in a video posted to Twitter.

Both races are toss-ups, and are considered key contests as Democrats try to retake the House in the midterms. That would require Democrats winning a total of 24 currently GOP-held seats.

Immigration had played a significant role in two campaigns even before Tibbetts' disappearance.

Axne has vowed to a provide a "full path to citizenship for Dreamers and undocumented immigrants who don't have a criminal background," referring to illegal immigrants brought to the country as children. The progressive Finkenauer also has come out in support of immigration reform.

Neither Axne nor Finkenauer responded to Fox News' requests for comments on the Tibbetts case.

On the Republican side, Young had taken a moderate approach to the issue, saying he wanted border security but also a path to citizenship for Dreamers, the Des Moines Register reported. Blum, for his part, has called for an end to family separations at the border in the wake of the Trump administration's "zero tolerance" policy on arresting all illegal border crossers, but stressed that media coverage of the issue has been unfair.

The Tibbetts case also could have national political ramifications. The once-fringe call to abolish ICE in recent months has been picked up by top 2020 Democratic prospects, including Sens. Elizabeth Warren, D-Mass., and Kirsten Gillibrand, D-N.Y.

There are signs not all Democrats are ready to take the idea mainstream, though. In July, House Republicans passed a nonbinding resolution expressing support for ICE, effectively daring Democrats to oppose the measure on record. Only 35 Democrats voted against the bill, with 133 voting present.