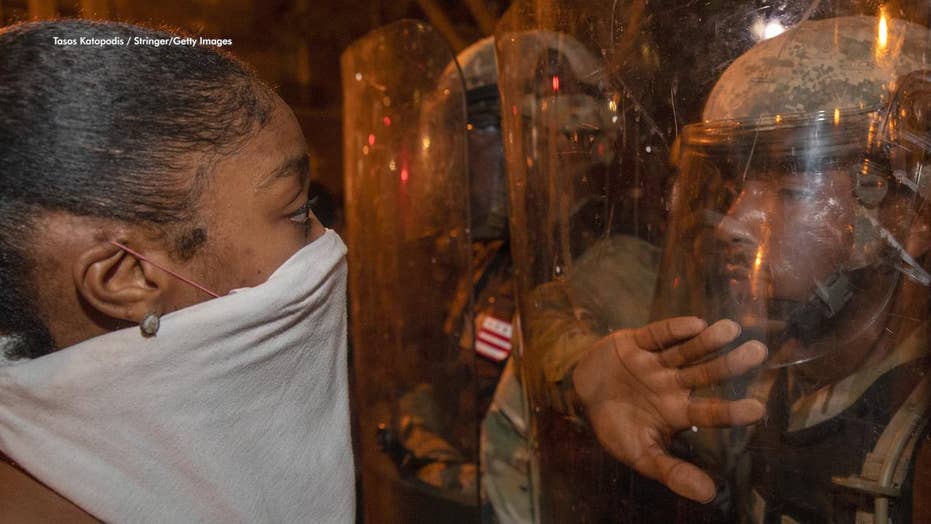 Democratic lawmakers in both chambers are sounding alarms about President Trump's continued threats to invoke the Insurrection Act to deal with the growing violent protests over the death of George Floyd, who died at the hands of police while in custody in Minneapolis.

Democratic lawmakers in both chambers are sounding alarms about President Trump's continued threats to invoke the Insurrection Act to deal with the protests over the death of George Floyd, who died at the hands of police while in custody in Minneapolis. The centuries-old law allows the president to deploy U.S. military domestically to suppress civil disorder.

Senator Richard Blumenthal, D-Conn., introduced legislation to rein in the president's authority when implementing the Insurrection Act after a heavy militarized presence was seen in Washington, D.C., to control protestors around Lafayette Park near the White House. Blumenthal sees the action at the park as a threat to freedom of assembly.

The bill would require Congress to be consulted before a president can use the law and would limit the use of it to 14 days unless lawmakers agreed to extend it.

House Armed Services Committee Chairman Rep. Adam Smith, D-Wash., wants Secretary of Defense Mark Esper and Chairman of the Joint Chiefs of Staff Mark Milley to testify in front of his committee to explain their recent moves and actions. Today, Fox confirmed that Esper and Milley are refusing to appear before the committee next week.

“I remain gravely concerned about President Trump’s seemingly autocratic rule and how it affects the judgment of our military leadership. I have called for Secretary of Defense Mark Esper and Chairman of the Joint Chiefs of Staff, General Mark Milley, to testify before our committee to explain this domestic engagement to the American people. The fate of our democracy depends on how we navigate this time of crisis," Smith's office said in a statement.

But under the 1807 law, signed by President Thomas Jefferson, the president does have the authority to call in federal troops to quell riots, according to those who study the ramifications and interpretations of the law.

WHAT IS THE INSURRECTION ACT?

"The way the act is supposed to work is the president has to issue an order to the rioters to stand down. If they don’t stand down, then he can use troops to suppress it," Peter Feaver, a specialist in civil-military relations at Duke University, told Fox News.

The law was last put into place by President George H.W. Bush in 1992 after parts of Los Angeles were looted and burned over the beating of Rodney King. Then-California governor Pete Wilson requested additional military support from the federal government at the time. However, that isn't the case with the Floyd protests. No governor has requested such assistance.

Feaver says even then it was considered controversial and the military and subsequent administrations have been reluctant to use the law since.

"I remember that the military was mobilized but received criticism for whether there was excessive use of force and there was grave concern at the time that this would not be a good core mission for the military going forward."

White House officials didn't immediately shoot down the consideration to call in armed forces. Speaking to reporters on Thursday deputy press secretary Hogan Gidley said "all options are on the table" when dealing with the protestors.

The debate has caused a rift with defense officials, including the president's relationship with Secretary Mark Esper, who publicly threw cold water on the need for the Insurrection Act, telling reporters in a press conference, "The option to use active-duty forces in a law enforcement role should only be used as a matter of last resort and only in the most urgent and dire of situations. We are not in one of those situations now. I do not support invoking the Insurrection Act."

But some staunch supporters of the president within his own party backed up the consideration. Sen. Tom Cotton, R-Ark., penned a full-throated defense to use the military to control the looting and rioting going on, writing in a highly controversial New York Times opinion column titled, "Send in the Military."

"There is both a legal basis and a long historical precedent for using our National Guard and, if necessary, federal troops to put down domestic violence. And in fact, it is the constitutional duty of the federal government to protect the states from this kind of insurrectionist violence," Cotton told Fox News in an interview with "America's Newsroom."

Protests, for now, have been relatively peaceful compared with earlier in the week, and looting and fires are not as prevalent as they once were last weekend.

Esper ordered active-duty Army units to go back home after he put them on alert in case they would be necessary to respond to the unrest in the D.C. metro area.

But domestic political consequences are playing out just at the mere mention of invoking the law.