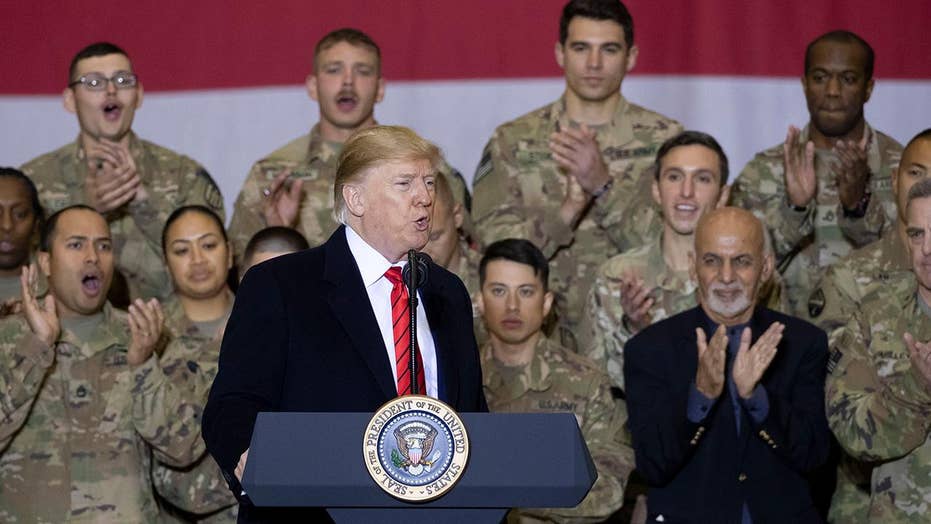 The White House did not inform the president of Afghanistan of President Trump's visit until a few hours before the president landed at Bagram Airbase; Kristin Fisher reports from West Palm Beach, Florida.

Those were my only instructions as I headed out on a top-secret Thanksgiving trip with the president of the United States.

“Are you Kristin?” said a man on top of the parking garage who looked like he was in the Secret Service, but wouldn’t confirm it. Once we were rolling to Joint Base Andrews, he hit me with the bomb that I knew was coming. “In a few minutes, I’m going to need to take all of your cell phones, iWatch, iPad, MiFi -- anything that can transmit a signal.”

I had prepared for this moment. I’d written down about a dozen phone numbers in a notebook that I never use. I scribbled out the names of people and places I might encounter without access to Google for a spell check. I printed out pages and pages of articles that might be relevant for wherever we were going. And yet, I still felt like I was giving away bodily organs as I said goodbye to my three cell phones. “Maybe a digital detox will be good for me!” I quipped, but didn’t mean it. I was really thinking about all the content-that-could-have-been for my Instagram feed.

I was still compulsively checking my pockets for my ghost phones by the time I boarded an aircraft that I can’t disclose and shook hands with people that I cannot name (not because I don’t want to name them, but because most of them wouldn’t tell me their names). Someone asked me if I’d brought food. No. Someone else asked if I brought ear protection. Definitely no. Someone else told me that if I need to use the restroom, use the aircraft’s built-in restroom and not the moderately fancy port-a-potty that had been brought in for the VIPs we were picking up. Noted.

After a two-hour flight to an undisclosed airport in Florida, I was instructed to move up to the cockpit. “The boss is coming.” The move was meant to give the president and the handful of senior advisers traveling with him some privacy from the only member of the press on the plane. But shortly after boarding, President Trump climbed into the cockpit and said, “Where’s the press?” We shook hands and he asked if I was going “all the way.” Yes but, all the way ... where?

Suddenly, there was a pesky dividing wall between us. The president was taking a seat behind the pilot, while I was getting strapped into a seat facing the opposite direction with no way to see or hear the commander-in-chief. I strained my neck as far as the restraints would let me, to the point one crew member told me, “Don’t worry, we’ll let you look out the window after takeoff when the president leaves.” Wait, he’s staying in the cockpit for takeoff? The crew member nodded like he too couldn’t believe it.

I later learned that the crew had no idea who they would be transporting that day until mere hours before the flight. Imagine being that pilot. You wake up one morning having no idea that a few hours later the president of the United States will be sitting behind you, watching your every move as you help him secretly escape from Mar-a-Lago?

When we landed back at Joint Base Andrews, I learned I wasn’t the only one going through communication withdrawals. The highly wired West Wing staffers were too.

Dan Scavino, the White House director of social media, seemed particularly jittery. As for the tweeter-in-chief, the White House scheduled pre-planned tweets to be sent from the president’s Twitter account during the many hours that he was in the dark.

I scoured the tarmac for the bright lights that usually shine on Air Force One before departure, but didn’t see any. After a short drive, we pulled up to a large hangar with Air Force One hidden inside. I’d never been on the plane before and I was trying to savor the moment, but the rest of the White House press corps was already on board and they were peppering me with questions about the secret flight from Florida before I even found my seat. They’re a feisty bunch and one of the best parts of every trip is getting to know the other journalists that cover this beat. 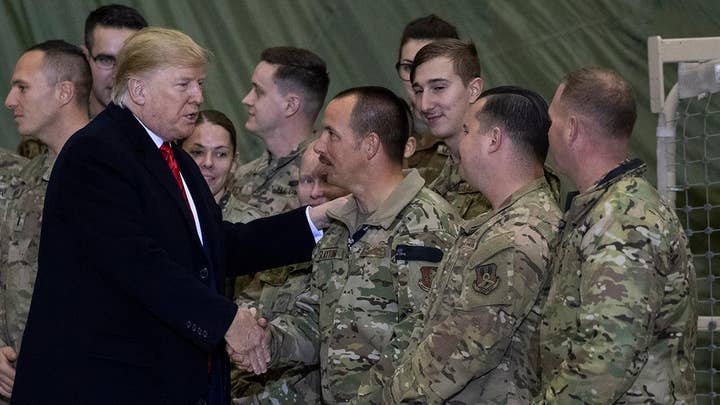 A few hours after the plane took off in total darkness with windows drawn and lights off, White House press secretary Stephanie Grisham came to the back of the plane to brief us. “We’re going to Bagram Air Field in Afghanistan.” This would be President Trump’s second trip to a conflict zone, his first to Afghanistan. The highly clandestine nature of this trip underscored just how dangerous the country remains, 18 years after the U.S. war in Afghanistan began.

After a 13-hour flight, we descended in total darkness – lights off, windows drawn – and touched down on a pitch-black tarmac. As I stepped off the plane, I tried to take a second to soak it in. This is a country I’ve always wanted to come to. When I first met my future mother-in-law 10 years ago, I told her, much to my future husband’s horror, that my dream was to be a war correspondent in Afghanistan. Dreams change, but the desire to visit this country has not. I’d only be getting about three hours on the ground at night due to security concerns, but I was thrilled to be here. I spotted two surveillance blimps in the sky above Air Force One. I smelled the wood (and garbage) that often burns on base. And then, we were off.

It was quite possibly the fastest three-and-a-half hours of my life. The 13 reporters and photographers on the trip were raced from place to place. First, to a dining facility decked out in Thanksgiving decorations to watch President Trump serve turkey to the troops; then, a hastily arranged bilateral meeting with the president of Afghanistan, who had been informed of this trip only a few hours earlier due to, once again, security concerns. At this point, the trip went from being mostly a holiday story about turkey and troops, to – in the words of another reporter - “We’re going to get some real news on this trip!”

With microphones on and shutters snapping, President Trump said, “The Taliban wants to make a deal and we are meeting with them, and we are saying there has to be a cease-fire.” It was another one of those hard-to-hear, did-he-just-say-that? moments. I followed up by asking him if this meant that the United States has officially restarted negotiations with the Taliban after he’d called the peace talks “dead” in September. The president nodded and said, “We are talking with the Taliban.” 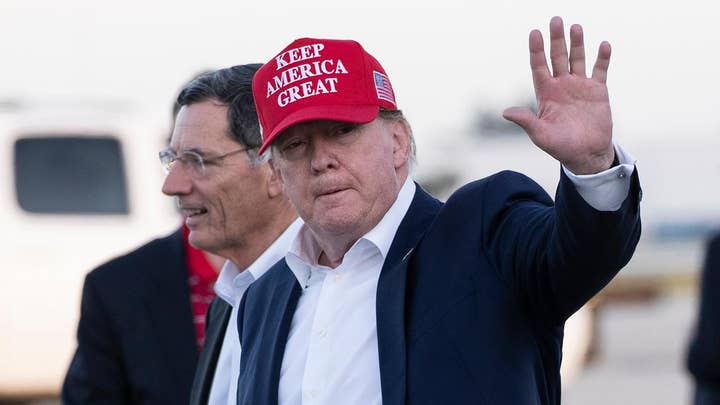 We were still scrambling to jot down all of the newsiest bits as we were handed back our cell phones and rushed to our final stop: a massive hangar filled with hundreds of troops waiting to hear President Trump deliver a Thanksgiving address. This was also the stop where the embargo would be lifted and we would be filing our reports to let the world know what President Trump had really been up to. Everything I had been writing on my laptop, and all of the video we had been shooting, hinged on our ability to connect to whatever internet the White House advance team had set up for us. There have been problems on past trips, but this time the White House went all out to establish a full filing center. And yet … when the “Go! Go! The embargo’s been lifted” moment came, I couldn’t access my email to hit send. Gmail deemed me to be suspicious and locked me out of my account.

Time slowed. My pulse quickened. Every expletive in the world was begging to be shouted. My bosses back in D.C. and I had discussed at length this very moment. Our plan was to use my personal email because my work email required a cell phone to connect, and we weren’t supposed to get our cell phones back until after … Wait!  My cell phones!  After more than 24 hours without them, I’d almost forgotten that they were back in my pocket. The ghosts glowed to life and I hit send.

At the same time, my crew, Craig Savage and Ed Lewis, two of the most experienced photographers in the business, were beginning to feed their footage and all the cable networks were taking it live. We were supposed to have a full 30 minutes to feed, but we’d already been on the ground in Afghanistan longer than the Secret Service would like. “You’ve got seven minutes!” deputy White House press secretary Judd Deere shouted to the press.

Seven minutes?! This was my only window to shoot a standup, that, 'Hey-look-at-me-I’m-on-the-ground-in-Afghanistan' moment, but we still had over 30 minutes of video left to feed. The standup was dead.

Deere, who was spending his birthday dealing with our constant demands for more time, more access, more internet, had warned us that when he said go, we had to stop our fingers and feeds and move. Air Force One was not going to wait for us. I still begged for more time. “How much time do you need?” asked Deere. As much time as you can give me. “You’ve got two minutes.”

Two minutes?! We fed as much as we could, promised to feed more as soon as possible, grabbed our gear, and ran to the plane.

We were still trying to feed as Air Force One took off. I was standing in the middle of the aisle, shouting over the engines to my desk back in D.C., and marveling that no one had told me to buckle up. Sweating through my silk shirt and dusting sawdust from somewhere off my pants, I took a second to smile at the coolest Thanksgiving Day I’ll ever have. 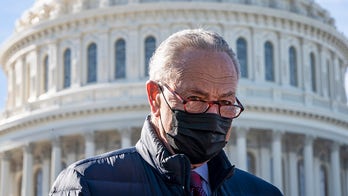