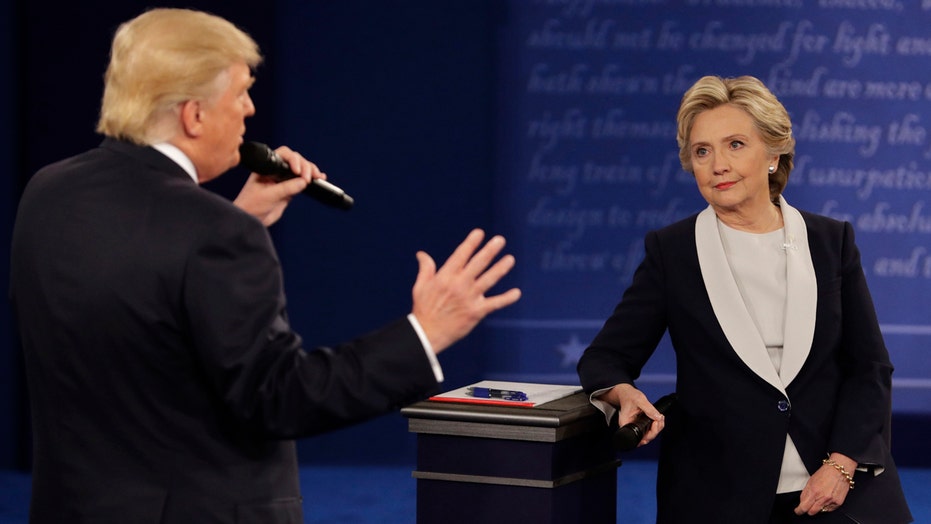 Trump's words vs. Clinton's record: How will Americans vote?

INDEPENDENTS, NOT REPUBLICANS, DECIDE ELECTIONS
Of all of the pernicious lies that have afflicted the 2016 race the worst may be that Donald Trump is losing because of a divided Republican Party.

Certainly having a full scale meltdown in your party less than a month from a quadrennial election is not a good thing. And it may, in fact, turn Trump’s impending defeat into a rout of Goldwaterian proportions. But if he loses, the root cause will be Trump’s failures outside of the Republican Party.

An astonishing 30 million or so Republicans participated in primaries and caucuses this year. As Trump often points out, he received more votes than any nominee in history. He doesn’t point out, however, that more votes were cast against him than any prior nominee.

As Trump bellows into his Twitter machine about the disloyalty of House Speaker Paul Ryan and Trump supporters go scalp hunting for conservative Republicans who have turned their backs on the party’s nominee, bear in mind this simple truth: there are more Democrats in America than there are Republicans. To win elections, the GOP needs to win a lopsided majority of independent voters. That’s just the way it is.

Coming out of the first debate, Trump was hemorrhaging support among swing voters. His feud with a former beauty queen sealed in the minds of many voters every allegation Clinton had made about Trump. That it would be followed by audio of Trump joking about sexual assault was a calamity of historic proportions.

The conservative press and the mainstream press are going to spend much of the next 20 days kindling every spark they can find of the fires of enmity in the Republican Party.

This is satisfying for both Democrats and Trump supporters. The narrative that the betrayal by the Speaker of the House or other establishment Republicans is to blame for Trump’s failures makes Trump feel better, and cheers Democrats because it is a foretaste of a permanently, hopelessly, divided opposition party in the years to come.

But do not let them fool you.

Trump supporters are threatening to abandon down-ballot Republicans who do not back Trump to the hilt. Establishmentarians and conservatives are withdrawing their support for Trump to deny him victory.

While these acts of protest no doubt satisfy the hatreds that now animate the GOP from an electoral standpoint, this is chicken feed compared to those other 40 million voters Republicans need to be a viable party.

THE RULEBOOK: ‘SUDDEN BREEZE OF PASSION’
“The republican principle demands that the deliberate sense of the community should govern the conduct of those to whom they intrust the management of their affairs; but it does not require an unqualified complaisance to every sudden breeze of passion, or to every transient impulse which the people may receive from the arts of men, who flatter their prejudices to betray their interests.”– Alexander Hamilton, Federalist No. 71

TIME OUT: HOOKED ON PHONICS
New Yorker: “Long before he tried opium, Thomas De Quincey, the English essayist, was addicted to books. The cycles of ‘remorse and deadly anxiety’ that he suffered in his adult life began when he was seven, after a kindly bookseller lent him three guineas. This, according to Frances Wilson’s new biography, ‘Guilty Thing: A Life of Thomas De Quincey’ (Farrar, Straus & Giroux), was De Quincey’s ‘earliest trespass’: a ‘mysterious (and indeed guilty) current of debt’ that he feared would carry him away.”

STATE POLLS REFLECT WIDENING NATIONAL GAP
Two new polls in Wisconsin and Virginia show a widening gap between Hillary Clinton and Donald Trump with Clinton gaining a runaway lead. In the Badger State, once thought to be a possible win for Trump, gives Clinton an 8-point advantage in a Loras College poll of the four-way race, conducted before the release of a vulgar tape of Trump making lewd comments about women and also prior to the second debate. There is some good news for the GOP, however, on the Senate level. Sen. Ron Johnson, R-Wisc., was thought to be a for sure loss when former Sen. Russ Feingold, D-Wisc., entered the race, but the two are only separated by 5 points showing Johnson may have some fighting power left before Election Day.

But Virginia, which looks less like a swing state with each poll, Clinton takes a 9-point lead in a new Roanoke College poll of the four-way race. In the two-way race, Clinton’s lead widens to 13 points. This poll was also conducted prior to both the tape and second debate.

AUDIBLE: FIRED UP, READY TO GO
“I may be limping across that finish line.” – Donald Trump at a rally Monday evening.

McConnell says don’t ask him about Trump - The Hill

FROM THE BLEACHERS
“Chris, Loved the Time Out [on Monday about Zabar’s lox cutters]! Great tidbit…reminds me of the good old days, when people gave a damn about other people and great service, not just immediate gratification! Thanks! P.S.  Keep it up, those folks who complain simply miss the point!” – Gregg Bruce, Castle Rock, Colo.

[Ed. note: The older I get, the more I prioritize good service over everything else in what I buy. The efficiency we have gained from automatic transactions is a happy respite from the deteriorating manners and skills in the mercantile world. But our technological escape comes at the cost of something I am afraid my children will never really get to know: shopkeepers who truly know and truly care about the customers they serve. And, to our Jewish readers we wish you all an easy fast.]

“You have to give Trump credit…he is doing really well considering he does not have the full support of the Republican Party that he should have.  It looks like the party is full of wimps starting with the Speaker. How well do you think Hillary would do if her party wasn’t 100% behind her? I do wish they both would act like adults and quit with the mudslinging. Don’t they realize that the people are getting very tired of it? Why is it that they can’t ignore the barbs and just stick to the issues that we are interested in? That is what we tell our children when someone is saying bad things about them, is it not?” – Bonnie S. Lee, Isanti, Minn.

[Ed. note: And if a frog had wings, he wouldn’t bump his backside when hopped. I am afraid for Republicans that they are going into battle with a force divided against itself. And it is likely too late to do much about that.]

“Back to the future? This election reminds me of the happenings surrounding Jefferson’s election…we really haven’t made much progress????” – Bill McIver, Brooksville, Fla.

[Ed. note: Certainly, the attacks on “dusky Sally” and the like made the election of 1800 no family fare, but back then the broadsides were the stuff of partisan papers circulated by mail and at taverns. Social media turned the amperage waaaay up on character assassination and political gossip. The discourse in 2016 is not just much worse, there is so much more of it. Part of this is the way in which we get our information now, but another part of it is the growing belief in both parties into the concepts: that every election could be the last one and that the role of the federal executive touches every life, every day. Most people in American probably didn’t know Jefferson had been elected until long after the Electoral College had met. And they would’ve had much less reason to care because he and the other Founders made it their business to be as irrelevant as possible when it came to the lives of ordinary Americans.]

LIVING VROOM
Fox 5: “How far would you go to protect your prized vehicle during a hurricane? While most people would choose a garage or a storage area for it, one Florida man decided to park his BMW E30 M3 in a place where he could keep an eye on it at all times – in his living room. Randy Jalil…told Jalopnik [an automotive blog] that he decided to park his BMW inside his home because he wanted to protect his other two vehicles that were in the garage. After measuring how wide his front double doors were, he found that he had plenty of room for his car. Thankfully for Jalil, he said the hurricane didn’t hit his neighborhood too badly and thanks to his ingenious thinking, his beautiful vehicle remained in pristine condition.”

AND NOW, A WORD FROM CHARLES…
“Remember, when Nixon resigned, it was not right after the Supreme Court ordered him to release the tapes. It was when Barry Goldwater and the delegation from the Congress went to Nixon and said, ‘It’s over, you’ve got to resign.’ And the next day, he announced his resignation.” – Charles Krauthammer on “Special Report with Bret Baier.”