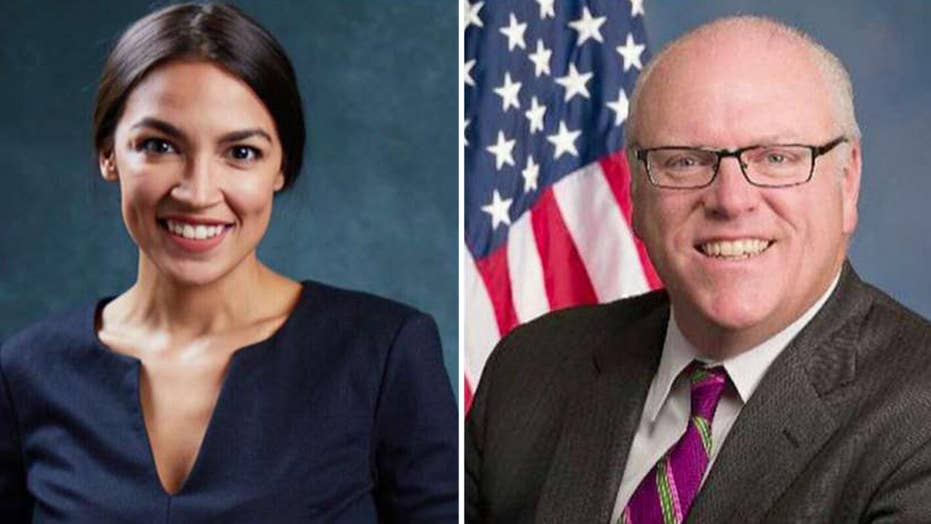 Republican strategist Ned Ryun discusses the upset and what it could mean for midterms.

The unexpected victory of political newcomer Alexandria Ocasio-Cortez over 10-term Rep. Joe Crowley – seen as a likely successor to House minority leader Nancy Pelosi – in the New York congressional Democratic primary has focused attention on more than the weariness among many liberals over establishment Democrats.

Ocasio-Cortez is a self-styled socialist and proudly wore the label as she ran her grassroots campaign, promising to fight for free college education, a $15 federal minimum wage, an expansion of the Medicare program to include people of all ages, a universal jobs guarantee and abolititon of the country’s immigration law enforcement agency.

But while Ocasio-Cortez’s victory drew headlines from coast to coast, it was in fact the latest of recent primary wins by Democratic Socialists. Just days before, four candidates backed by the Democratic Socialists of America (DSA) won primary elections for legislative seats in Pennsylvania.

Their victories have brought visibility to a growing appeal of socialism, which long carried a stigma, among many younger Americans turning their backs on establishment politics.

They view socialism as a more intense form of resistance against Trump policies as well as entrenched Democratic Party leaders such as Pelosi.

These Democratic Socialists, as they are known, are evoking comparisons to Tea Party Republicans who rose against President Barack Obama and the Watergate babies elected after President Richard Nixon.

“The community is ready for a movement of economic and social justice,” Ocasio-Cortez told reporters. “That is what we tried to deliver.”

Buoyed by the victories of young socialist candidates in Pennsylvania, Arielle Cohen, co-chairperson of a local DSA chapter, told The Huffington Post that momentum was on the side of ultra-left liberals.

"We won on popular demands that were deemed impossible. We won on health care for all, we won on free education,” she said.“We’re turning the state the right shade of red tonight.”

Critics, as well as many scholars, say many of the younger people supporting Democratic Socialism have no memory of failed socialist systems, in which they might find cautionary tales.

“What a 28-year-old American with very little international experience sees as socialism is really utopianism,” said Otto J. Reich, a former U.S. ambassador to Venezuela and assistant secretary of state for Western Hemisphere Affairs. “This woman is ignorant. Socialism offers simple answers, and offers great things, but who is going to pay for these things, like a free college education?”

What a 28-year-old American with very little international experience sees as socialism is really utopianism...Socialism offers simple answers, and offers great things, but who is going to pay for these things, like a free college education?

Ocasio-Cortez, who was approached by presidential candidate Bernie Sanders' supporters about running for the congressional seat, received endorsements from national groups including Black Lives Caucus, MoveOn and Democratic Socialists of America.

The DSA did not respond to Fox News' requests for comments.

The DSA, of which Ocasio-Cortez is a member, is the largest socialist organization in this country. On its website, DSA says it is working within the Democratic Party -- for now, it emphasizes -- depicting it is as the most feasible way to penetrate the political corridors of power.

“We are not a separate party. … Many of us have been active in the Democratic Party,” the organization says, adding that its members join groups that fight for labor unions, gay rights, civil rights, among other causes. “We work with those movements to strengthen the party’s left wing, represented by the Congressional Progressive Caucus.”

“The process and structure of American elections seriously hurts third-party efforts,” the organization says. “We hope that at some point in the future, in coalition with our allies, an alternative national party will be viable. For now, we will continue to support progressives who have a real chance at winning elections, which usually means left-wing Democrats.”

The DSA got a boost in 2016, when Sen. Sanders, of Vermont, ran for president in the Democratic primaries and touted Democratic Socialism. Sanders said he was a Democratic Socialist in the spirit of Frankiln D. Roosevelt, Lyndon B. Johnson and Martin Luther King Jr.

DSA membership has soared more than five-fold since Sanders’ campaign, for which Ocasio-Cortez worked, excited young voters who saw Hillary Clinton as more of the same and who were loath to vote Republican.

DSA has 37,000 members, a remarkable jump from just 7,000 in 2016. Some surveys in recent years have showed that more than half of Democrats between the ages of 18 and 34 have positive views of socialism.

Pelosi has been dismissive of questions about whether establishment Democrats are under threat by an almost left-of-left faction of the party.

We won on popular demands that were deemed impossible. We won on health care for all, we won on free education. We’re turning the state the right shade of red tonight.

— Arielle Cohen, co-chair of a local Pennsylvania chapter of Democratic Socialists of America

"Nobody’s district is representative of somebody else’s district," she said, according to published reports. "It should not be viewed as something that stands for everything else."

But many experts, mindful of how polls and media have missed shifts in sensibilities among U.S. voters, particularly in recent years, leading to “surprise” results, say that the socialist fervor needs to be taken seriously.

“We have to take Ocasio and others seriously,” Reich told Fox News. “You can’t dismiss them.”

Socialist efforts have had some success in certain aspects in Europe, but in Latin America, which embraced it for years as an antidote to government corruption and economic struggles, it has upended life for the worse in many countries, prompting people to flee to the United States and other nations.

“None of them implemented socialism in way that actually adhered to tenets because, in general, leaders become corrupt by power,” said Jason Marczak, a fellow at the Atlantic Council who specializes in Latin America. “Venezuela is not socialist; it’s a dictatorship.”

Reich argues that Venezuela, Cuba and Nicaragua, to name a few countries, did start out with revolutionary-minded leaders who described themselves as socialist and who pledged to drive out government corruption, distribute financial resources and broaden access to social programs.

Instead, Reich said, the leaders mismanaged the government, making life more difficult and sending economies into downward spirals. Venezuela and Nicaragua have been rocked by protests and violent crackdowns by the governments.

“In this part of the world, socialism has been a euphemism for Marxist economic policies, which have been synonymous with economic failures, social repression and mass out-migration of people,” Reich said.

Venezuela, once prosperous though mired in corruption, now ranks as one of the most high-crime nations in the world and has the highest inflation rate.

"Venezuelans are eating out of garbage cans now," Reich said. “People become very unhappy, that becomes a threat and at the first sign of protest against the government, the government represses and there’s violence.”

But would that happen here?

The DSA argues that socialism is more than what its critics portray.

“We can learn from the comprehensive welfare state maintained by the Swedes, from Canada’s national health care system, France’s nationwide childcare program, and Nicaragua’s literacy programs,” its website says. “Lastly, we can learn from efforts initiated right here in the US, such as the community health centers created by the government in the 1960s. They provided high quality family care, with community involvement in decision-making.”

Some experts say the mayhem that has resulted from socialist systems in Latin America can’t happen in the U.S. because it has a powerful system of checks and balances, and strong political and civic institutions.

Cynthia J. Arnson, the director of the Latin American program at the Woodrow Wilson International Center for Scholars, said, “A lot of it in Latin America has to do with weak institutions. The U.S. has 200-plus years of democratic institutionality, which is by no means without weaknesses, but no Latin American country can compare to our level of institutional development.”

Reich conceded that the U.S. has a much more robust political and civic infrastructure but said that Germany and Italy also had strong foundations before their leaders turned autocratic and their societies collapsed.

Giancarlo Sopo, a Democratic communications consultant on Latin America, said that many who describe themselves as socialist don’t fully understand socialism or its different variations.

“Democratic Socialists argue that … the government should own or ‘socialize’ private businesses,” Sopo said. “This invariably leads to societies that look more like Caracas than Copenhagen. Unfortunately, many Americans are being bait-and-switched into supporting the former, thinking it’s the latter.”

"While I agree we must do more to help the poor and working class," Sopo said, "the way to lift up families is by investing in them, lending a helping hand when they fall on hard times, and creating opportunities for growth — not by nationalizing Apple and Microsoft."