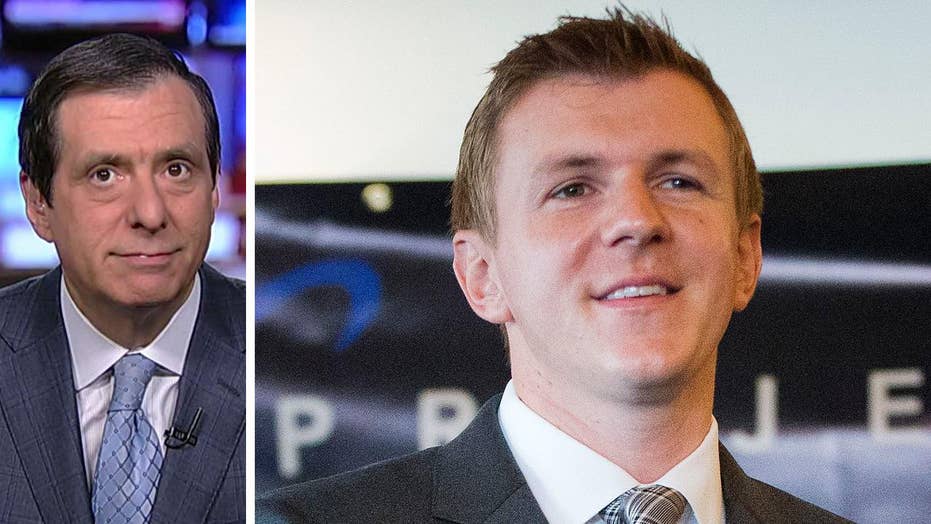 Kurtz: Getting stung while stinging the media

'MediaBuzz' host Howard Kurtz weighs in on how the Washington Post exposed an effort by James O'Keefe and Project Veritas to peddle phony allegations against Roy Moore.

In one instance, at least, the war on the media has backfired spectacularly.

An effort to entrap the Washington Post into publishing bogus allegations against Roy Moore instead wound up highlighting the paper’s careful reporting—and the willingness of a conservative activist to use lies about statutory rape and abortion.

Post reporters turned the tables on Project Veritas, headed by James O’Keefe, by refusing to fall for its latest sting, which involved having a woman pose as someone who had been sexually victimized by Moore, the Republican Senate nominee in Alabama. The woman, Jaime T. Phillips, claimed in a series of interviews that she had a sexual relationship with the former judge when she was 15, that he impregnated her, and that he drove her to have an abortion.

“During the interviews,” the paper said in a story posted last night, “she repeatedly pressed Post reporters to give their opinions on the effects that her claims could have on Moore’s candidacy if she went public.” This, of course, was an effort to surreptitiously videotape politically biased comments, which is O’Keefe’s trademark.

One interesting twist is that the Post decided to breach its off-the-record agreement with Phillips after confirming that she had lied.

“We always honor ‘off-the-record’ agreements when they’re entered into in good faith,” Executive Editor Martin Baron was quoted as saying. “But this so-called off-the-record conversation was the essence of a scheme to deceive and embarrass us. The intent by Project Veritas clearly was to publicize the conversation if we fell for the trap. Because of our customary journalistic rigor, we weren’t fooled, and we can’t honor an ‘off-the-record’ agreement that was solicited in maliciously bad faith.”

Media executives and experts generally agree that a person who lies forfeits the protection of an off-the-record agreement.

It was the Post which first interviewed four women, on the record, who say that Moore made unwanted advances when they were teenagers nearly four decades ago—including one, Leigh Corfman, who said Moore sexually accosted her when she was 14.

Moore has vehemently denied the allegations by those women and five others, and he and his campaign have repeatedly targeted the Post and “liberal media lapdogs.” Two of the accusers spoke to Alabama reporters, and another held a news conference.

An unknown supporter of Moore recently tried to discredit the paper by making a robocall in which someone falsely claiming to be Post reporter “Bernie Bernstein” offers cash in exchange for dirt on the candidate. The paper, like most news organizations, has a strict policy against paying for information.

Phillips repeatedly asked Post reporter Beth Reinhard to guarantee that Moore would lose the Senate race if her story was published, but Reinhard said she could not predict the impact. Reinhard wrote to her that “I’m so sorry but I want to be straight with you about the fact-checking process and the fact that we can’t guarantee what will happen as a result of another story.”

The Post, while asking Phillips for documents and corroboration, uncovered discrepancies in her account, including a GoFundMe page in which she said would be joining the conservative media movement. Phillips agreed to meet with another of the paper’s reporters, Stephanie McCrummen, who told her she was being videotaped and brought up the page she had posted.

“It says that you’re moving to New York, and you’ve accepted a job to work in the conservative media movement to combat the lies and deceit of the liberal MSM,” McCrummen said.

“I was looking to take a job last summer and to be in New York, but it fell through,” Phillips replied. She then claimed she had interviewed for a job with the Daily Caller, but the website said no one there had talked to her.

On Monday morning, Post reporters saw Phillips walk into the New York offices of Project Veritas. O’Keefe declined to answer questions, telling them: “I am not doing an interview right now, so I’m not going to say a word.”

In the end, O’Keefe’s organization wound up showing that the Post was cautious in dealing with an orchestrated attempt to peddle lies about a candidate.

Project Veritas responded today by posting an undercover video of Post national security reporter Dan Lamothe. He said the paper doesn’t like President Trump but made this distinction:

“There’s the news side that’s just trying to critically call bull—when there’s bull—but also give him credit when there’s credit, you know? When something is good, and he’s doing some things bad, but he’s doing some of the things good.” He distinguished the newsroom’s efforts from the editorials, the paper’s “institutional voice,” which he said have “become quite critical.”