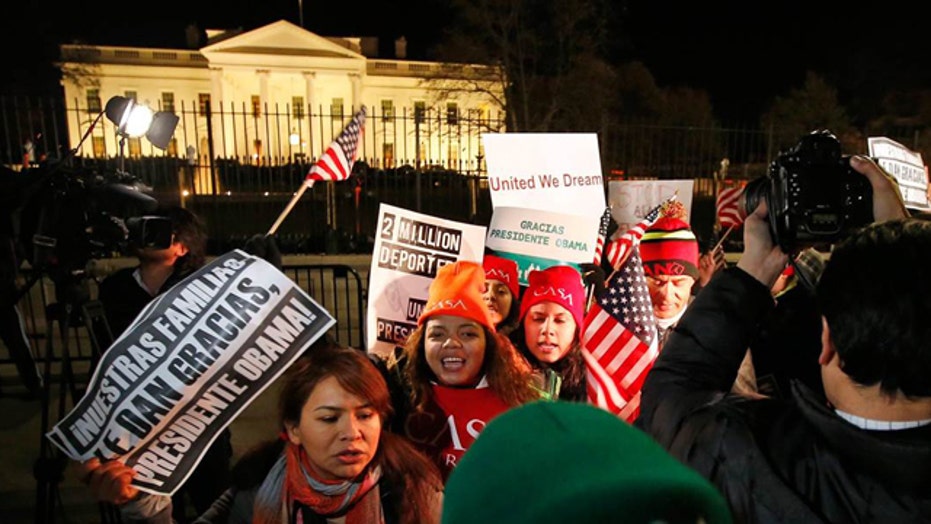 Rep. Luis Gutierrez on if Obama's immigration plan is legal

House Republicans voted Thursday to block President Obama's immigration executive actions, though it was unclear whether the largely symbolic step would be enough to prevent a risky budget stand-off next week.

The House voted 219-197 for the bill, by Rep. Ted Yoho, R-Fla., that declares Obama's actions "null and void and without legal effect."

The legislation is part of a three-step plan by House GOP leaders to both address Obama's immigration maneuvers and approve a new spending bill to avert a partial government shutdown. Next week, the chamber is set to vote on a bill funding most of the government through fiscal 2015, and the Department of Homeland Security through early next year. That would tee up a new fight over funding for Obama's immigration policies when Republicans control both chambers.

However, many conservative lawmakers want to wage that battle now, and use the looming Dec. 11 deadline -- when current government funding expires -- as leverage to defund the immigration plan.

They worry Yoho's legislation is an ineffective tool for doing that, as the stand-alone bill approved Thursday stands little chance of passing the Senate. The White House also has issued a veto threat, calling the bill "non-sensical."

"I'm not happy," Rep. Mick Mulvaney, R-S.C., said. He said he's concerned that if Republicans don't fight the immigration policy now, it could send the wrong signal ahead of the new Congress.

Conservative sources indicate there are between 30 and 40, or more, conservatives who would bolt on any spending bill next week.

"There's a higher risk of more [members] bolting," said one source. "Let us sort of vent. I don't think [GOP leaders] thought this was going to be as big an issue."

But despite that concern, one source said GOP leaders think would-be defectors will come back to favor the plan at the end.

Asked if he was concerned that opposition could torpedo the spending bill, House Appropriations Committee Chairman Hal Rogers, R-Ky., said: "I don't think so. I'm hearing good things about it."

Still, House Speaker John Boehner might need Democratic support to carry the spending package across the finish line next week.

House Democratic Leader Nancy Pelosi, who had been coy about whether she'd help pass a spending plan, said Thursday she's reached out to Boehner to extend a "hand of friendship" to keep the government open -- as long as Democrats see a bill they can support.

It's unclear whether the legislation in the works meets that criteria. She indicated Thursday that Democrats might make demands if Boehner needs their help.

"If he has 218 votes, there's no conversation. If he doesn't, we have leverage," Pelosi said.

At a press conference earlier Thursday, Boehner urged his rank-and-file to be patient, making the case for delaying the immigration fight until next year.

"Come January, we'll have a Republican House and Republican Senate, and we'll be in a stronger position to take actions," he said.

Boehner said the current plan is "the most practical way to fight the president's action."

Obama's executive actions would defer deportations and grant work permits to up to 5 million illegal immigrants.