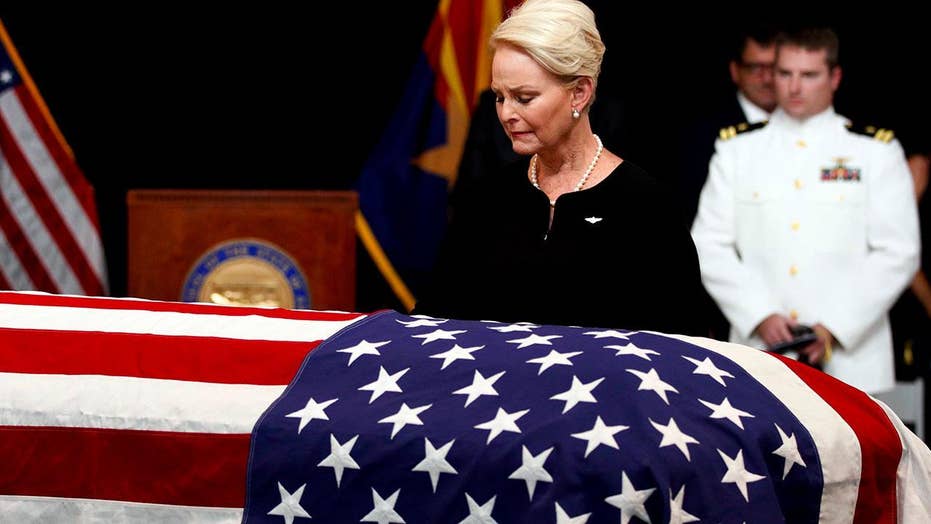 Memorial for John McCain moves from Arizona to Washington

After an emotional memorial service for at a church in Phoenix, John McCain's body returned to the Washington, D.C. area for the final time, when Air Force Two landed at Joint Base Andrews in Maryland.

Plenty of lawmakers, government officials and other dignitaries will circulate through the U.S. Capitol to pay their respects to the late Arizona Republican Sen. John McCain as he lies in state in the Rotunda.

But there will be plenty of ordinary Americans, too.

That’s because the man who designed the Capitol wanted it that way.

The House and Senate chambers are for the legislators. But neoclassical British architect Benjamin Latrobe decided the Rotunda is for the people.

Discussion about the use of each room in the Capitol dates back to George Washington and Thomas Jefferson. Usage of the House and Senate were self-explanatory. But in 1806, there was a lot of conversation between Jefferson and Latrobe about how to use the middle of the Capitol.

The blueprints focused on creating a grand entrance to the building in the center. Jefferson and Latrobe thought that this expanse in the middle should be a place for the public to assemble. Its use as an ornate vestibule for those going to the House and Senate was secondary. 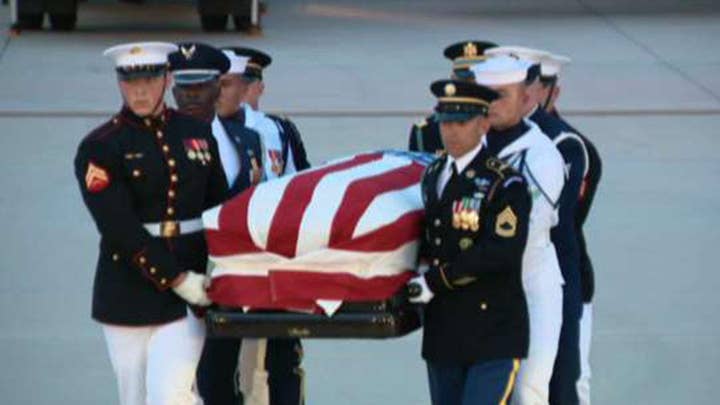 The Rotunda may mimic the interior of the Pantheon in Rome. But in his plans, Latrobe labeled the Rotunda: “the hall of the people.”

And that’s where “the people” will come to honor McCain.

Early on, there was talk about using the Rotunda for Joint Sessions of Congress. But those never materialized back then. Construction of the Rotunda began in 1818. Congress first used the Rotunda for a ceremony in 1824 to honor Marquis de Lafayette, a key figure in both the American and French Revolutions.

That set the precedent for how the young nation viewed the Rotunda space. It was a crossroads for the House and Senate, and thus the nation. It wasn’t a room for the fray of politics and policy disputes. The Rotunda was a place where the nation’s people would assemble together, checking their differences at the door.

There’s a reason the Rotunda is round. A circle is the symbol of equality.

A ceremony for McCain to lie in state is precisely the type of event Latrobe had in mind for the Capitol Rotunda: a place to mourn some of the nation’s most-eminent citizens. 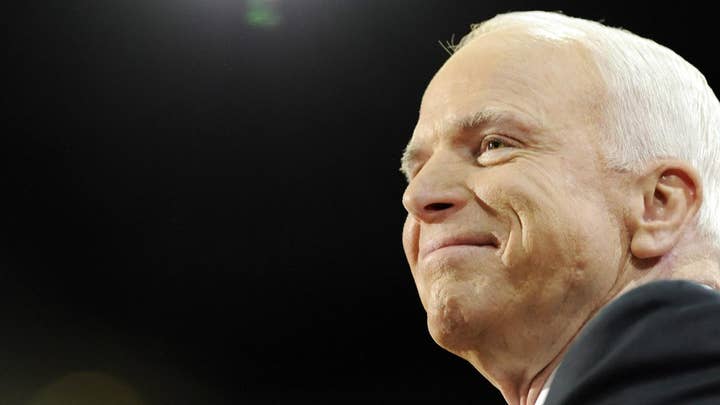 Pierre L’Enfant composed the master plan for Washington, D.C. L’Enfant died with $46 to his name, and a few pocket watches in 1825. L’Enfant initially was buried in Chillum, Maryland, just outside the city he designed. But they exhumed L’Enfant in 1909. Congress honored L’Enfant by lying his remains in state in the Rotunda. They reburied L’Enfant on a hill at Arlington National Cemetery, overlooking the capital city.

McCain’s casket will rest atop the wooden catafalque, a platform constructed for Lincoln’s funeral. It’s pronounced KATT-uh-falk. They used to store the catafalque in the tomb located two floors immediately below the Rotunda. That’s where they initially intended to bury George Washington. But Washington is interred at Mount Vernon. The catafalque is now on display in the Capitol Visitors Center.

Four persons have lain “in honor,” one level below “in state.” U.S. Capitol Police Officer Jacob Chestnut and Detective John Gibson, civil rights pioneer Rosa Parks and, just this past February, Rev. Billy Graham. The ceremony for lying “in honor” looks a lot like the one for lying in state. For Graham, they used a replica catafalque, which is now kept in Washington’s tomb at the Capitol.

The catafalque is the wooden platform used for President Abraham Lincoln’s funeral, which is where Sen. John McCain’s casket will rest Friday and early Saturday. (Fox News)

No African-Americans have lain in state. Just Chestnut and Parks “in honor.” Parks is the only woman to lie in state or honor.

We expect immense crowds to file into the Capitol for McCain’s services when the building opens to the public Friday afternoon. The lines for President Herbert Hoover’s service in the Capitol when he lay in state in 1964 were rather short. By contrast, they kept the Capitol open for 24 hours when Rosa Parks lay in honor in 2005.

Parks’ ceremony was different than most. A city bus, similar to the one in Montgomery, Alabama, on which Parks refused to sit in the “colored section,” transported her remains to the Capitol.

President Gerald Ford was the last chief executive to lie in state in the Rotunda in late 2006/early 2007. Some 57,000 people filed past Ford’s coffin in the Rotunda.

Security officials scrambled jet fighters when air traffic controllers lost contact with a Kentucky State Police plane carrying then-Kentucky Republican Gov. Ernie Fletcher to President Ronald Reagan’s ceremony at the Capitol in June 2004. The incident forced the evacuation of the Capitol complex as they awaited a horse-drawn caisson to bring Reagan’s body to the Capitol for him to lie in state.

Reagan’s body was viewed by 105,000 people, twice as many as those who came to honor Ford.

Hawaii Democrat Sen. Daniel Inouye was the last person to lie in state in December 2012. Inouye lost his arm during World War II, just across a hillside in Italy where Senate Majority Leader Bob Dole also was wounded. The Kansas Republican came to the Rotunda to pay his respects to Inouye as his fallen colleague lay in state. The two bonded over politics as they convalesced in a Michigan hospital during WWII.

When Dole approached the Rotunda, he ditched his wheelchair. With the assistance of his wife, former North Carolina Republican Sen. Elizabeth Dole and current Senate Majority Leader Mitch McConnell, Dole shuffled toward Inouye’s casket in the middle of the Rotunda. Dole shed a tear and touched the casket of his friend. Dole said he got up, and walked because “I wouldn’t want Dan to see me in a wheelchair.”

A couple of presidents have not lain in state over the years. President Harry Truman didn’t like ceremonies and even turned down the Congressional Gold Medal. The family of President Richard Nixon also rejected the honor out of concern some visitors to the Rotunda might not be respectful. 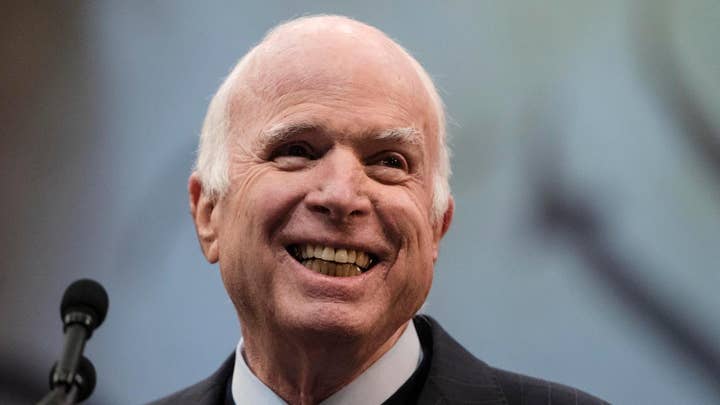 Dozens of House and Senate members will gather Friday in the Rotunda to honor McCain. Vice President Mike Pence, McConnell and House Speaker Paul Ryan will deliver remarks. Other Congressional leaders will lay a wreath.

The dignitaries and lawmakers will depart after the ceremony. But the public will come to say goodbye to McCain in the afternoon. Thousands will queue on the west front of the Capitol in the summertime heat for the opportunity to spend just a few seconds walking past the casket of John Sidney McCain.

After all, this is the type of thing Latrobe envisioned for the Rotunda. The House and Senate chambers are for the lawmakers. But the Rotunda is hall of the people.