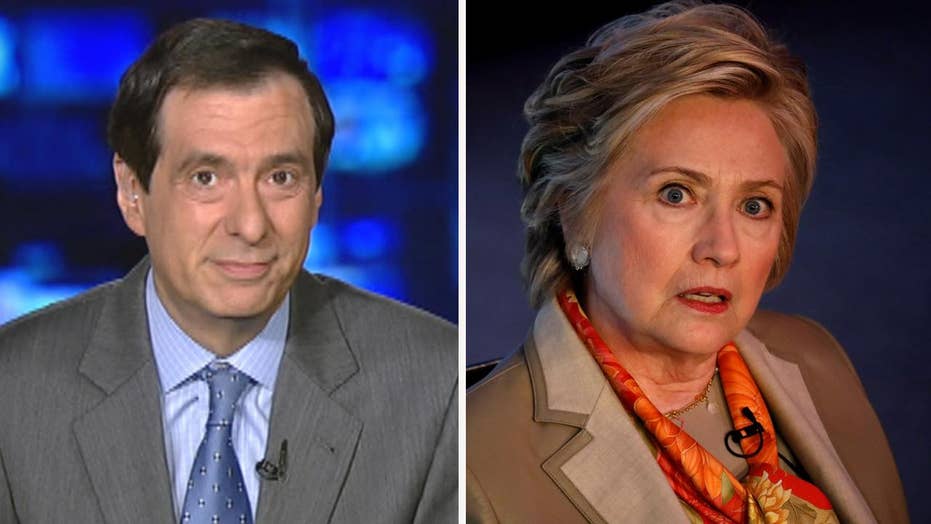 Kurtz: Clinton puzzled by anger aimed at her

Hillary Clinton, who seemed to point fingers at just about everyone else for her election loss, is now taking some of the blame herself.

But she still has plenty to spread around.

Her targets include Bernie Sanders, James Comey and the New York Times. And she also takes a swipe at Joe Biden.

All this is based on Clinton’s forthcoming book, “What Happened,” an advance copy of which was obtained by CNN.

The notion of the book itself is a bit strange. I can’t think of another example of a losing presidential candidate coming out with a campaign book less than a year after the election.

Of course, Hillary has been a celebrity since her days as first lady, and she did win the popular vote. Maybe she feels compelled to explain to her supporters how she blew the election against Donald Trump.

She writes: "I go back over my own shortcomings and the mistakes we made. I take responsibility for all of them. You can blame the data, blame the message, blame anything you want--but I was the candidate. It was my campaign. Those were my decisions.”

And Clinton admits she missed the moment: “I was running a traditional presidential campaign with carefully thought-out policies and painstakingly built coalitions, while Trump was running a reality TV show that expertly and relentlessly stoked Americans' anger and resentment.”

Based on the CNN report, Clinton neatly ticks off some of her mistakes. Delivering paid speeches to Wall Street banks? “Bad optics.” Using a private email server while at the State Department? “Dumb.”

You may recall that it took many weeks for her to admit that it was even a mistake. And in the book she slams the Times, which broke the story, for the way it covered her email scandal.

Clinton unloads on Sanders, saying that because they had few policy differences “he had to resort to innuendo and impugning my character.” She says Bernie caused her campaign “lasting damage” and paved the way for Trump assailing her as “crooked.”

But wait a minute. Don’t we all remember Sanders saying he didn’t give a damn about her emails? A more ruthless opponent would have hammered her day and night. She had trouble beating a gadfly senator who wasn’t even a Democrat.

Biden has been saying that Clinton didn’t focus enough on the middle class, so she says this about the former vice president: “I find this fairly remarkable, considering that Joe himself campaigned for me all over the Midwest and talked plenty about the middle class.” But she was the candidate who didn’t bother to campaign in Wisconsin, and Biden just a surrogate.

Clinton reprises her criticism of Comey as a “rash FBI director” whose last-minute reopening of the email probe may have cost her the election.

There are some candid passages about her husband, whose affair with Monica Lewinsky essentially helped launch her Senate candidacy. Hillary says she knows many people assume her union with Bill is just “on paper.” She writes:

“There were times that I was deeply unsure about whether our marriage could or should survive. But on those days, I asked myself the questions that mattered to me: Do I still love him? And can I still be in this marriage without becoming unrecognizable to myself--twisted by anger, resentment, or remoteness? The answers were always yes.”

Finally, there is this bit of soul-searching: “What makes me such a lightning rod for fury? I'm really asking. I'm at a loss.” Her conclusion: “I think it's partly because I'm a woman.”

Critics will undoubtedly accuse her of playing the sexism card, but a better candidate might have overcome the skepticism of some voters.

Does any of this matter now? Hillary Clinton’s political career is over. She’s not the person to galvanize the Democratic resistance to Trump as the party searches for younger leaders. So at this point she’s writing for history—and perhaps therapy.