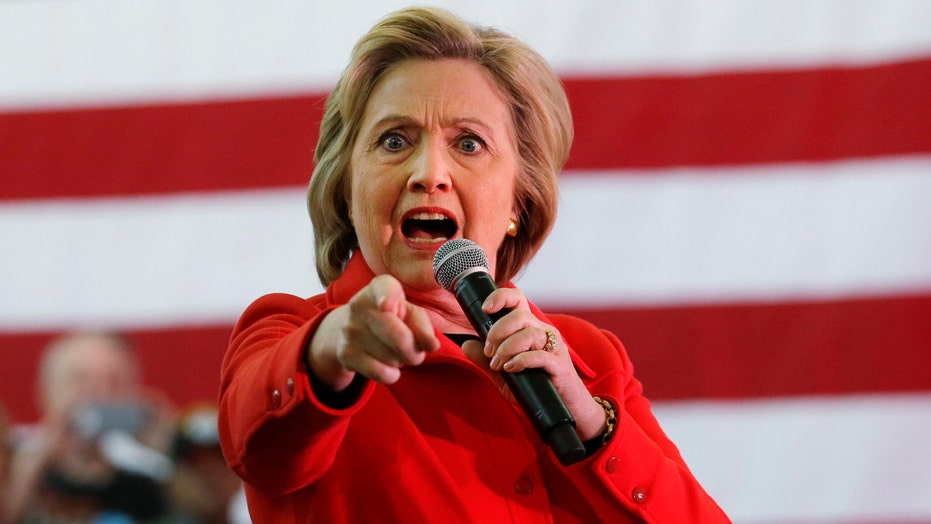 Clinton's animal impression occurred during a rally in Nevada

Speaking before a crowd in Reno, Clinton described how she would like to fact-check various Republican claims. He began her story with a recollection of a political ad that aired on the radio in Arkansas. The ad featured a dog that the announcer claimed would bark any time a candidate said an untrue statement.

"We need to get that dog and follow him around and every time they say these things, like, 'oh the Great Recession was caused by too much regulation," Clinton said before yelping, "Arf! Arf! Arf! Arf!" to general applause.

Clinton and her opponent, Vermont Sen. Bernie Sanders, have criss-crossed the Silver State in recent days. On Sunday, they wound up at opposite ends of a pew in the same Las Vegas church.

Sanders' ground game is catching up to the Clinton machine as well. The so-called Democratic socialist's campaign has over 100 staffers on the ground and has more than doubled its paid staff here since last month, along with spending double on his television spots compared to Clinton - $2.93 million to Clinton’s $1.46 million.

Adding to the uncertainty is a relative lack of polling coupled with a sense of the momentum being behind Sanders in the wake of his thumping victory over Clinton in last week's New Hampshire primary. Showing the importance her team has placed on Saturday's caucuses, Clinton skipped a campaign event in Florida, sending her husband, former President Bill Clinton, to stump in her stead.

As in Iowa and New Hampshire, Sanders has publicly pinned his hopes in Nevada to voter turnout. "Everything in my political gut tells me that we have the momentum here in this state," he told a rally in Las Vegas Sunday, "and if people come out in large numbers on caucus day, we’re going to win."

It is possible to win the Nevada caucuses, but lose the all-important battle for Democratic National Convention delegates. That's exactly what happened to Clinton in 2008 against then-Senator Barack Obama.

The Clinton campaign may not have helped its cause in Nevada with comments made last week by campaign spokesman Brian Fallon in which he compared Nevada to the more racially and ethnically homogenous Iowa and New Hampshire.

"There’s an important Hispanic element to the Democratic caucus in Nevada," Fallon said. "But it’s still a state that is 80 percent white voters. You have a caucus-style format, and [Sanders will] have the momentum coming out of New Hampshire presumably, so there’s a lot of reasons he should do well."

That remark reportedly angered allies of Senate Minority Leader Harry Reid, with one telling Politico that Reid had "pushed hard to move Nevada near the front of the primary calendar precisely because of its diversity."