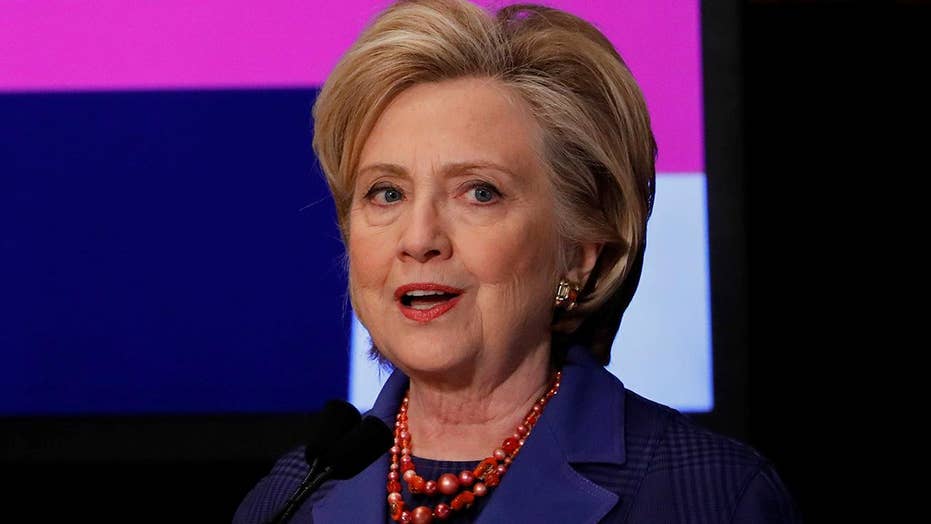 Hillary Clinton: No one tells a woman to go away

Hillary Clinton has ramped up her efforts to influence the Democratic Party and its voters in upcoming midterm elections, a move that some say only hands ammunition to Republican candidates.

Many thought Clinton's 2016 presidential election defeat -- which followed a failed 2008 primary campaign -- would end her political life. But the subsequent tour for the book "What Happened" has helped keep the former U.S. secretary of state visible despite her devastating loss to Donald Trump.

On Monday, Clinton activated her political machine, attending a gathering of nearly a dozen progressive groups supported by Onward Together, the post-election political organization she founded that's aimed at “advancing the progressive vision that earned nearly 66 million votes in the last election.”

"So I feel as strongly today as I ever have that we all have to stand up and defend our country, and most importantly, our democracy.”

“I don’t want to see us go backwards,” Clinton told Bustle. “But organized interests fueled by ideology and huge amounts of money are trying to take us backwards. So I feel as strongly today as I ever have that we all have to stand up and defend our country, and most importantly, our democracy.”

The Clinton family also plans to restart fundraising efforts for the Clinton Foundation, which is being investigated for “pay to play” politics while Clinton headed the State Department (2009-13), inviting people to a benefit event on May 24 in New York, according to Axios. The price for attending ranges from $2,500 for a cocktail party and dinner – up to $100,000 for a special reception.

Her return to political life comes ahead of midterm elections this November, where energized Democratic voters hope to take back some control in Washington, D.C., following nearly two years of the contentious Trump presidency.

“Just as I’m working here today to try to make sure we’re prepared to do everything we can in November, there are thousands of people on the other side who are doing the same,” Clinton told Bustle. “Even though I think the energy is on our side, we have to translate that into a very strong electoral strategy.”

Clinton’s political organization boasts of giving over $1 million in grants in its first year to left-wing groups. The disclosed financial records show the organization raised only $115,000 in the last year, but because it’s registered as a nonprofit social welfare organization, the actual money raised and the identities of the donors do not have to be disclosed.

Among the groups that it gave money, according to the outlet, is Indivisible – a group that sent liberal activists to Republican town halls last year.

The Republicans, meanwhile, knowing that Clinton remains the most unpopular high-profile Democrat in the country, second only to House Minority leader Nancy Pelosi, have decided to make Clinton a target during the midterm elections.

Remarks by Clinton have already forced some Democrats to disassociate from her. U.S. Sen. Claire McCaskill, D-Mo., slammed the former candidate for saying that voters in America’s heartland backed Trump for president because they wanted to move the country “backward.”

"For those of us that are in states that Trump won, we would really appreciate if she would be more careful and show respect to every American voter and not just the ones who voted for her," McCaskill said.

In North Dakota, Democratic Sen. Heidi Heitkamp, who faces a tough re-election fight in November, was asked in March in a radio interview when Clinton would “ride off into the sunset.”