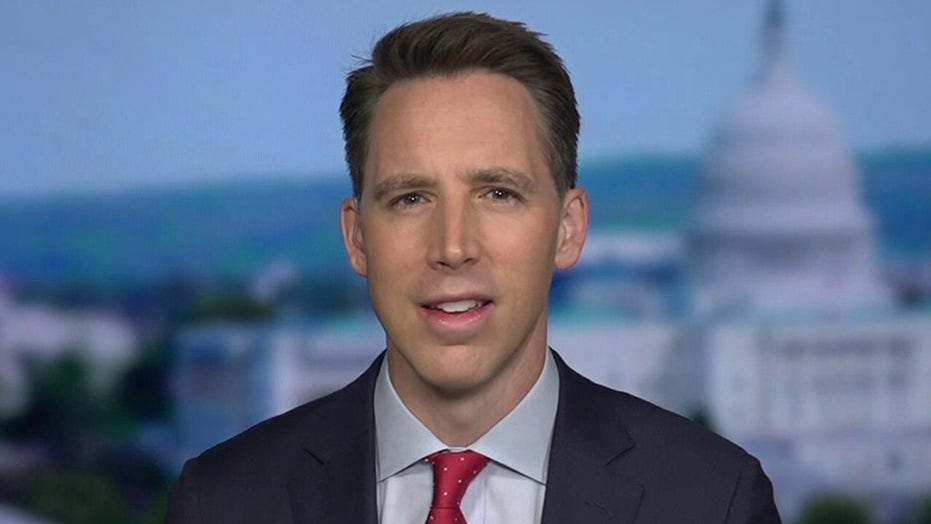 Missouri GOP Sen. Josh Hawley reacts to criminal charges being filed against the McCloskeys and discusses his new legislation to crack down on China.

Sen. Josh Hawley, R-Mo., accused major corporations such as Nike and the NBA, and those who profit off their endorsements such as LeBron James, of profiting off slave labor in China, after he introduced a bill to hold businesses accountable for having slave labor in their supply chain.

Hawley said on Fox News Tuesday that the NBA was a “classic” example, and that all of their Nike uniforms are made with forced labor in China’s Uyghur concentration camps.

“I would challenge the NBA, Adam Silver, all the endorsers of Nike products like LeBron to take a pledge that they will be slave free, that they will not use in their product lines slave labor,” Hawley said.

He challenged all corporate leaders to take a “#slavefree” pledge, saying if they cannot take it, “they need to drop the product line.”

“Corporate America and the celebrities that hawk their products have been playing this game for a long time – talk up corporate social responsibility and social justice at home while making millions of dollars off the slave labor that assembles their products,” the Missouri Republican said in a statement. “Executives build woke, progressive brands for American consumers, but happily outsource labor to Chinese concentration camps, all just to save a few bucks.”

Last week Hawley blasted the NBA for pulling custom gear from its online store following the backlash the league received for blocking "Free Hong Kong" to be printed on its apparel.

On Monday of last week, the NBA was swept into controversy after a viral video showed that the online store could not process orders that used the text "FreeHongKong." Hours later, the store's operator Fanatics reversed what it suggested was a technical error that prompted the phrase to be "inadvertently prohibited."

However, days after the incident, customers cannot find customizable apparel on both Fanatics and the NBA's online store. And returning to pages of specific jerseys showed that the products had been "discontinued."

The subject of the NBA's relationship to China was renewed last week after Adrian Wojnarowski, who covers the NBA for ESPEN, sent Hawley a profane response to the lawmaker's criticism of the league's decision of “pre-approved, social justice slogans” while “censoring support” for law enforcement and criticism of the Chinese Communist Party.

Wojnarowski apologized to Hawley, and ESPN later suspended the reporter.

Nike has long been accused of profiting off forced labor through the independent contractors that make its products overseas. On Tuesday President Trump sanctioned 11 Chinese firms over their use of forced labor and other forms of repression against the Uighur Muslims, an ethnic minority in China. Among the companies was Nanjing Synergy Textiles Co. Ltd., which is owned by Victory City International Holding Ltd., a company that supplies Nike, among a number of other American companies.

In February of this year, The Washington Post reported that Qingdao Taekwang Shoes Co., a supplier of Nike for more than 30 years and one of the brand’s largest factories – it pushes out around 8 million pairs of Nikes each year – was found to be using ethnic Uighurs from China’s western Xinjiang region, forcing them to toil away in the factory hundreds of miles from their home.

Nike’s website has a statement on forced labor in its supply chain: “Our sourcing strategy prioritizes and favors suppliers that show demonstrable leadership in corporate responsibility and sustainability, seeking to move beyond minimum standards. As part of our growth strategy, we seek suppliers who drive sustainable business growth by minimizing their environmental impacts, fostering a strong culture of safety and developing an engaged and valued workforce.”

“Nike continually evaluates and updates its systems to identify and address risks in its supply chain, including those related to slavery and human trafficking,” the statement continues.