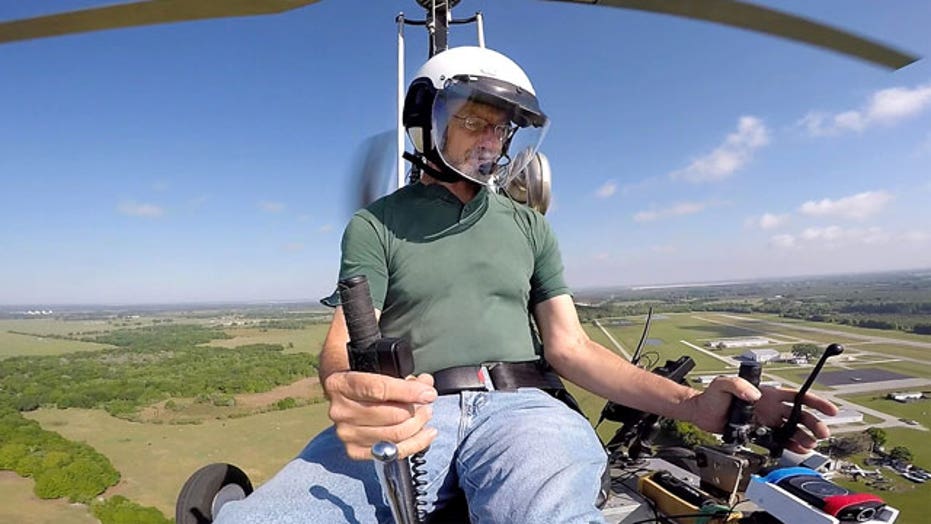 Could face up to four years in prison

The 61-year-old Florida postal worker who landed a gyrocopter on the grounds of the US Capitol on Wednesday -- claiming he was delivering protest letters to Congress -- was charged Thursday in federal court and released pending trial next month.

Doug Hughes was ordered into home detention and is subject to GPS monitoring after being arraigned on two charges of violating national defense air space and operating an unregistered aircraft.

The charges could land Hughes in prison for four years.

He entered the court wearing his postal service jacket. He has been released on his own recognizance pending a May 8 trial.

He will only be allowed to leave his Florida house to go to court or if there is a medical emergency.

Hughes will not be able to operate an aircraft of any kind and is barred from coming near the White House or on Capitol grounds.

When asked if he understood the charges against him and restrictions of his release, Hughes, who was wearing glasses and used headphones to hear the judge better, said, “I do.”

Hughes was arrested after he flew his ultra light gyrocopter through closely protected airspace and landed on the West Lawn of the Capitol.

He announced his plans on the Internet and told his hometown newspaper in advance.

Stunned tourists watched Wednesday afternoon as Hughes flew near the Capitol. Hughes claimed he was delivering letters to all 535 members of Congress in order to draw attention to campaign finance corruption. Instead, many say, Hughes refreshed concerns about safety in what’s supposed to be heavily protected airspace.

House Homeland Security panel Chairman Michael McCaul, R-Texas, said the pilot landed on his own, but that had he made it much closer to the Capitol authorities were prepared to shoot him down.

"Had it gotten any closer to the speaker's balcony they have long guns to take it down, but it didn't. It landed right in front," McCaul said.

Secret Service spokesman Brian Leary said media reports earlier in the day claiming the Secret Service Tampa Field Office had been alerted to the flight in advance were not true.

"The subject involved in today's incident had come to the attention of the USSS approximately one and a half years ago," Leary said. "On October 4, 2013, the Secret Service obtained information from a concerned citizen about an individual purporting their desire to land a single manned aircraft on the grounds of the United States Capitol or the White House." He added a complete investigation was conducted at the time.

The Federal Aviation Administration said the pilot had not been in contact with air traffic controllers and the FAA didn't authorize him to enter restricted airspace.

Airspace security rules that cover the Capitol and the District of Columbia prohibit private aircraft flights without prior coordination and permission. Violators can face civil and criminal penalties.

The White House said President Obama had been briefed on the situation.

Witnesses said the craft approached the Capitol from the west, flying low over the National Mall and the Capitol reflecting pool across the street from the building. It barely cleared a row of trees and a statue of Gen. Ulysses Grant. The gyrocopter landed hard and bounced and the pilot was quickly arrested.

One witness told The Associated Press that when the aircraft landed, police with rifles yelled at the pilot not to move, and told bystanders to run, with their heads down.

About two hours after the landing, police said a bomb squad had cleared the aircraft, and that authorities would be moving it to a secure location.

The incident once again thrusts Washington’s airspace into the spotlight. In January,a quadcopter drone crashed onto the White House grounds, sparking calls for tighter security.

A gyrocopter resembles a small helicopter. However, unlike a helicopter, a gyrocopter’s blades are not powered, with the aircraft relying instead on an engine-powered propeller to provide thrust. Often used as recreational aircraft, gyrocopters have also been deployed in law enforcement.