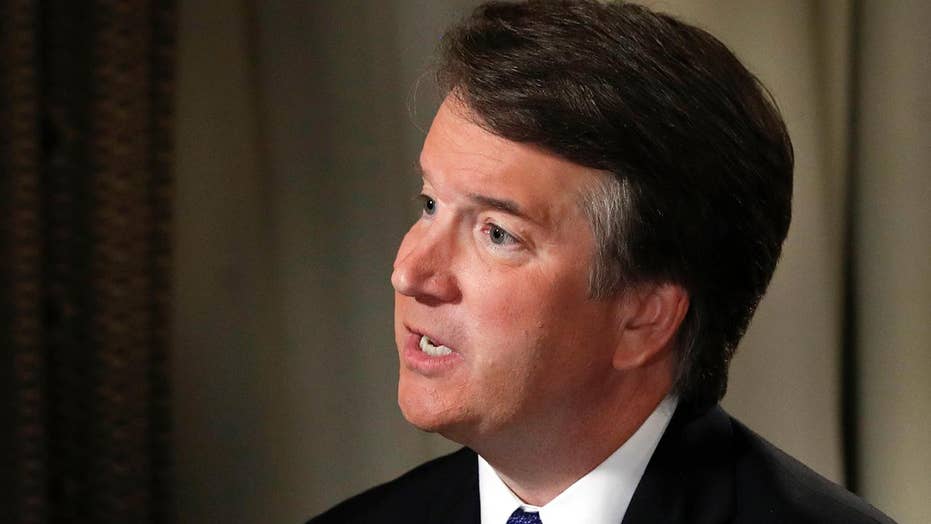 Senate Judiciary Committee chairman Chuck Grassley, R-Iowa, on Tuesday rejected the requests from Democrats to delay a key hearing on the nomination of Brett Kavanaugh to the Supreme Court.

Kavanaugh and Christine Blasey Ford, who has accused the federal judge of sexual assault during a party when they were in high school, are due to testify before the committee on Thursday. Kavanaugh has denied Ford's allegations.

In a letter to ranking member Dianne Feinstein, D-Calif., Grassley wrote: "I am not going to silence Dr. Ford after I promised and assured her that I would provide her a safe, comfortable, and dignified opportunity to testify ... There is no reason to delay the hearing any further."

Grassley added that any further delay would be unfair to both Ford and Kavanaugh, whom Grassley said "has asked the Committee repeatedly for the chance to testify as soon as possible ... We can no longer stand in the way of him presenting his testimony before the Committee."

Feinstein had asked for the hearing to be delayed after the New Yorker magazine published claims by Deborah Ramirez, a Yale classmate of Kavanaugh who says he exposed himself to her while drunk at a college party in the 1980s. Kavanaugh has denied that allegation as well.

Feinstein also asked that the committee refer Ramirez's allegations to the FBI along with Ford's claims.

Also Tuesday, the committee announced that it had tentatively rescheduled a vote on Kavanaugh's nomination for Friday morning. Grassley took to Twitter to add that the hearing was added to the committee's schedule as required by it rules.

"After [hearing] Dr Ford & Judge Kavanaugh’s testimony- if we‘re ready to vote, we will vote," he tweeted. "If we aren't ready, we won't."

In a statement, Feinstein said the committee's action in scheduling a vote was "outrageous."

In response, Sen. Lindsey Graham, R-S.C., told Fox News' "The Story" that Grassley had "bent over backwards to be fair" to both Ford and Kavanaugh.

"Dr. Ford is being abused as much as anybody else," Graham told Martha MacCallum. "She’s been a victim of this as much as Kavanaugh has."

Graham added that Kavanaugh "is not Bill Cosby. He is not [Harvey] Weinstein. He's lived a good life. This is an allegation 35 years old that’s unverified and I’m not going to ruin his life based on that. Show me something credible, they’ve yet to do it."

Fox News has been told Grassley and Feinstein are expected to give opening statements to kick off Thursday's hearing, followed by Christine Blasey Ford, who would speak with no time limit.

That would be followed by a round of five-minute questioning periods for each senator, who could turn over questioning to other counsel. The process would repeat for Kavanaugh.

Fox News has learned that Judiciary Committee staffers interviewed Kavanaugh by phone about the Ramirez allegations on Tuesday. A source familiar with the call told Fox News that Republican staffers led the interview, while Democratic aides listened without asking any questions. Another source told Fox News that Democratic staffers were told about the call with Kavanaugh 15 minutes before it took place, giving them no time to prepare.

The allegations by Ford, who went public with her claims Sept. 16, have caused cracks in what initially appeared to be a smooth path to confirmation for Kavanaugh. Multiple Republican senators have told Fox News that they want to hear Ford's testimony before deciding which way to vote on Kavanaugh's nomination.

Sen. Susan Collins of Maine, a key undecided Republican, told reporters she will be "glued to the television" during Thursday's hearing.

However, GOP lawmakers sounded more bullish about Kavanaugh's chances on Tuesday, with some discussing keeping the Senate in session this weekend so that they can begin the process of confirming Kavanaugh right away.

"I go into the hearings with very positive feelings about him, and I hope Thursday goes well," Sen. Bob Corker, R-Tenn., told reporters.

TUCKER CARLSON: IF GOP WON'T BACK KAVANAUGH, VOTERS SHOULD DO THIS

Minority Leader Chuck Schumer, D-N.Y., retorted that McConnell owed Ford an apology for asserting that the Democrats' use of the women's accusations was a smear campaign. Schumer said McConnell's comment "demeans many, many women."

A successful committee vote is not necessary to advance Kavanaugh's nomination to the full Senate. Current Supreme Court Justice Clarence Thomas received no recommendation from the Judiciary Committee in 1991, but was still confirmed by the Senate. Conversely, Robert Bork received an unfavorable recognition from the committee in 1987, though his nomination was rejected by the full Senate.