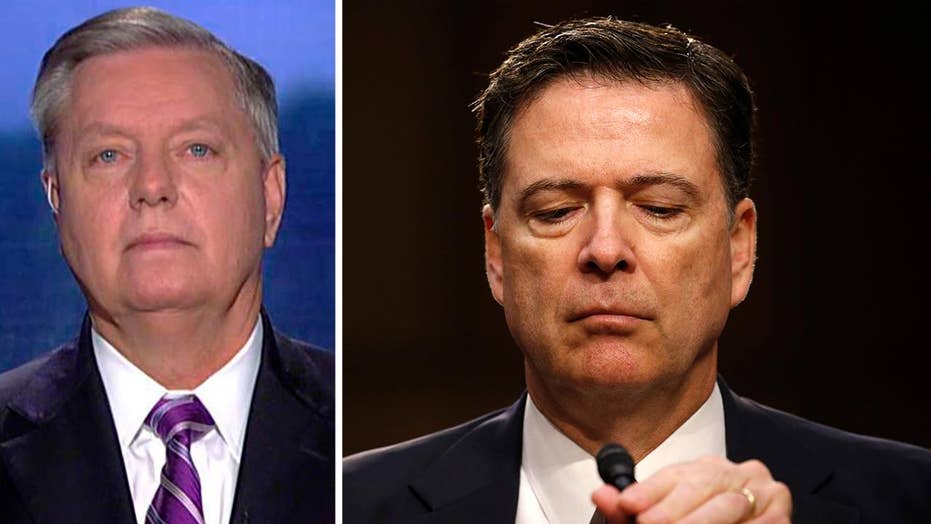 Sen. Graham: Comey needs to come back and testify again

Sen. Lindsey Graham threatened Thursday to subpoena James Comey, in the latest escalation in Republicans’ effort to haul back the former FBI director to Capitol Hill so he can address alleged discrepancies in his testimony about the Hillary Clinton email case.

Asked if he would subpoena Comey should he not testify voluntarily, Graham said: “I would, yes.”

Comey is back under the congressional microscope after details emerged of interviews with FBI staffers suggesting the former bureau boss drafted an exoneration statement for Clinton weeks before interviewing her and ultimately recommending against charges in the email case.

Comey has not publicly addressed the claims, but they would appear to be at odds with some of his statements to Congress – and the notion that he could have drafted such a statement before the case was closed has fueled Republicans complaints all the way up to the White House about the handling of the investigation last year.

“We now know that he had made up his mind to exonerate her before he even interviewed her, which is a bit odd,” Graham said.

The senator noted that Comey testified earlier this year he spoke out on the Clinton case in July 2016 out of concern for the impartiality of the investigation after then-Attorney General Loretta Lynch met with former President Bill Clinton on an Arizona tarmac. Graham said Comey also told people the real reason he jumped into the case was he thought the Russians had an email between the Democratic National Committee and Justice Department “trying to rig the Clinton investigation.”

The ex-director also told a House committee last year he made the decision to recommend against charges after Clinton was interviewed.

He added, “There is so much to be determined here. Comey needs to come back. What was his real reason for clearing Hillary Clinton? Had he made up his mind before he even talked to her?”

Graham spoke to Fox News one day after it was revealed the Justice Department will not allow FBI staffers to talk to members of the Senate Judiciary Committee.

The DOJ seemed to cite concerns about interfering with the ongoing special counsel probe into Russian meddling in the 2016 election.

But Rybicki, a former Comey chief of staff, and another bureau official also were the individuals whose interviews with the Office of Special Counsel pointed to Comey drafting an exoneration statement in advance.

Grassley and Feinstein have been trying to get access to Rybicki and Ghattas since July, wanting to question them about Comey’s controversial firing by President Trump and other issues.

The White House is also turning up the heat on Comey, with Press Secretary Sarah Sanders saying Tuesday the DOJ should consider prosecuting him for various alleged “improper” actions. Sanders said the former FBI director “politicized an investigation by signaling he would exonerate Hillary Clinton before he ever interviewed her or other key witnesses.” On Wednesday, she homed in on Comey’s acknowledgement that he leaked his own notes about conversations with the president.

Sanders said, “Leaking FBI memos on a sensitive case, regardless of classification, violates federal laws including the Privacy Act, standard FBI employee agreement and non-disclosure agreement all personnel must sign. I think that’s pretty clean and clear that that would be a violation.”

“If you have evidence of a crime, instead of sharing it with a gaggle of reporters, share it with the people who can actually do something about it, that would be my advice,” he said.

But Gowdy went on to blast Comey, saying it’s “beyond dispute that he made up his mind not to charge Secretary Clinton before he interviewed her.”

He said the new revelations suggest “he may well have made up his mind before he interviewed the last dozen witnesses.”

“There’s sufficient factual basis to bring him in and ask him, 'when did you make up your mind that you were not going to charge Secretary Clinton?'” Gowdy said.

Comey had been at the center of not only an Office of Special Counsel investigation but a Justice Department inspector general probe over the FBI’s handling of the Clinton case.