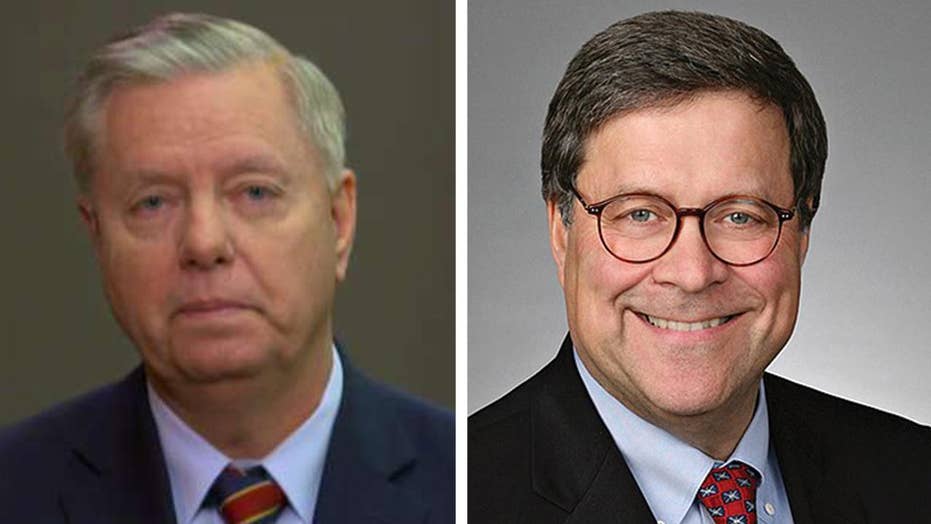 Sen. Graham to fight to make sure William Barr is confirmed

Republican senator speaks out on the importance of the attorney general nominee being confirmed on 'Sunday Morning Futures.'

South Carolina Republican Sen. Lindsey Graham told Fox News on Sunday that Saudi Arabia's military "can't fight out of a paper bag" when confronted with Mideast challenges including Iran, and insisted that the U.S. has the necessary leverage to punish the Saudi leadership for its apparent role in the murder of dissident writer Jamal Khashoggi.

“Let me put it this way -- I want to be very blunt with you," Graham told host Maria Bartiromo on "Sunday Morning Futures." "If it weren't for the United States they’d be speaking Farsi in about a week in Saudi Arabia."

Graham's remarks deepened his unusual divide with the White House on the issue. In an equivocal statement last month that highlighted the complexities of U.S. interests in the Middle East and Saudi Arabia's role in advancing American interests there, President Trump indicated it was not clear in his mind whether Saudi Crown Prince Mohammed bin Salman ordered Khashoggi's death.

However, Graham echoed his colleagues in saying that classified intelligence briefings provided to members of Congress strongly suggested a different conclusion.

"Their military can't fight out of a paper bag."

“It's the most brilliant briefing I've ever received in my time in Congress," Graham said. "You had two analysts that walk us through the crown prince's focus on Mr. Khashoggi for about two years. This operation was very sophisticated.

"The person in charge of executing the operation is MBS’s right-hand man," Graham continued, using the three-letter acronym to refer to bin Salman. "There is no doubt by any senator who received this briefing that MBS was complicit in the murder of Mr. Khashoggi."

Republican Sen. Marco Rubio of Florida, speaking on CNN's "State of the Union," backed up Graham on Sunday, telling host Jake Tapper: "We don't need direct evidence that he ordered the code red on this thing."

Khashoggi, a dissident who opposed Saudi Arabia's military intervention against Iranian-backed forces in Yemen, disappeared after he entered the Saudi Consulate in Istanbul, Turkey in early October.

Both Democrats and Republicans say the Saudis must pay a price for the death of columnist Jamal Khashoggi; chief congressional correspondent Mike Emanuel reports.

The CIA reportedly has concluded he was murdered inside, and Turkish officials have said more than a dozen people linked to bin Salman and Saudi intelligence entered and departed the country shortly before and after Khashoggi's death.

"The bottom line is that there is no way that 17 people close to him got a charter plane, flew to a third country, went into a consulate, killed and chopped up a man and flew back, and he didn't know about it, much less order it," Rubio told Tapper.

The U.S. has imposed a slew of sanctions against the individuals who U.S. intelligence has determined were involved in Khashoggi's apparent murder. But the White House has voiced fears that taking more aggressive action against Saudi Arabia might unnecessarily compromise U.S. strategic interests, as well as arms deals worth more than $100 billion.

"They give us 9 percent of our oil imports. We need them a lot less than they need us," Graham countered. "I don't buy this idea you've got to hook up to a murderous regime, a thug like MBS, to protect America from Iran. Quite the opposite. I think by hooking up with him we hurt our ability to govern the region.”

The influential South Carolina senator, who has built an unlikely friendship and close political alliance with Trump after bitterly opposing him during the 2016 presidential race, said the stakes are larger than Khashoggi alone.

"It's not just this dissident he's going after," Graham said. "He's going after others, people have been captured in other countries and brought back to Saudi Arabia because they've been critics in these countries. He put the Lebanese prime minister under house arrest in the most bizarre episode I've seen in 20 years and it goes on and on and on.”

Graham, who called bin Salman a "wrecking ball" and "crazy," said the prince's primary objectives have been to sever U.S. ties to Saudi Arabia.

"Well, we're going to label him complicit. We’re going to have a vote in the Senate saying that MBS was complicit in the murder of Mr. Khashoggi," Graham said. "I'm never gonna support any more arms sales to Saudi Arabia."