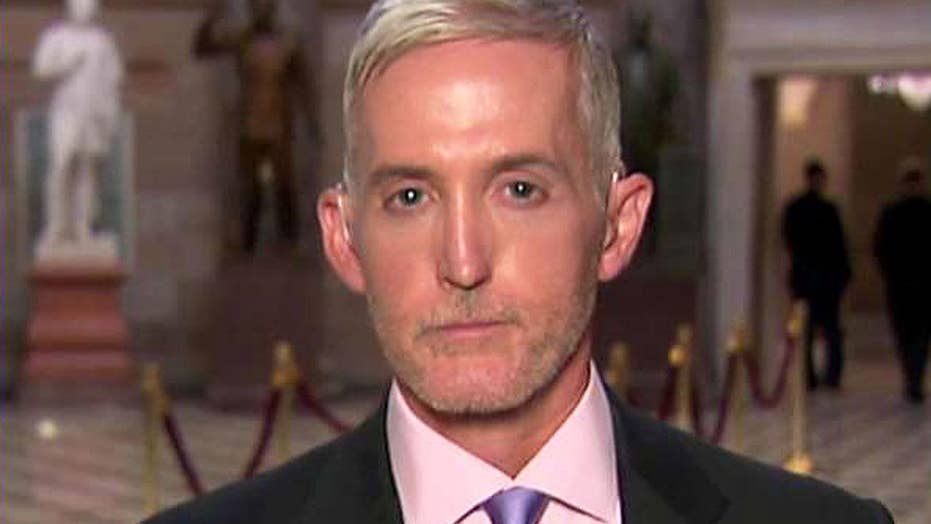 On 'The Story,' the congressman reacts the president's son-in-law's statement on Russia

Jared Kushner, the son-in-law and senior adviser to President Donald Trump, is set to meet with the House Intelligence Committee Tuesday as part of its investigation into possible Russian collusion with the Trump campaign during the 2016 election.

The meeting comes after Kushner met with Senate Intelligence Committee investigators for about three hours behind closed doors on Monday. Kushner also released an 11-page statement in which he denied working with Russia to influence the campaign, instead insisting that his father-in-law simply ran a “smarter” campaign with a “better message.”

Rep Trey Gowdy, R-S.C., previewed the meeting the House will hold with Kushner on Tuesday in an exclusive interview on "The Story with Martha MacCallum," stating that the probe is being handled in “exactly the way serious investigations are supposed to be conducted.”

PREEMPTIVE STRIKE: KUSHNER SCOOPS SENATE WITH 'DID NOT COLLUDE' STATEMENT

“You examine a witness, you cross-examine the witness, you look for corroboration or contradiction,” Gowdy said. “You don’t use anonymous sources and selective leaks and prejudge the outcome. What’s happening tomorrow, us interviewing a witness, is exactly what we should be doing. His statement is helpful, it provides a roadmap. I have additional questions both based on what he said and things that there were not said in his 11-page statement. But for those who are not used to seeing how the way investigations are supposed to be run, this is how they’re supposed to be done.”

In Kushner's detailed statement, he denied any wrongdoing or collusion, particularly in regard to a meeting with a Russian lawyer who had promised potentially damaging information on then-candidate Hillary Clinton. Kushner’s comments, Gowdy said, could be corroborated.

“There is corroboration for what he said,” Gowdy stated. “What he said was, ‘I didn’t know what the meeting was about. As soon as I got into it, I realized I’m in the wrong place.’ So he sent two separate emails saying, ‘Can you please call me so I can have an excuse to get out of this meeting?’ So that’s what I mean by corroboration. The fact that he didn’t remember the name of the Russian ambassador until November the 9th. That is corroboration. That is what you’re looking for in investigations: a statement, and it’s either corroborated or contradicted. In this case, it’s corroborated.”

Gowdy also explained why he felt Kushner's meeting with the House should be held privately.

"Because members of Congress cannot behave themselves in public settings and every serious investigation," Gowdy said.

"You don’t know who the sheriff in your home county is talking to about the latest armed robbery," he continued. "Serious investigations are done without time limits and frequently without the political posturing you see in this town."