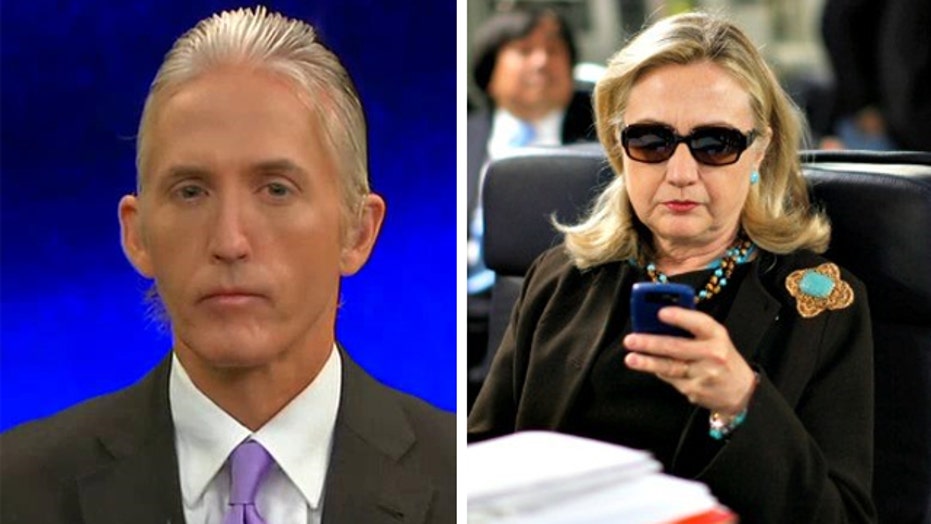 South Carolina Rep. Trey Gowdy said Sunday that Hillary Clinton will indeed testify Oct. 22 about her activities as secretary of state at the time of the Benghazi attacks but suggested that her demand for a one-time appearance will result in a long, hard day.

“We have agreed on the date,” Gowdy, a Republican and chairman of House’s Select Committee on Benghazi, told “Fox News Sunday.”

Gowdy said questions about Clinton’s growing email controversy will be part of the hearing only because they're relevant to his task of finding out what Clinton knew prior to the fatal Sept. 11, 2012, terror attacks on the U.S. outpost in Benghazi, Libya.

U.S. ambassador Christopher Stevens and three other Americans were killed in the attacks.

Clinton was secretary of state from 2009 to 2013. Among questions still being pursued are how much did the Obama administration know about the possibility of a terror attack and did the outpost have adequate security.

The email controversy essentially centers on Clinton using a private server and email accounts while serving as the country’s top diplomat.

“Had she not had this email arrangement with herself, you wouldn't be talking to me this morning,” Gowdy told Fox on Sunday. “So, my focus is on the four murdered Americans in Benghazi. But before I can write the final definitive accounting of that, I have to make sure that the public record is complete.”

Clinton, the front running Democratic presidential candidate, has said she had no knowledge of sending or receiving information marked as classified, that she has done nothing wrong and intends to cooperate with investigations.

However, thousands of pages of her emails publicly released in recent months show she received messages later marked classified, including some that contained material regarding the production and dissemination of U.S. intelligence information.

And a recent inspector general probe raised concerns about whether classified information had traversed the email system, resulting in a counterintelligence referral being sent to the Justice Department. However, the referral did not allege criminal wrongdoing.

Intentionally transmitting classified information through an unsecured system would appear to be a violation of federal regulations.

“I won't get down in the mud with them,” she said. “I won't play politics with national security or dishonor the memory of those who we lost. I won't pretend that this is anything other than what it is, the same old partisan games we've seen so many times before.”

Gowdy, a former federal prosecutor, has repeatedly declined to comment on whether he thinks Clinton broke federal law with what he calls her “unique email arrangement.”

However, he said Sunday that he has confidence in the FBI’s handling of the server, which Clinton turned over last week, after repeated requests, and that the agency will be the neutral observer for which he has asked.

“I think (the FBI is) the premiere law enforcement agency in the world,” Gowdy said. “I think that they're as apolitical as anything can be in this culture, and I think they're going to go wherever the facts take them.”