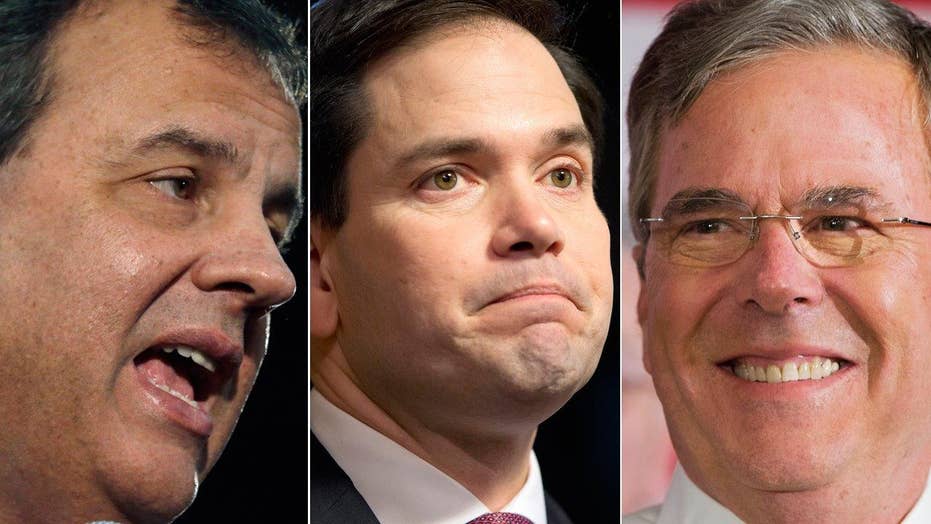 After a weekend of relentless attacks against Marco Rubio during and after Saturday night’s Republican debate — led by Chris Christie and picked up on by Jeb Bush — the big question going into Tuesday's New Hampshire primary is whether it was enough to bring the surging freshman Florida senator back to the pack in the race for second place.

The governors in the race are now fighting to mount a comeback Tuesday, aiming to exploit the potential opening after Rubio stumbled in the face of Christie’s debate-stage attacks. But for all the heat on Rubio, the latest tracking poll results posted Monday morning from 7News/UMass showed Rubio dropping just a point and Christie gaining by the same amount.

Christie, for his part, has been unrelenting in questioning Rubio’s readiness and authenticity. At Saturday’s debate, he slammed the senator for repeatedly reciting anti-Obama “talking points” and on Monday told MSNBC Rubio is “not a leader” and “doesn’t have the experience to know what to do in pressure situations.”

On ABC’s “Good Morning America,” he declared the race is wide open.

The three top current and former governors in the GOP race – Christie, Bush and Kasich -- were shut out of the Iowa leaderboard last week, a contest dominated by the two senators in the race as well as billionaire businessman Trump.

Trump, who placed second to Cruz in Iowa, still leads by double digits in most New Hampshire polls, but the race for second and third is tight.

Cruz and Rubio are in contention, but the three with gubernatorial experience are in the mix, too. While Rubio’s numbers had been rising since his third-place finish in Iowa, analysts – and his opponents – wonder if his debate stumble will disrupt his “Marcomentum.”

Bush, on MSNBC, also took a swipe at Rubio, saying voters don’t want a president “who is scripted” and calling Rubio a “work in progress.”

Speaking on Fox News, Bush said he’s also going to continue taking on front-runner Trump, as he did during Saturday’s debate.

“He’s not a conservative; he doesn’t have the temperament to be president and whenever I have the chance to describe what I think about him, I’m gonna do it,” Bush said.

Bush hammered Trump on Saturday for his broad support of eminent domain – and Trump's past attempt to use it to take a woman’s property for a project in Atlantic City. During that dispute, Trump tried to “shush” Bush, but was booed by the audience.

Bush pointed to that exchange in questioning how Trump would do in a general election race.

Kasich, meanwhile, has taken a less confrontational approach in the race, casting himself as a uniting force and touting his economic record as governor. The governor has seemingly pinned his hopes on New Hampshire and said Sunday he’s going in strong – while stressing he also has substantial resources on the ground in states like South Carolina and Nevada.

“I have an army of people … the best ground game,” Kasich said.

Rubio, though, has dug in and continued to repeat his criticism of President Obama that drew Christie’s scorn at Saturday’s debate.

Rubio was back on message Sunday. "People said, `Oh, you said the same thing three or four times.' I'm going to say it again," Rubio said in Londonderry, N.H.

“As far as that message, I hope they keep running it. And I'm going to keep saying it because it's true," Rubio said on ABC’s “This Week.” "Barack Obama … said he wanted to change the country. He's doing it in a way that is robbing us of everything that is special.”

Trump, meanwhile, appears to be in a solid position going into Tuesday, despite Bush’s attacks.

At a New Hampshire rally on Sunday, Trump urged supporters to get to the polls.

"If you're not going to vote for me, do not vote," he dead-panned.

For Christie, the challenge will be reversing what has been a slide in the New Hampshire polls over the last several weeks.

Retired neurosurgeon Ben Carson and former HP CEO Carly Fiorina also are looking to do better than they did in Iowa, but have struggled to even break into the middle tier in Granite State polling.