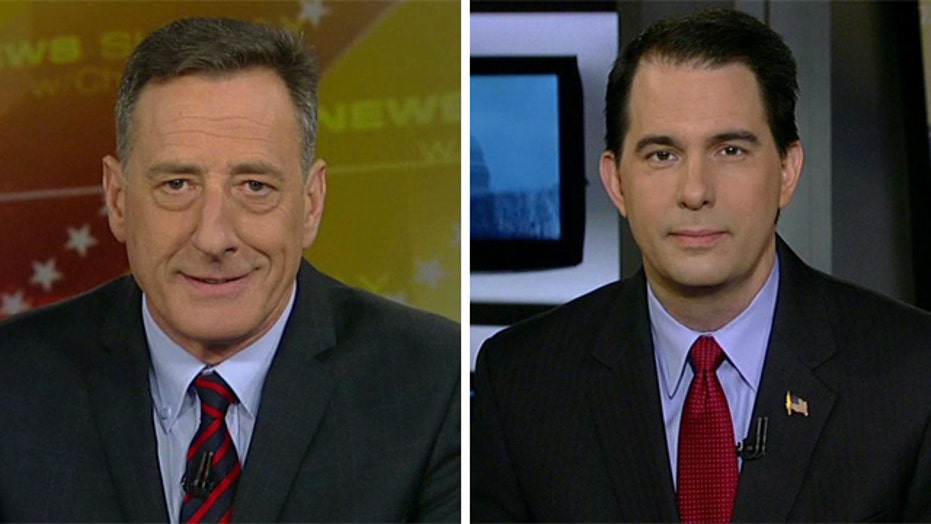 The political divide over ObamaCare and other key issues appears just as wide among states as it does in Washington, as Republican and Democratic governors aired their differences this weekend in Washington.

“They want to make a political point [and] are hurting their constituents,” he said while pointing a finger at Wisconsin GOP Gov. Scott Walker, who turned down $119 million in federal money to expand Medicaid through ObamaCare.

Walker defended his decision, telling Fox News the state was able to meet residents’ health-care needs without “putting taxpayers at risk” for the money.

Shumlin had to defend problems with the Vermont-run ObamaCare website like those that occurred on the federal exchange, HealthCare.gov.

He acknowledged that small businesses still cannot use the site but said the problems are getting fixed.

“There isn't an exchange in the country that hasn't had a challenge of the rollout,” Shumlin said.

He also said Republican governors elected in 2010 have failed to create jobs and restated remarks he made at the start last week of the National Governors Association meeting in Washington about the Tea Party wing of the Republican Party pursuing a social agenda that goes after women’s health issues, gays and working Americans.

Walker disagreed, pointing to Milwaukee, where private-sector job growth from April through December 2013 was better than it had been since 1994. And Florida GOP Gov. Rick Scott has brought the unemployment rate down 5 percent, he said.

Democratic Govs. Martin O'Malley, of Maryland, and Dannel Malloy, of Connecticut, made pitches to raise the minimum wage.

Malloy told CNN’s “State of the Union” the vast majority of people earning a minimum wage are trying to raise a family, and the minimum wage needs to keep up with inflation.

GOP Gov. Bobby Jindal, Louisiana, on CBS’ “Face the Nation” called for more freedom from federal regulations and for the opening of the Keystone XL pipeline. He also said delaying ObamaCare mandates would boost the economy.

Jindal later said Republican governors going to the White House on Monday hope to talk with President Obama about him using his executive power to jump-start the economy.