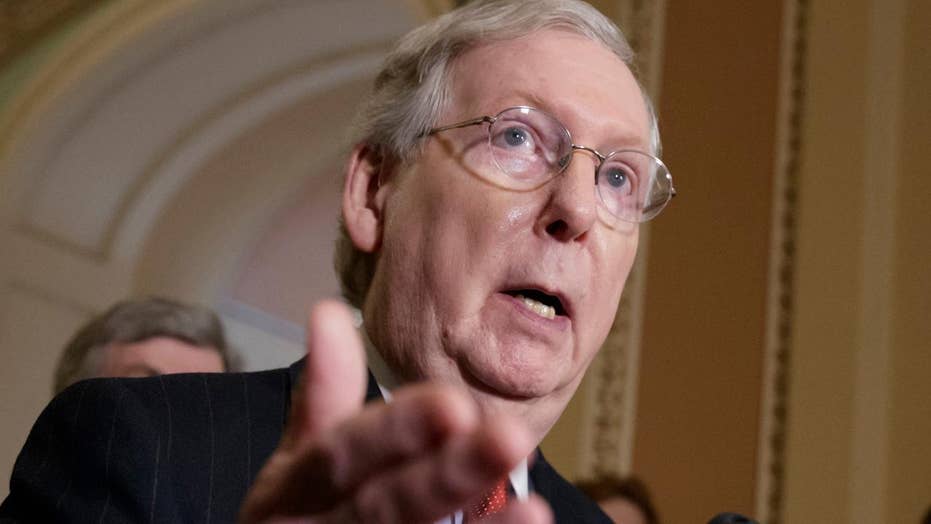 McConnell vows Gorsuch will be confirmed

The Senate Judiciary Committee voted Monday along party lines to endorse Judge Neil Gorsuch for the Supreme Court, setting up a showdown between Democratic and Republican senators in a series of final votes expected later this week.

“The nominee’s opponents have tried to find a fault with him that will stick. And it just hasn’t worked,” said committee Chairman Sen. Chuck Grassley, R-Iowa, who allowed all 20 members to speak before the final vote. “Judge Gorsuch is eminently qualified. He’s a mainstream judge who’s earned the universal respect of his colleagues on the bench and in the bar. He applies the law as we in Congress write it.”

Despite such praise from the GOP side, all Democrats on the committee voted against the nominee, in a sign of the clash to come as the nomination advances to the full Senate.

The chamber’s Democratic leaders appear ready to try to hold up the nomination through what's known as a filibuster. Republicans have 52 senators and would need the support of eight Democrats to reach the 60 votes necessary to overcome a filibuster and head to a final vote.

That appears out of reach. Prior to the committee vote, more than 40 Democrats said they were willing to block the Gorsuch nomination -- increasing the likelihood that majority Republicans would use the so-called "nuclear option" to push the nomination through.

California Sen. Dianne Feinstein, the committee’s top Democrat, returned to her party’s repeated argument that Judge Merrick Garland, former-President Barack Obama’s nominee, should have been considered for the Scalia seat, but leaders of the Republican-controlled Senate held off until after the 2016 presidential election.

Feinstein also revisited a ruling Gorsuch made on the 10th Circuit Court of Appeals, in Colorado, in which he sided with a company that fired a trucker for disobeying orders by unhitching his vehicle from a malfunctioning tractor-trailer and driving off -- after waiting hours for help in sub-zero temperatures.

“So this is not the usual nominee,” she said. “Therefore, I cannot support the nominee.”

They are Sens. Joe Donnelly, of Indiana; Heidi Heitkamp, of North Dakota; and Joe Manchin of West Virginia -- all representing states Trump won in November and all up for re-election next year.

He was noncommittal on whether he was prepared to trigger to so-called "nuclear option," a change in precedent that would allow the Senate to break the filibuster with a simple majority of 51 votes.

But on Monday, a Republican colleague spoke bluntly and indicated the party would go that route. South Carolina GOP Sen. Lindsey Graham, a Judiciary committee member, said: “This will be the last person subject to a filibuster. … Ironically, we are going to change the rules … for somebody who has been a good judge over such a long time.”

Senate Minority Leader Chuck Schumer, D-N.Y., predicted Sunday on NBC's "Meet the Press" that Gorsuch would not pass the 60-vote benchmark and argued that Trump should "try to come up with a mainstream nominee."

Illinois Sen. Dick Durbin, a Democrat on the committee, like Feinstein argued that Gorsuch had too often sided against the “little guy.”

“In case after case, he favored corporations, lawyers and the special interest elite … over workers, consumers, people of disability and victims of discrimination,” he said.

Utah Sen. Mike Lee, a Republican on the committee, said Gorsuch likely thought the firing of the trucker was “foolish.”

“But that wasn’t the question before him,” Lee said. “The law, as he carefully analyzed it, would not allow judicial intervention.”