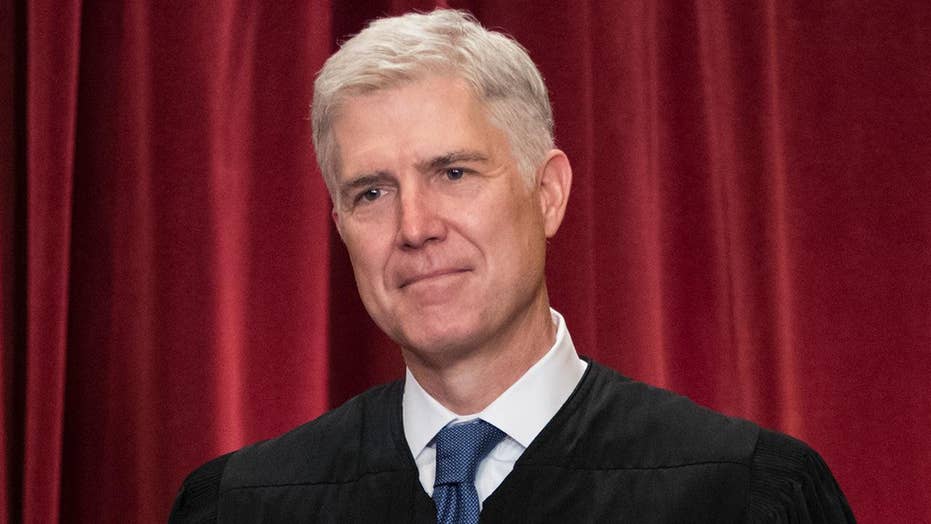 The newest member of the Supreme Court already is making his mark after just three months on the job, effectively restoring a conservative tilt to the bench in decision after decision – amid mounting speculation over whether President Trump could soon have the chance to pick a second justice.

Neil Gorsuch, who joined the court in April, helped the court round out its term with a rapid-fire set of decisions reinstating much of Trump’s travel ban for now, siding with a Missouri church in a dispute over state funding and more.

Having officially settled into the role, Gorsuch and his family are planning to make the permanent move to Washington this summer. He spent the July 4 holiday back home in Colorado — but after riding along the parade route in the back of a 1959 Cadillac with his wife and daughter and posing for photos with neighbors, he and the family are putting their Boulder County home on the market.

With lifetime job security, there’s no going back – to the delight of conservatives who fought for his appointment to the high court, filling the seat held by the late Antonin Scalia.

Take the court's final week of work in June. In the biggest ruling this term, Gorsuch agreed officials in Missouri were wrong to deny competitive state grants to a Lutheran church, in order to improve its preschool playground.

While the majority limited its holding by not addressing "religious uses of funding,” Gorsuch made clear he would have gone further, writing separately, "The general principles here do not permit discrimination against religious exercise -- whether on the playground or anywhere else."

Gorsuch helped secure other outcomes as well, while at times splitting off from the other justices:

-- In the final sweep of decisions, the court allowed Trump's executive order imposing a temporary travel ban on six mostly Muslim countries to partially go into effect, a compromise that gave both sides a chance to claim victory. But Gorsuch -- joined by Justices Samuel Alito and Clarence Thomas -- thought the presidential action should be enforced entirely, with no restrictions.

-- Gorsuch and Thomas disagreed with the court's denial of an appeal over gun rights and a California law restricting the ability of citizens to carry a concealed weapon in public for self-protection.

-- Gorsuch dissented in the court's summary judgment that tossed out an Arkansas law preventing same-sex couples from having both names on a child's birth certificate. Gorsuch wrote there was "nothing wrong" with a traditional approach of listing just the biological parents on the state form. In doing so, Gorsuch indirectly criticized Justice Anthony Kennedy, based on the landmark 2015 ruling allowing same-sex marriage, which the elder justice authored.

"Nothing in Obergefell  [ruling] spoke -- let alone clearly -- to the question whether (the Arkansas law), or a state supreme court decision upholding it, must go," Gorsuch said.

Gorsuch, who turns 50 next month, has wasted little time jumping into the ideological scrum of Supreme Court arguments and deliberations. In his very first oral argument in April, the junior justice's pointed questions of counsel took about 10 minutes of the one-hour debate.

He was so persistent, at one point he apologized “for taking up so much time" with his questions.

That assuredness has come with a clearly defined legal lens —staking out consistent positions in line with conservative Justices Thomas and Alito — and even going beyond.

Although the count covered just 13 cases, Gorsuch voted with Thomas 100 percent of time, and all but once with Alito.

Kennedy – who incidentally was Gorsuch’s mentor when the Colorado native clerked for him during the 1993 term – is the other justice in the spotlight these days.

Rumors of his imminent retirement came and went as the court embarked on its annual three-month summer recess. Kennedy did not leave, apparently ready to return for his 31st year on the court as its influential "swing" justice. And the justice — who turns 81 this month — is not talking.

But that has not stopped the Washington whispers, since the next Supreme Court vacancy promises to be a political and ideological game-changer.

"Justice Kennedy has been the deciding vote in favor of marriage equality, recently in favor of racial justice, whether it's through housing or in education through affirmative action programs," said Elizabeth Wydra, president of the Constitutional Accountability Center, a progressive legal group. "So it would be a strong shift of the court to the right."

Government sources say the White House is ready for any judicial opening, and will build its strategy on the successful Gorsuch nomination's template.

"It's likely that he's going to step down likely during Trump's presidency," said Carrie Severino, chief legal counsel at the conservative Judicial Crisis Network. "I'm glad to hear the administration is ready because they've got a great list that they're working with to have someone who is going to be faithful to the Constitution."

Kennedy and Gorsuch currently serve as the two bookends preserving the court's shaky right-leaning majority. The moderate mentor and his conservative protégé are at different points on the ideological spectrum but united in similar personalities: easy-going, courteous, reflective.

And while Gorsuch attracts widespread attention, Kennedy remains the most-powerful member given his ‘swing vote’ status.

That dynamic may not last. And if Kennedy exits, the same groups that backed Gorsuch – like JCN – are prepared to do the same for the next nominee.

The new term that begins in October promises more fireworks, regardless of the makeup of the court.

At least three big cases are teed up for argument by year's end:

-- The Trump revised travel ban and the constitutional limits of executive authority over immigration. The White House frames the issue as a temporary move involving national security. A coalition of groups in opposition call the order blatant religious discrimination, since the six countries involved have mostly Muslim populations: Iran, Libya, Somalia, Sudan, Syria and Yemen.

A major sticking point for the justices will be navigating how much discretion the president has over immigration. Courts have historically been deferential in this area, and recent presidents have used it to deny entry to certain refugees and diplomats, including from nations such as Iran, Cuba and North Korea.

-- Partisan gerrymandering and just how far a state legislature may go to create an election map favoring one party. Federal courts have struck down Wisconsin's 2011 voting boundaries, and the justices could finally be ready to decide a workable legal standard for determining when such maps are impermissibly extreme.

-- Religious liberty and the case of a Colorado baker who refused to create a custom-made wedding cake for a same-sex couple. The businessman cited his sincerely held Christian beliefs, but lower courts found he violated the state's "public accommodation" law by discriminating based on sexual orientation.

"This issue has been percolating for a long time," said Thomas Dupree, a former top Justice Department attorney. "This is the sort of issue that I suspect we're going to see the court returning to in the years ahead, particularly if they solidify a five-justice conservative majority, more decisions in this First Amendment freedom of religion."

Other cases that will percolate to the court in coming months cover gun rights, personal privacy in the digital age, state-funded tuition benefits for illegal aliens, and foreign detainees held in Guantanamo.

But now more than ever, the court's unapologetic "swing vote" will continue flexing his judicial power on a dizzying mix of hot-button cases.

Months of internal turmoil over the Scalia vacancy and Gorsuch's raucous confirmation left a strategic void that makes Kennedy's unique jurisprudence that much more coveted among his colleagues. As the court returns to a temporary period of normalcy, he quietly thrives.

Do the math: the four reliable liberals and four reliable conservatives now orbit around Kennedy's moderate-conservative credentials, knowing he almost inevitably will provide the crucial deciding vote. While the justice mostly holds to the right, he can move comfortably away when he sees fit.

For however long he chooses to stay, it will in many ways remain Kennedy's court.