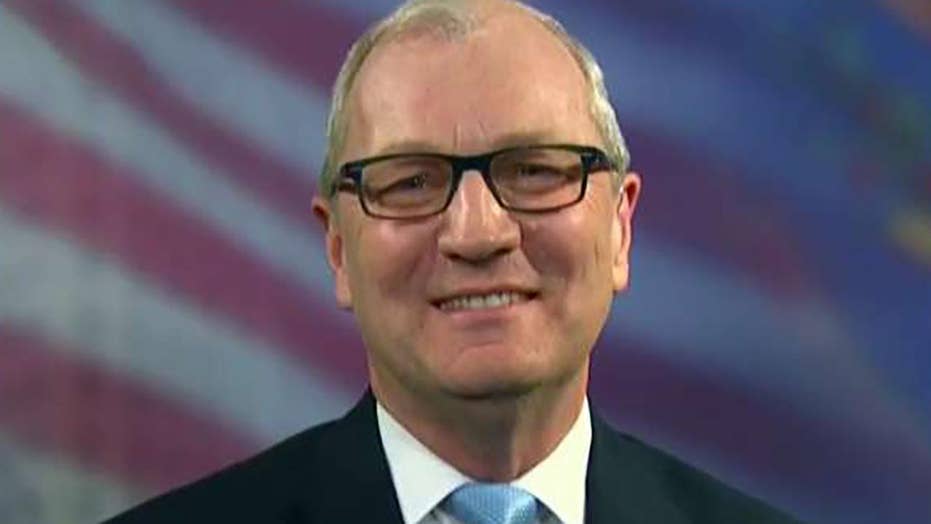 Republican congressman from North Dakota says the Justice Department should respect congressional oversight authority and comply with subpoena for information on anti-Trump dossier.

North Dakota Republican Rep. Kevin Cramer plans to announce Friday that he will run for Senate against Democratic incumbent Heidi Heitkamp, reversing an earlier decision to seek re-election in the House, Fox News has learned.

A Facebook invitation went out Thursday for a “Cramer for Senate Announcement & Rally” in Bismarck, N.D.

A high-level campaign official confirmed to Fox News that he will announce a Senate run.

The decision is sure to come as a relief to Washington Republicans who had been pressuring him to reconsider his decision last month to stay put in the House.

With Democrats fighting hard to seize control of the House this fall, Republicans are determined to hold onto their narrow majority in the Senate, now at 51-49. Heitkamp, a Democrat in a deep-red state that went overwhelmingly for President Trump in 2016, is thought to be one of the most-vulnerable senators this cycle. But until now, Republicans had failed to recruit Cramer to run against her.

Cramer, a staunch Trump ally, acknowledged earlier this week that he was being pushed to reconsider by forces both in Washington and in North Dakota. Trump reportedly was among those applying pressure.

The congressman said at the time he was taking the calls under consideration.

The Hill reported earlier this week that former state GOP chairman and candidate Gary Emineth cited Cramer’s expected entry into the Senate race in his decision to drop out of the contest.

Party officials are likely to close ranks behind Cramer. A Heitkamp-Cramer matchup in the general election could be one of the fiercest of the 2018 midterms, as they both represent the same constituency; Cramer represents the entire state in the House.

Democrats, however, made clear Thursday they're ready to take on Cramer, drawing attention to a recent controversy over his use of campaign funds and claiming he does "what's best for his own interests."

"Voters will see right through Congressman Cramer and hold him accountable for a self-serving record that has hurt North Dakotans," Democratic Senatorial Campaign Committee spokesman David Bergstein said in a statement.

Cramer's change of heart comes as Sen. Bob Corker, R-Tenn., also is said to be reconsidering his decision to leave Congress at the end of his current term.