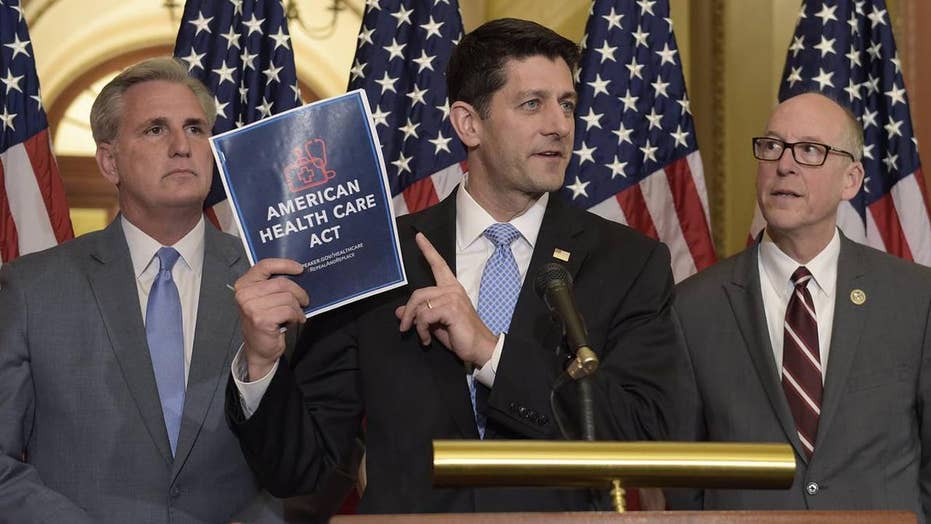 AHCA passes a hurdle, while Ryan tries to win over critics

Some senators are concerned about the final product the House will send them and the cost of the bill; Mike Emanuel explains on 'Special Report'

Members of Congress vote yes on a bill. They vote no on a bill.

There is no middle ground.

And if both houses of Congress voted today, the Republican ObamaCare replacement bill would fail.

And in this case, no.

That’s why House Speaker Paul Ryan, R-Wis., is vaulting into the highest-octane sales pitch of his career. The next several weeks could define his speakership.

He must successfully advance a health care package, adopt a budget blueprint and avoid a government shutdown by the end of April. Lurking down the line are fracases over the debt limit and tax reform.

On Thursday morning, it was as though stagehands from the Broadway production of “Hamilton” showed up in the House Radio/TV Gallery studio to prepare for Ryan’s weekly press conference.

Radio/TV Gallery staffer Ryan Dahl ripped his suit jacket detaching and moving the bulky, wooden lectern where lawmakers usually field questions from reporters so Ryan could maneuver about the stage, not tethered to the podium. Other aides wheeled in a TV monitor and synched up cables so the speaker could use a remote clicker for a slide presentation.

You know things are getting serious when a politician shows up for a photo-op or press conference with his shirt sleeves rolled up.

Everything went well for the speaker’s multi-media presentation with reporters. Ryan’s kids didn’t bound jauntily into the studio unexpected while he spoke.

His panicked wife didn’t slide across the floor Tom Cruise “Risky Business” style in stocking feet to extract the juvenile interlopers. But whether Ryan successfully marketed the health care bill to fellow conservatives is another story.

Republicans have campaigned on repealing and replacing ObamaCare for seven years. Just the fact that the speaker has to make such a carnival barker pitch to his own members speaks volumes.

In other words, yes or no. Lawmakers vote to repeal and replace ObamaCare with the current bill -- or they don’t. A binary choice.

Skeptics could use a harsher phrase: “Take it or leave it.”

President Trump promised at a meeting Friday of key House GOP committee chairmen: “We are going to get it done. … Something is going to happen very shortly.”

But here’s the trouble. When Ryan assumed the speakership, he promised rank-and-file members an open, bottom-up, member-driven process.

Much of the health care bill is codified in Ryan’s “A Better Way” agenda. But that doesn’t mean he has satisfied members who want to alter the bill.

White House Press Secretary Sean Spicer stoked those embers this week when he said “every member of the House and Senate will be able to have their opportunity to have amendments offered through the committee process and on the floor.”

That could translate to what’s called an “open rule” in the House by which any member may offer an amendment at any time. Typically, the powerful House Rules Committee decides what, if any, amendments are in order on a given piece of legislation.

Democrats permitted precisely two amendments when they advanced the first version of ObamaCare in November, 2009.

“I would just point-blank say I would encourage Mr. Spicer, if he thinks he’s going to start talking about my business, give me a darn call,” excoriated House Rules Committee Chairman Pete Sessions, R-Texas. “I try not to get in his business. I don’t appreciate him getting in my business.”

There’s a reason why Ryan doesn’t want much deviation from the original, base bill.

But considering a measure under the complicated budget reconciliation process shuts off filibusters. Republicans have no other option than to move the bill via reconciliation.

That creates another set of problems. The Senate mandates that only budgetary-fiscal provisions fall under the reconciliation process. In other words, making some policy changes could be dicey.

Secondly, packages under reconciliation cannot add to the deficit. In other words, Ryan thinks he’s astutely crafted a health care replacement bill that falls narrowly within the reconciliation window.

So major changes could blow that up.

“The last thing we want to do is prevent our ability to actually get law made,” he said. “This reconciliation tool is pretty tight. There's a lot of stuff we would love to put in the bill, but unfortunately the Senate rules don't allow us that.”

What stays in or out of the bill is up to Senate Parliamentarian Elizabeth MacDonough. She’s in charge of enforcing what’s called “The Byrd Rule,” named after the late Sen. Robert Byrd (D-W.V.). MacDonough oversees the “Byrd bath.”

This is a process of plucking out any provisions that don’t meet the reconciliation standards. The Senate refers to removed provisions as “Byrd droppings.” The Senate can vote to overrule MacDonough’s decisions -- but only with 60 votes.

There are currently 52 Republicans in the Senate.

The idea of sticking to Senate rules infuriates some conservatives.

“I think that’s a problem with this whole Byrd Rule and the way this works that some unelected parliamentarian can do that,” scoffed Rep. Jim Jordan, R-Ohio, a co-leader of the conservative House Freedom Caucus.

Jordan is a two-time NCAA Division I wrestling champion at the University of Wisconsin-Madison. It’s unclear if the congressman would endorse wrestling matches without referees.

But Jordan is incensed that lawmakers may be limited in their opportunities to change the bill.

“God bless the speaker. But that’s not how the legislative process is supposed to work,” said Jordan about Ryan’s push to curb amendments. “It’s not supposed to be closed off.”

“Somehow ObamaCare made it through reconciliation,” Brat said. “So how did they do that and we can’t?”

The answer is that Democrats advanced some of ObamaCare through budget reconciliation. Not all.

That could be an issue for members of the Freedom Caucus.

For years under the leadership of former House Speaker John Boehner, R-Ohio, conservatives often bit their tongue and reluctantly voted for a host of emergency bills to fund the government, grapple with tax issues and increase the debt ceiling.

Many believed leadership frequently promised opportunities to “fix” things on future bills, but those tomorrows never came. Thus, Freedom Caucus members are reluctant to buy Ryan’s promise of addressing other parts of ObamaCare down the road.

Democrats took this extraordinary step to curb filibusters on most executive branch nominees in 2013. Now Brat and others want to lower the bar to break filibusters on legislation to just a simple majority rather than the current 60-vote threshold.

That move would make the reconciliation process a moot point. Republicans could achieve their legislative goals on health care with just 51 yeas -- but not have to fit their bill neatly into the special confines of budget reconciliation and comply with the Byrd Rule.

“We just need some action over there,” said Brat of Senate Republicans. “They are hiding under their desks.”

Said Jordan: “I’m for what needs to be done.”

If not the “nuclear option,” some Republicans might back another tactic which would entail a wild, Senate parliamentary high-wire act.

If MacDonough ditches a provision in reconciliation, some conservatives want Vice President Pence to preside over the Senate, ignore her advice and rule the issue in question to be in order.

That gambit would turn the question on its head. Senate Democrats would then have to miraculously muster 60 votes to get the chamber to bounce the provision because it didn’t comply with reconciliation guidelines.

This parliamentary contrivance would entail buy-in from McConnell and Ryan. McConnell is an institutionalist who is very protective of the Senate’s rules and precedents.

Ryan is a former House Budget Committee chairman and is custodial when it comes to respecting the congressional budget process. Getting that duo to go along with such an artifice would take a lot.

Even so, there’s no guarantee that the Senate can even garner 51 votes to pass the replacement bill right now.

“Despite what you hear in the press, healthcare is coming along great,” the president recently tweeted. “It will end in a beautiful picture.”

Rep. Mark Walker, R-N.C., is chairman of the Republican Study Committee, the largest bloc of conservatives in the House.

He says group members will likely back the replacement bill if leaders attach two provisions.

One is a proposal from Rep. Morgan Griffith, R-Va., to allow states to mandate work requirements for some people to receive Medicaid. The other plan comes from Rep. Joe Barton, R-Texas. He wants the Medicaid expansion frozen at the end of the year.

However, Medicaid expansion is popular among many Republicans.

Ohio is a Medicaid expansion state, and Ohio GOP Sen. Rob Portman huddled this week with Pence and Price.

“We must provide stability and certainty for individuals and families in Medicaid expansion programs and real flexibility for states,” Portman said.

The key is tweaking the bill -- plus allowing in order and adopting amendments -- which generates precisely the right number of votes to pass the bill.

“Sometimes when you have pushback on one side and the other side from a political spectrum, you might have found the sweet spot,” said House Majority Leader Kevin McCarthy, R-Calif.

But again, if there are too many changes.

In the summer of 2009, the Democratically-controlled House tried to gin up the votes to approve major environment legislation known as “cap and trade.”

The massive amendment was a cavalcade of additions and fixes, all designed to court just the right number of members to pass the 1,200 page bill.

The manager’s amendment proved to be essential. The House OK’d the climate bill 219-212. Switch four votes and the bill would have failed.

Ryan contends Republicans can’t wander too far astray. And a massive, Pelosi-type amendment could upend the bill in reconciliation.

So it’s back to zero and one. Yes and no. They pass the bill or they defeat the bill.

And if Republicans can’t muster the votes, perhaps the only way to approve the bill may be to hack the system.